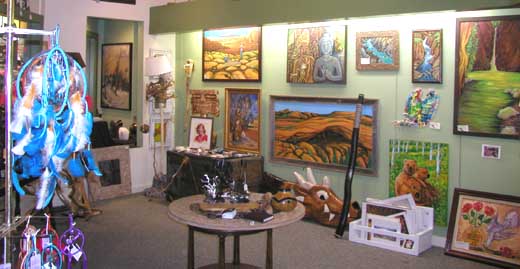 There comes a time in every good shopper’s life when they need to head to the mall to pick up an essential item. Perhaps something from Bath and Body Works, or Victoria’s Secret that you just can’t get at your local Target or Walmart. Maybe it’s that sale you’ve been waiting for at Nordstrom. During your grueling shopping day, you suddenly trip upon something that’s fairly unique and often unprecedented in the mall experience. It’s a gallery. An art gallery. How does fine art co-exist in a world of disposable consumer goods?

The downtown Crossroads Mall has three diverse galleries, each of which offers a distinctive art experience. The Art Is In , and the two Mainly Art Galleries couldn’t be more different from each other, but together offer a complete picture of the mall gallery experience.

If you happen to be at the Crossroads Mall and heading to the Southwest corner on your trip to the makeup counter at Nordstrom, you’ll run smack into two new galleries called Mainly Art, and Mainly Art 2 .

Perhaps you remember the Mainly Art name from last summer’s weekly outdoor event where artists converged to sell their wares on Main Street in downtown Salt Lake City. Two of the participing artists decided to take the art (and the name) indoors during the winter, and started a co-op gallery called Mainly Art inside Crossroads Mall. Renee Shaw and James “Dr. Torg” Torgerson have recently expanded the initial Mainly Art gallery space in the mall to a second, 5000 square foot space directly across from the original gallery. Upwards of 60 local artists and artisans (with more coming each day), participate in this co-operative effort.

One level down from the Mainly Art spaces is a beautiful gallery and frame shop called, “The Art Is In.” Clever play on words, and a cleverly utilized space. Firmly wedged between various clothing stores, it’s almost a relief to walk into such a serene atmosphere. Though the smell of Cinnabuns wafting by can make even the most disciplined shopper dizzy, seeing the art in this gallery is worth passing up on those extra calories. Be prepared to digest some tasty art at this savvy gallery.

Mark Weiler is the gallery owner, and a seasoned veteran of selling fine art in the mall. They show local artists, as well as artists from out of state. For Weiler, and his wife Heather, “in this particular mall, we draw a few more tourists, which tend to buy more artwork than locals, and 80 percent of our sales is to out-of-staters.” 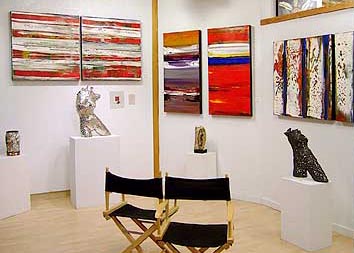 The last thing many people expect in a mall is a fine art gallery. “You expect poster shops, and that sort of thing so most people come in, and it’s a surprise to them. The mall likes us very much because we add to the mall experience, and people come in and see great artwork.” Weiler’s plans are up in the air regarding how long they will stay at Crossroads, as the mall will be undergoing major changes soon. “I’m not sure we would survive…away from the downtown tourist area”, Weiler says, adding that “there are a lot of really great artists here, but they don’t have a lot of venues in which to show their artwork.” Noting that the up and coming artists seem to have a more difficult time showing their work. Weiler says, “There is a greater need for more co-op type galleries, where the responsibility is shared for artists to get their work shown. As they get a name and their work gets better, then they can move up to bigger galleries.”