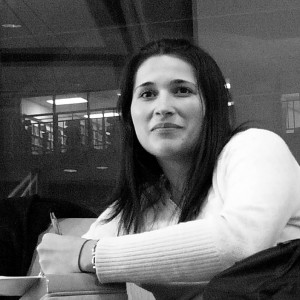 Today, 15 Bytes features Cedar City-based poet Natalie Young. Here she provides three poems, part of a larger series set in Utah with both fictional and non-fictional characters, including humans, aliens, and a monster who has lived in the Great Salt Lake for centuries. The setting is dystopian and, to a point, similar to modern day with the monster ruminating on past times.

So curl up with your favorite cup of joe and enjoy the work of Natalie!

in a red rock bowl. She recalls a time

at 13 when a stray attacked.

Commitment not an option. No way

to describe, to know how.

But its giant departure is clear.

are good reason to give up

an adopted dog after six days.

The look in the canine eyes:

body under a skiff of snow.

off, keeping things up.

All of this was once under water.

She is determined to see. Lock the creature in a still, share

his looks with those who’ll listen. She takes

a handful of diced tuna. Dabs the juice

from the tin can on her collar bone. The lake is saltier

than the sea, a pH between toothpaste and milk

or burn—all that can be done is grind

the small crystals into dirt and watch it lose

worth. This lesson she learned in Sunday school, the spiritual

point less poignant. Even salt will sift its way

to shore, the edges of his liquid home. One toe

at a time, she dribbles fish purée,

until she is up to her earlobes. Empty

housing a monster with nowhere else to go,

without a single outlet, it’s up to the earth’s inventions now.

Pretending to be interviewed, the monster gets choked up,

tells the cameraman to shut the damn thing off.

much from day to day, you see

the same things. What inspires you?

when they fly away.

Does that help generate new ideas?

I don’t have much use for such things.

You don’t wear clothing. How does that feel?

I guess you’re looking for “liberating,”

But how would I know?

It’s so quiet out here.

not a sudden silence.

If everything was brought back

at once…the noise, the movement

but could I still handle it?

You lived through a lot—more than most books

can claim. What keeps you

other than salt water; to step on dry ground;

someone to look and call

Natalie Young is a founding editor of the independent poetry magazine Sugar House Review, which just released its five-year anniversary issue. Her poetry has been published in magazines such as Rattle, Los Angeles Times, Green Mountains Review, Tampa Review, South Dakota Review, and others. She lives in Cedar City where she works as a graphic designer for an ad agency based out of Salt Lake City.