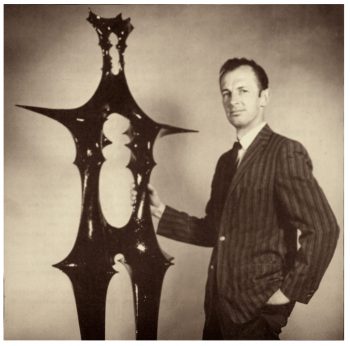 [dropcap]U[/dropcap]tah painter and sculptor Franz M. Johansen, who died Aug. 23 in Provo, found his artistic mission on an LDS church mission in the British Isles.

There, his wife Josie Morris confirms, he learned about William Blake, who as a boy said he had seen God through a window and then spent his life describing his religious beliefs in poetry. Johansen determined to spend his own life conveying his religious convictions through visual art. After a stint in the U.S. Army, he studied at BYU under B.F. Larsen, Roman Andrus and Glen Turner, graduating in 1955, joining the faculty the next year and continuing at the university, including some years as department chair, until 1989, when he retired early to pursue art exclusively.

He fell in love with all the arts in Europe, says son Nathan, “especially the masters, and he loved to look at not only the works but how they were made. By getting close to them he would look at brushstrokes and surface quality and application. So he learned that ‘someone created this.”’ An essential lesson, says his son, who went on to become a sculptor himself, though not of the figurative, religious work his father would have liked him to do. “That wasn’t me,” says Nathan Johansen. “I’ve been a practicing artist my whole career [and a successful one] and I have been able to work with my father. But my interest wasn’t following some of his interests.”

Nathan “grew up as a middle child in a family where Dad was doing art and I was totally intrigued with it. I have early memories of Dad creating things and me being aware that he was an artist. He encouraged me. As a young person, he let me help him a bit. As a teenager he put me to work. As an adult I was his employee but also a student and assistant, helping him outwit some of the larger projects. All through his career his students would be around — we were intermixed. I remember evenings I would tag along with him seeing student projects. I’ve been blessed to hear from many of Dad’s former students and they feel strongly about what they’ve learned from him.” 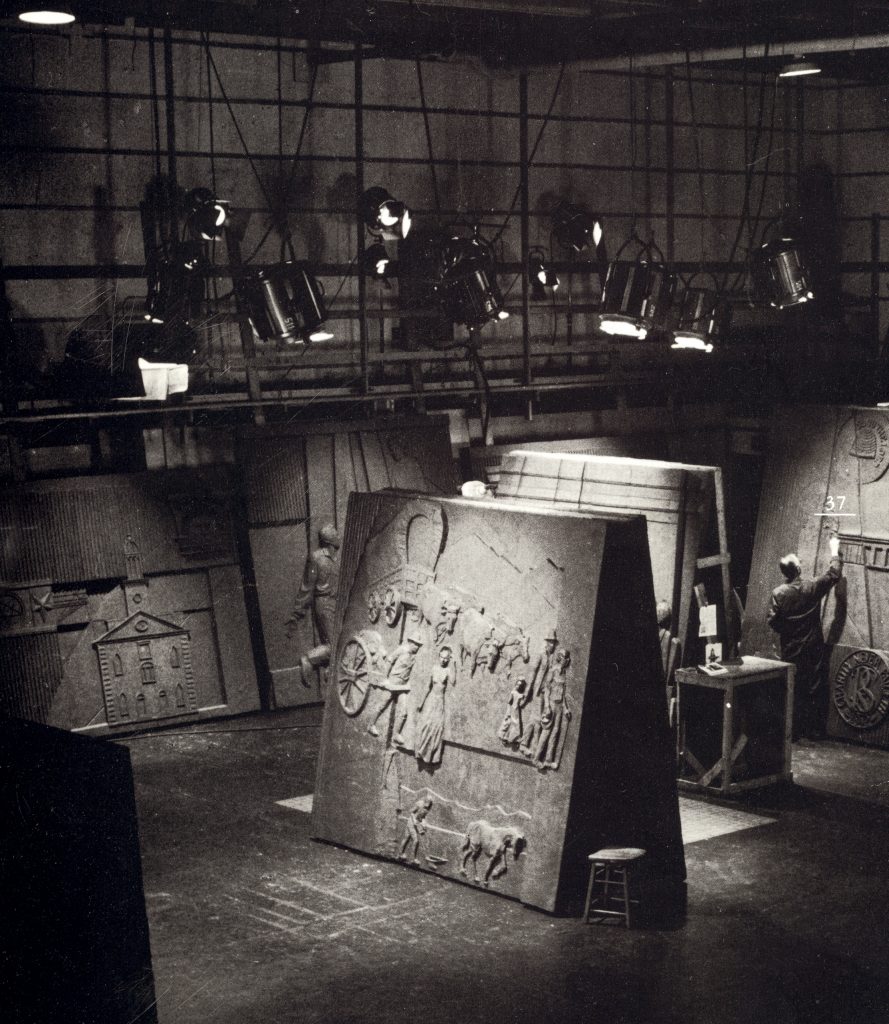 Franz Johansen in his studio.

Johansen has been called the founder of the LDS contemporary art movement that expresses spiritual relationships and belief through the human form, according to a BYU exhibition biography. Dennis Smith, who was part of the LDS Art & Belief movement (the subject of a film project by Nathan Florence) wrote to Nathan just the other day to say that his dad “was his most influential teacher.” Highland, Utah, painter and sculptor Gary Smith, another of the group, agrees wholeheartedly. Speaking over the phone from his native Oregon, pausing in the process of checking in at a motel there, he explained, “He was a teacher for many of us who came later. I took a lot of classes from him and he had a very forward–looking kind of experimental thinking and was interested in incorporating LDS influences into his work.” 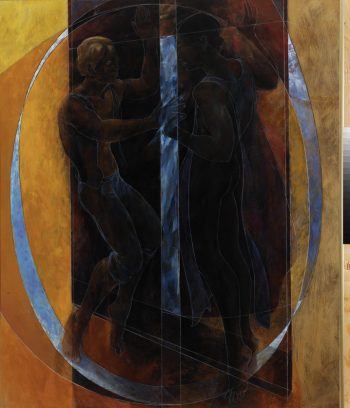 In “Veiled study” (one of a group of seven paintings), Johansen portrays in mostly monochromatic tones with metallic accents the Mormon idea of the veil that hangs between present mortality and the afterlife. The artwork, which received first place at the “Springville Museum of Art’s 20th Annual Spiritual and Religious Art in Utah” show “exemplifies most of Johansen’s work in that it is deeply spiritual and is rooted in LDS theology,” says an article in the museum’s library files. “With a single figure on each side of the veil, he presents the notion that those who have already passed to the other side are there to help those who are still in mortality, somewhat like guardian angels.”

Best known for his figurative relief sculptures in both stone and bronze, Johansen’s art is simultaneously representational and symbolic. Some of the artist’s better-known works include the bas-relief stone panels on the Harold B. Lee Library and the bronze relief on the Joseph Smith building at BYU, as well as the stone relief on the Church History Museum in Salt Lake City. His sculptures can be seen in the BYU Sculpture Garden, Springville Museum of Art, Church History Museum and LDS Conference Center and in locations across the country.

His figures aren’t always religious. Kevin Maag, owner of Metal Arts Foundry in Lehi where Johansen cast his bronze sculptures and son Nathan has worked for 30 years, says a favorite in his personal art collection is a sculpture of a dancer by Johansen. The foundry owner appreciated the way he worked as much as what he made. Johansen, he says, understood the casting side of art as well as the sculpting side. “He always sculpted with this in mind and it made our job for mold seams and structural issues much easier.” He recalls casting a large handcart company for the Mormon Trail Center in Winter Quarters (Nebraska) and needing a spot to attach anchoring. “Franz just said, ‘AHH, we will make a tuft of grass to cover the anchoring.’ He truly was a fun artist to cast for.” 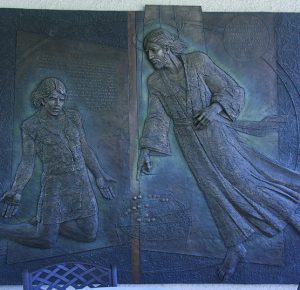 The Lord Manifests Himself to the Brother of Jared (2008), bronze 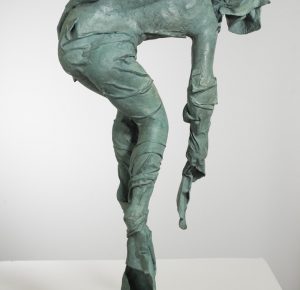 Situated in Equivocal Space (c.1985), oil on board 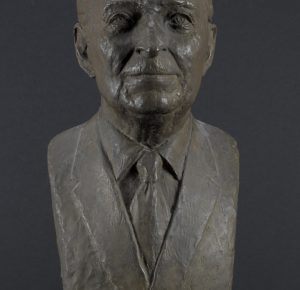 He was fun outside the studio as well. Gary Smith remembers going to Mexico in Franz’s car along with James Christensen in the middle of the night and running into what seemed like “a hurricane. We had to put up a tent in the rain and wind and when we woke up we were perched on a precipice, 2 feet away rom a 20-foot drop into the ocean. We moved down to the beach and went snorkeling . . . and I got seasick. They left me on a rock. Franz truly was an adventurer.”

He was that, Nathan’s wife, Betsy, agrees. “He took a sabbatical from BYU to Europe in a VW bus with six children under the age of 10 and a pregnant wife [Ruth, who died in 2001] who gave birth to a son in Paris. Oh, yes, he was definitely an adventurer.” 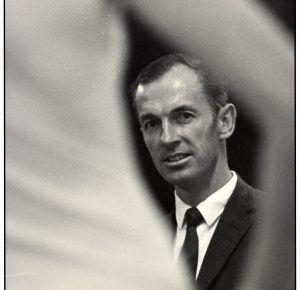 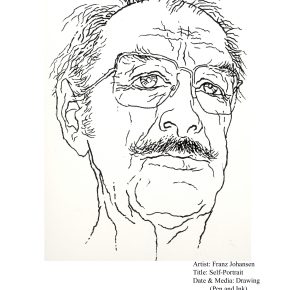 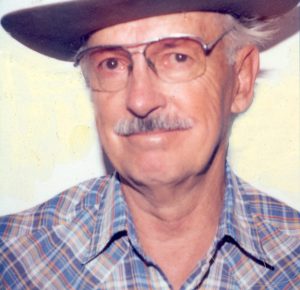