The Pure Object: An end and a beginning for Roland Thompson 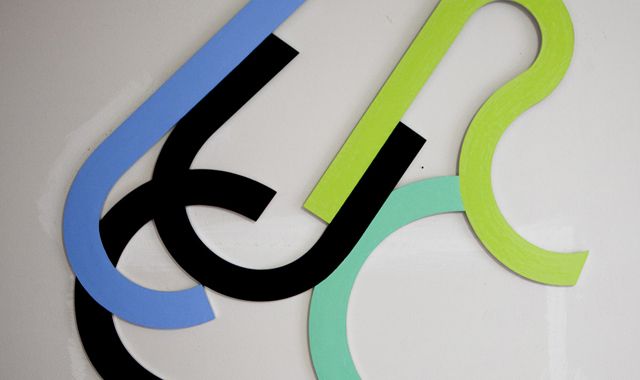 In his new work, Roland Thompson has gone to the core of his aims and has created pure objects. These pieces are interlocking lines of colored metal, with no other compositional elements. ï¿½The stripes are the format,” Thompson says. “There is no border, the structure is the format. In the other works the structure and the format cooperate, here I have gotten away from that.ï¿½ It is the end of a journey, for Thompson, and at the same time, a new beginning.

Thompson started painting when he was 13, and has been at it for nearly 30 years. From a young age, the structural and tactile qualities of works has always fascinated him. ï¿½I remember walking up to paintings and looking at how they were made,” he says. “I love every aspect of them. I didnï¿½t only look at the image but I looked at the brush stroke, the color; even when I was little I was looking at paintings more formally, I was looking at how a painting was made rather than only looking at the image. I looked at shape, color, thickness of the paint.ï¿½

That interest led to the development of his own work, non-objective pieces that concentrate on formal elements and highlight the structural possibilities of an artwork. Metal, his principal medium for the past twelve years, was key to the development of his personal style. “I realized I can make shaped canvases,” he says. “I was looking for ways to make shaped canvases, and metal is easy to work with, it’s stable, it doesn’t warp like wood does. I realized I could cut it into any shape I wanted and it would be stable.”” For Thompson, that ability to shape has become and absolute requirement for the kind of work he does.

To use the canvas itself to play a role in the aesthetics of the painting is a very Modernist strategy and some of Thompson’s most esteemed painter role-models were those who did just that: Frank Stella, Ellsworth Kelly and Bryce Marden. Rather than being an illusion of or referent to an outside reality, the painting becomes an autonomous entity, possessing its own objecthood. The idea of canvas functioning as art for art sake, says Thompson, “forces the viewer to experience the work as the object rather than the window. Presenting an object rather than a window to another reality.”

Roland’s objects have taken the form of the traditional square or rectangle (though, as they are without centers, subverted ones) as well as more complex, multi-sided polygons. The painted patterns within these can be dense and complicated, calling to mind the designs of intricate mandalas.

In other works geometry gives way to gesture, as Thompson’s sculpted painting surfaces describe loops and whorls. The commanding presence of a piece like “Daywalker,” which forms a rough figure eight, comes from the flowing line of the work itself as much as from any painting going on in the painting.|1| There is plenty of interior painting as well, swirls of dark red and then blue woven through by a mesh of lighter lines, giving the work its own, self-contained language. The painting is its own alpha and omega.

These works are not doors to meaning, but meaning itself. All evocation is literal and exacting, all inspiration is a reflection and not contrived but symbolically rendered through semiotic association, a reading of signifier and signified.

“I discover a lot while I am making [these paintings],” says Thompson. “I discover my artwork along the way. I have the sheet of metal, 5 x 8 feet, and a sheet of paper, 4x 6 inches, and I go after it. They are gradually refined and gradually discovered.”|2|

The works may require a similar slow process of discovery for the viewer. Thompson says his paintings are not paintings to be consumed at once, “but through a rate of gradual discovery.”

Referring to a piece like “All Worlds Come to Us,” a tilted half-circle-shaped aluminum sheet consisting of thousands of painted fragments, he says, “I want the piece to look machine made, but the same time I want it to look hand-painted, but for it to take a lot of perception to recognize this.”|3|

In his latest works Thompson pushes the emphasis on structure even further.|5| While earlier shapes were odd and non-traditional, they still served as a surface to be painted on. In the newest work, every swirl or line is itself an autonomous structure, a piece of a whole, locked or woven together to form an object. There is no frame, no surface, only components. In Thompson’s description, there is no “format,” only the line, as if floating in space. |6|

With pieces like “BW-T5” Thompson has brought his own work to a new level of objectivity, an exciting step for neo-Modernist abstraction.|7| Without “format” each object is its own pure structure of unadorned and unframed semiotics. Thinking of the works, prepositions like “of” and “on” (a painting “of” something, or painted “on” something) give way to the simple verb is.|8|

“BW-T5,” with its interconnecting lines, unique shape and distinctive pallet assumes its own objective identity without recourse for any kind of other relative “being.” Its autonomy is the kind of Modernist aesthetic that excludes the sort of conceptualism the contemporary viewer would feel tempted to ascribe to it; rather, it asserts its own pure ontological reality. The work’s color, line, and texture, its shape and interconnectivity reflect only the being of the object. Any kind of conceptual meaning only supports the objective reality of the piece as art for the pure sense of being.

With this progression, from shaped canvas to a canvas that is “pure structure,” Thompson creates works that are both lighter and airier in appearance, and yet weightier in accrued presence and composition. This is surely exciting territory for someone like Thompson, someone who has been interested in the physics of painting his whole life — he has achieved a level of purity that allows him to stake his own claim amongst the Modernists.

Roland Thompson’s work will be the subject of a solo exhibition at Gallery 468 in Provo beginning December 14 and continuing for a week. You can view more of the artist’s work at rolandthompson.info.