Robert Marshall: Having Found His Place

Art was the furthest thing from Marshall’s mind when he came to Provo as a freshman.  His plan was to graduate from college and become something important, like an engineer or an architect.  “That was my perception of what those who went to college did,” he explains. 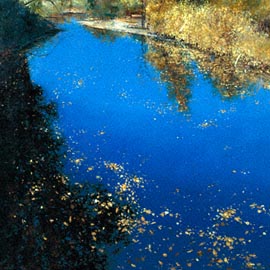 “My parents grew up during a hard time just following the depression.  My dad wanted his two sons to go to college and have a different life than he had.  Art was not a part of that vision because our life was never about art.”  Marshall’s father worked in construction and his job required a lot of travel and moving the family around. “We were gypsies living in a trailer house. One day my mom decided that the kids needed to stay in one place, so when I was in the sixth grade we settled in California.  After that we only moved five more times.”

When Marshall came to B.Y.U., he took math, science and language classes, but eventually decided he wanted to be an architect.  As a result, he took several art classes.  “I took a drawing class and a watercolor class and it was like walking out of a dark room and realizing that there were people who dealt with the arts and it was important.  I’d never been to a gallery or a museum.  I’d never seen a real painting or sculpture or anything so I had a lot of catching up to do.”

Those who are familiar with Robert Marshall’s work know him for his landscapes, but like most artists who went to school in the sixties, landscape was not the fashion.  “Abstract expressionists were still the big deal and pop artists were just coming on the scene.  Many artists try to be a number of painters, but hopefully figure out who they are in the process.  DeKooning and Rothko have always been favorites of mine and I was always connected to the way they manipulated their materials, but lurking back there was a closet landscape painter.  I just kept coming back to this need to have some type of pictorial, representational type of information.”

Marshall painted with watercolor almost exclusively for fifteen years when he first started his career.  Now he paints with oils as well, but he still thinks of himself as a watercolorist in many respects.   “Even when I told myself I needed to work with something besides watercolor for awhile, I would look at my large oil paintings and think they were just watercolors with gooier paint.  I still work from those amorphous, general shapes.  The oil paintings just give me a chance to work on a bigger scale.”

Even on a bigger scale, Marshall never paints panoramas.  He prefers close-ups of personal, private spots.  “I think, at best, my paintings are intimate areas you discover when you’re involving yourself with nature in a private way — those places you discover when you’re tromping around.  Hopefully by looking at them and seeing what happens with the patterns, abstract elements and shapes, it becomes bigger than that place and becomes a place that’s very important to you.” 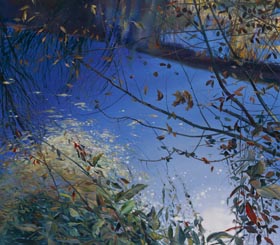 “I always felt the panoramic Grand Canyon or Timpanogos paintings refer so strongly to that place that it’s never your place – it’s everyone’s place. And that’s different from what I look for, which is a place so intimate and personal that you can’t identify its location. I don’t want you to be an observer of this place; I want you to be in the place.  I try to paint from a point of view that makes you feel like you’re levitating, being lifted into it rather than standing, just looking at it.”

Marshall recently finished fifteen paintings for an exhibit at B.Y.U.’s Museum of Art called, “Intersections: Recent Paintings by Six Utah Artists.”  The exhibit includes six artists, all of which are BYU professors.  “The show at BYU involved a lot of desert paintings of Snow Canyon [though] I have been painting water for ten years or so.  Something got me excited about those rock formations, which I probably painted the same way I paint water.  They’re very fluid.” 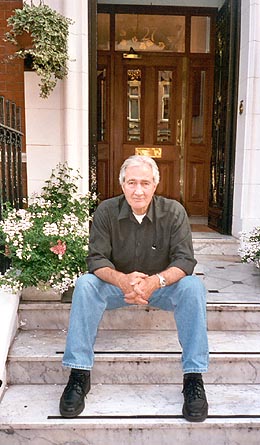 When looking at Marshall’s paintings, it is evident that water is an intriguing element for him.  He calls it magic. “You can see into it, under it, through it; things penetrate it, it reflects from above, it defines things yet it makes them ambiguous.  Even close up, water is pretty abstract.  It creates its own reality and maybe this comes from being a watercolorist, but I like how water lets me play visual games.”
Several years ago, Marshall suffered from an aneurysm. When asked if that life-changing event triggered a change or defined a new chapter in his career, he hesitated for a moment.  Even in retrospect, he has a difficult time marking individual phases.

“After I had that surgery and got a second chance at being around for a little while longer, I sent some new work to my Houston dealer and he called and said, ‘You need to get sick more often, these are the best things you’ve done.’ ”
“I couldn’t tell you how they were any different than the ones just previous to them.  If it’s something you impose on the work, it never has much substance, but if it comes as a natural consequence of something that has happened to you, that’s how it should happen. You’re a different person because something has happened to you and that will cause you to respond to things and maybe define and direct your work, but I don’t think I went looking through different eyes.  I give presentations and see slides of my work.  I know that I’m working the surface more and there’s more buildup in the paint, but I tend to paint through thematic concerns or involvements with certain things or concepts.”

In addition to preparing for the exhibit at B.Y.U., Marshall recently spent over a year working on murals for the Nauvoo temple as well as having a show in Arizona.  When you add a full-time teaching position at a university, it makes for one busy artistic career.

Marshall is currently in London directing the summer semester for B.Y.U. study abroad students and will remain four additional months to teach during the fall.  London has almost become a second home for Marshall, as this is his fifth time with the London study abroad program.  Because of this opportunity, he has been able to provide a much different upbringing for his children who have accompanied him and his wife during the semesters abroad.  While his dad took him to roller derbies and car shows, Marshall had the opportunity to take his children to world-class museums, theater performances and concerts.  All of his children manifest artistic talents whether they be visual or musical.

Although Marshall loves to travel, he loves being home as well. “There are a lot of good things about Utah, and you’re only one to three hours from flying to any major state in the U.S.  I love how so many artists stay in the state.  They like the life.  You don’t need to live in L.A. or New York.  For some, being in New York is really important, but I don’t think it’s the best thing for artists to do. I think it’s a good way to get swallowed up.  The artists I respect in the U.S. are living in some little town in South Dakota or something.  I’m not a recluse, but I like being able to get out of the city in fifteen minutes if I want.  For the past ten or fifteen years all I’ve had to do is go a mile up the canyon, find some private place and try and make a painting that’s bigger than life, rather than an important painting about an important place.” 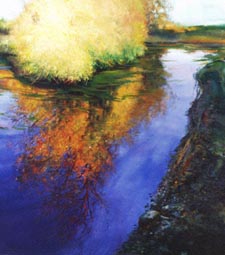 Beginning with his days as a quarterback and continuing on as a professor of art, Robert Marshall’s career at Brigham Young University proves to be a successful one. His football days ended a while ago, but his days as an artist will continue well beyond his career at the university. He looks forward to his future retirement when there is more time to relax, drive up the canyon to his magical places and take out his paintbrushes.