Our America: Latino Presence at the UMFA 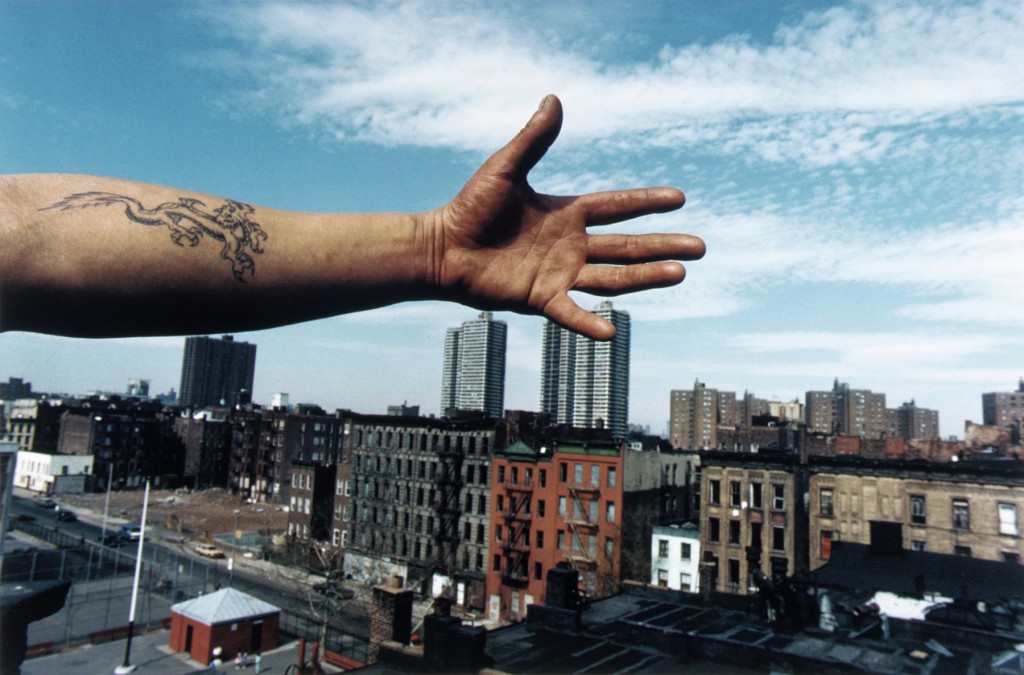 To consider oneself an American is to acknowledge an inherent lack of cultural homogeny. The nation is comprised of countless national ancestries, cultures, religions and customs. So much so that the traditional and hopeful “melting pot” metaphor has given way to the more realistic “tossed salad.” The Utah Museum of Fine Art’s new blockbuster exhibition Our America showcases a part of that salad, the enormous-and far too often overlooked-influence of Latino culture in American art.

Organized by curator E. Carmen Ramos, of the Smithsonian Museum of American Art, Our America is intimidating in its scale and ambition, tackling a number of important social, political and personal subjects as well as introducing viewers to a diverse spectrum of artists and mediums. The breadth of Latino-American artistic achievement is astonishing, especially considering the often-debilitating obstacles that impede cultural assimilation. Without a single theoretical lens to view the artworks, the show becomes a collection of perspectives divided into nine major themes. Premises such as immigration, exile, personal identity, and socio-political activism coalesce to form an impressive statement of how the past informs the present.

From the moment they enter the exhibition, visitors are confronted with an array of media. Displayed near the show’s entrance hangs a majestic blue canvas littered with the human and sensorial activity of an urban space. Carlos Almaraz’s “Night Magic” (1988) serves as a powerful autobiographical assessment, detailing the simultaneous exhilaration and isolation inherent to urban life. Akin to Picasso’s Blue Period, the work’s palette mimics the emotional turmoil of its subject. The painting’s bright colors and enigmatic figures dance around a lively canvas, yet underscore the tragic plight of the artist as a minority living with AIDS. 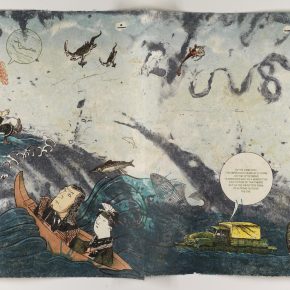 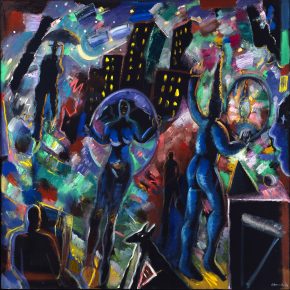 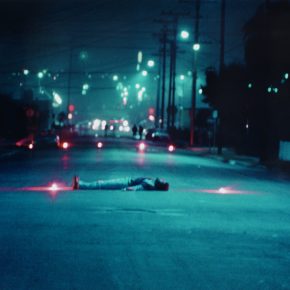 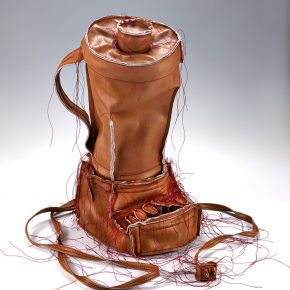 Adjacent to Almaraz’s painting, a number of other pieces similarly confront issues relating to street life and urban culture. What unites these photographs, paintings and installations is an investigation of how cultural identity is subsumed by and re-appropriated in the American landscape. The blending of two distinct cultures often occurs violently, while in other cases the hybridization of distinctive realms is far subtler. Various artists attest to this process, often using popular or commercial articles such as grocery stores and automobiles as symbols of Chicano (Mexican-American) culture.

In a category entitled “We Interrupt this Message,” viewers discover a most unusual Pop artwork. Created by Carlos Irizarry, “Biafra” (1970) is a screenprint in line with the stereotypical Pop art aesthetic. Bright colors and flashy silhouettes serve as borders around an African famine scene. Refashioned from a journalist’s photograph, “Biafra” critiques the media portrayal of current events and humanitarian plight, detailing the story of Nigerian forces using starvation as a weapon of force against the Biafran independence movement. This category is one of the exhibition’s most effective and engaging. Additionally, the work of the conceptual performance group Asco stands out among the exhibition’s many photographs. In “Á La Mode” (1976), members of Asco stand in glamorous postures, as if posing for a fashion magazine or an album cover. Their arrangement invokes Cindy Sherman’s Untitled Film Stills (1977-80) in a similar attempt to posture the artist’s bodily and visual authority. Whereas Sherman’s Film Stills exist as an assessment of the male dominated gaze, Asco’s image works to challenge the weight of pervasive Chicano stereotypes and shape their own image.

What unites many works in the exhibition is an effort to analyze the ways in which historical events have shaped the present. As one of the most visually striking pieces in the exhibition, Enrique Chagoya’s lithograph “Illegal Alien’s Guide to the Concept of Relative Surplus Value” is a long, horizontal scroll that, according to the didactic label, “resembles a pre-Columbian Mayan codex.” Chagoya’s use of amate paper gives the piece an antiquated look, as if viewers are gazing at a cultural artifact. While this materiality draws you in, closer inspection provokes a jarring effect. The work’s subject is a juxtaposition of historical images and comic book figures detailing in a visual chronology the tragic, yet fundamental moments of global conquest and cultural dominance. Despite the intensity of this active horizontal movement, viewers are reminded of the many cultures that have managed to survive unimaginable oppression.

Aside from the show’s careful attention to such critical issues as politics, culture and social inequality, the most important subject is everyday people. The Latino presence in American art cannot be recognized without paying tribute to the countless individuals who through their work, ambition and creativity gave a voice to their generation. Artworks that lend to personal narratives often hinge on the interrelatedness of identity and place. Antonio Martorell’s “La Playa Negra” (2010) is a sumptuous woodcut on Japanese paper, rich in its adherence to material. The subject of this print is a woman draped in fur, sitting upon a signature New York City rooftop. Skyscrapers and bridges litter the background while a sewing machine is placed directly next to the seated woman — a reference to the connection forged between identity and labor. An elaborate border frames the composition with an undeniable reference to Hokusai’s “Great Wave” (1829-32) running across the bottom of the print. This serves as homage to the time-honored tradition of Japanese printmaking and its eternal artistic relevance.

Another moving testament to the power of the individual is Margarita Cabrera’s series of vinyl sculptures, entitled Brown Blender, Black and Grey Toaster and White Coffee Maker (2011). These works showcase familiar appliances made in Mexican factories and sent to U.S. consumers. The functionality of each item is clearly visible, yet the sculptures droop from their own weight, recalling Claes Oldenburg’s famous ‘soft sculptures.’ What stands out is not just an emphasis on the material items of consumer culture, but the underlying aura imbued within them by the hands that create them. In addition to texture, Cabrera embellishes the individual threads that keep the item in place, fashioning them as long strands that go beyond their practical purpose. The loose strands of thread indicate the labor and attention paid to even the minutest elements of the item and remind us never to forget the sacrifice of those whose contributions to our way of life is enormous.

Our America reconciles what UMFA’s curator of modern and contemporary art Whitney Tassie calls “a part of American art history that hasn’t been told.” Viewers will no doubt be amazed by the enormity of artworks included in the exhibition, but can undoubtedly learn and become inspired by what they see. As the Western art historical canon makes attempts at assimilation, so too do the various educational institutions throughout the country such as the UMFA that hope to broaden their viewership. As Tassie adds, the museum has an obligation “to be relevant to the various demographics within our community.” Indeed Our America presents the museum with an enormous opportunity to engender an appreciation of and longing for different perspectives that likely will continue beyond this blockbuster exhibition.

Our America: The Latino Presence in American Art from the collection of the Smithsonian American Art Museum will be on view February 6-May 17, 2015. The Utah Museum of Fine Arts is located on the University of Utah’s campus in the Marcia and John Price Museum Building, 410 Campus Center Drive, Salt Lake City.