NEHMA Exhibit Broadens and Deepens our Appreciation for Women, Abstraction and Surrealism 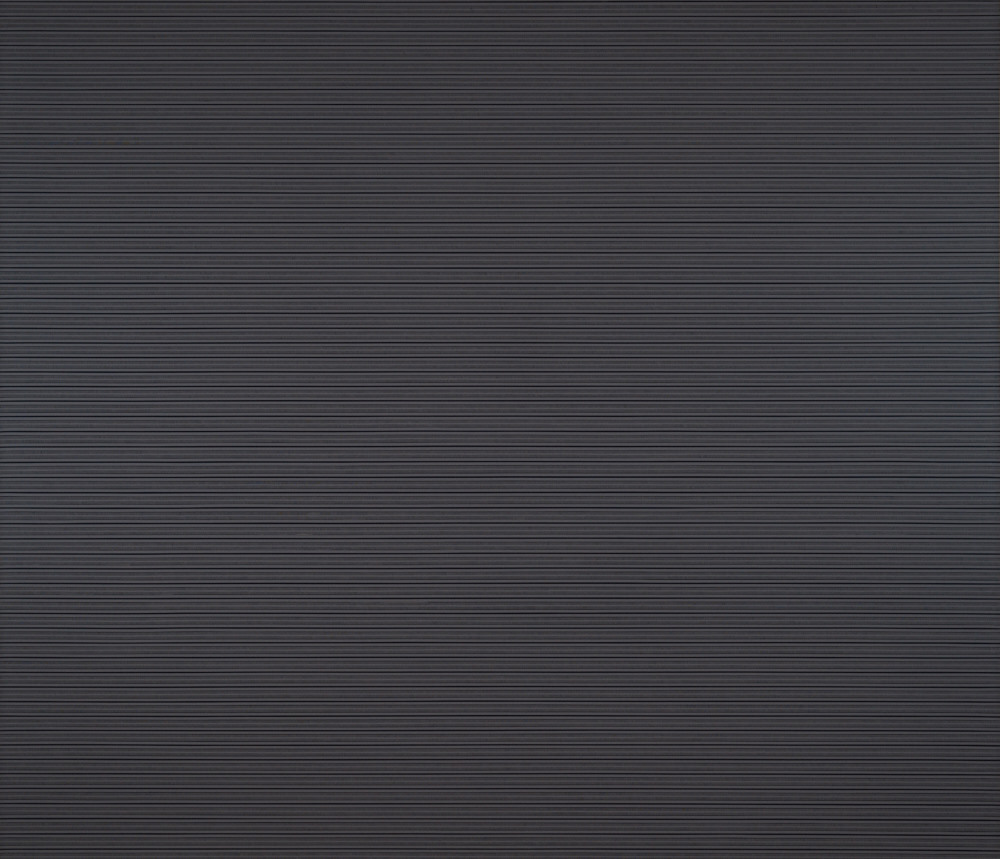 Set against a background of shades of gray, bright, vivid colors and shapes pop. Deep blue circles, squares filled with the colors of a warm red sunset, and sharp triangles fill the canvas. Maude I. Kerns’ “Composition #57” feels very reminiscent of works by Kandinsky. In contrast, on the opposite wall hangs Max Cole’s “Axias,” another abstract work but one that could not be more different from Kerns. “Axias” is large and looming. From a distance, it appears to be one large canvas filled with black paint, but upon closer inspection, a pattern of both solid black strips and strips made up of minuscule horizontal lines can be examined. The contrast between these works displays a common theme in the Nora Eccles Harrison Museum of Art’s Women, Surrealism, and Abstraction. The works in this exhibition, while all situated under the characteristics of Surrealism and abstraction, are diverse and unique in medium, style, and execution.

Women, Surrealism, and Abstraction spends a lot of time highlighting mediums of art that have not only been left out of discussions around Surrealism and abstraction but the history of art as a whole because they have been perceived as “low” art forms. Fiber arts, ceramics, and decorative arts are just a few examples, and all are art mediums that have traditionally been perceived as feminine. Joyce Kozloff is an artist who is passionate about breaking down this barrier between “high” and “low” art forms. She tends to focus her work on decorative and pattern arts/designs and her “Proposal for Prudential Lobby,” a 1986 work, features the design for a carpet. With various patterns and colors, the design is detailed and beautiful. Kozloff sought inspiration for the patterns used in this work from many ancient cultures including Egyptian, Assyrian, and Aegean art styles. Displayed next to Kozloff’s work is a piece by Lillian Elliott, known for her fiber works. Elliott’s work is a long woven wall hanging. Created from muted tan, red and green colors the piece, like Kozloff’s, features a symmetrical and eye-catching design. Kozloff and Elliott’s works stand together in harmony as they both disrupt traditional ideas about what fine art is and what can be defined as abstract. 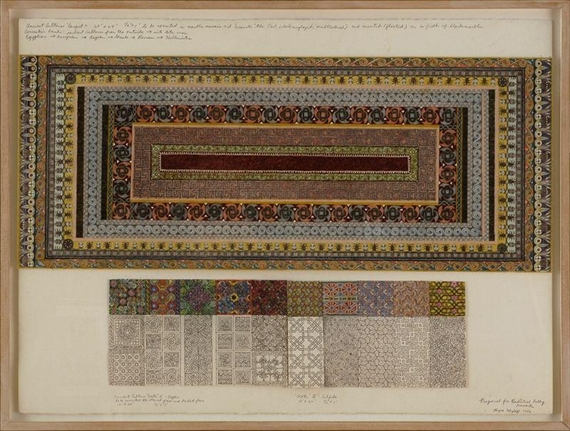 The show also highlights works from Native American women, striving to add the works of these women, who have been especially left out of abstract and Surrealist discussions, to the history of art. A circular, woven plaque created by Mary George feels similar to Elliott’s wall hanging as it utilizes the same muted earth tones but the pattern itself is somewhat different. George’s plaque features an oval shape of muted blue, red, green, and yellow rectangular sections. The oval is quite thin on the sides but grows thicker when it reaches the top and bottom center of the shape. The center is left in the natural tan wicker. The plaque is quite mesmerizing to look at as the different colors and crenelated outer edge of the oval make it feel as if it’s moving — shifting and spinning around in an endless cycle. A vase by Joy Navasie, a Hopi/Tewa woman, features some simplified human-like shapes with a geometric pattern wrapped around the top. The colors feel faint but add intrigue to the design that circles the vase. Navasie, who died in 2012, was well known for her beautiful white pottery, which she created from a technique she developed herself. Rachel Curley’s rug is hand-woven in a traditional Navajo style known as Two Grey Hills. The rug is done in muted tones and minimalist geometric patterns, and the exhibition contextualizes the work with the minimalist and geometric designs of Modernists like Cole and Anna Campbell Bliss. 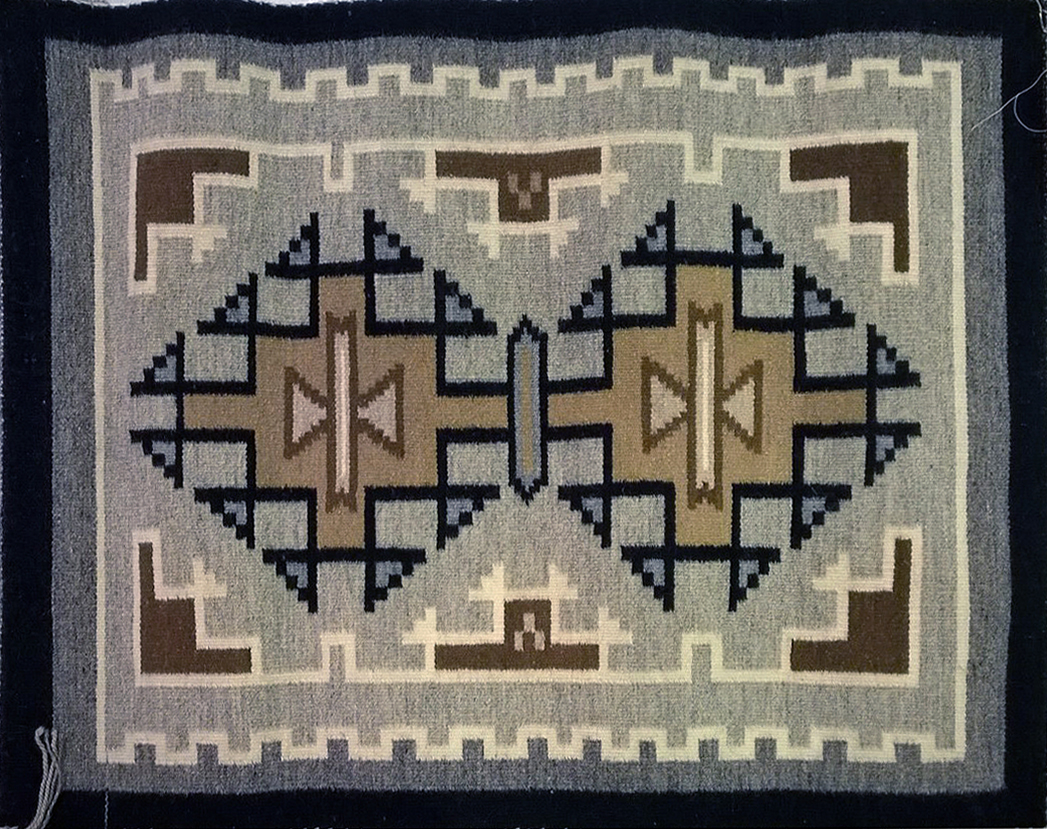 The diverse art mediums and unique execution of more common materials found in this show do not end with these beautiful fiber and ceramic works but are expanded upon by  several sculptural artists Suzanne Klotz’ work, titled “Dressing Table,” features a classic wood dressing table with a sturdy chair and a triptych mirror. Unlike a classic dressing table, Klotz has painted and added ceramic pieces to the table and frames around the mirrors and chair. Each piece of the set is covered in muted purple flowers, with small white daisies scattered over the surface. Green foliage is included in two different shades, one an olive green the other a kind of yellow-green, reminiscent of dead plants. The floral design covers every inch of the dressing table, it is detailed and from a distance feels welcoming but once one draws closer to the work the disturbing ceramic pieces become clear. The arched wooden top above the center mirror has antlers attached to it; but where one might expect to see the head of a deer is an eel-like face with sharp teeth, open mouth, ready to eat its prey. Around this head, serpent-like bodies weave in and out of holes in the wood. Casting the eyes just below this, one is met by more serpent-like creatures hanging down in front of the center mirror, these creatures also have sharp teeth and open mouths. They wriggle and squirm as if trying to free themselves from the pieces of rope that keep them fixed to the wooden frame. A small jar of flowers is placed on the table as well as if in an attempt to distract from the unearthly creatures, which have infested the table. The work’s mix between monstrous wriggling creatures and delicate, beautiful flowers is both unsettling and hard to look away from. 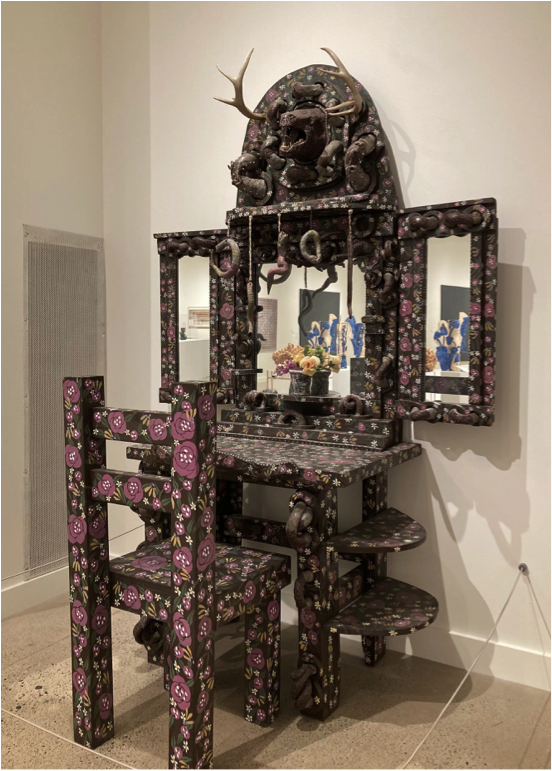 Sarah Perry’s “Pull of the Moon” also walks the line between the beautiful and the unsettling. Perry’s works are often made of abandoned objects she finds in nature which she resurrects when she makes them part of her artworks. “Pull of the Moon” is a beautifully delicate spiral staircase, which twists around an open column. What makes “Pull of the Moon” both unique and unsettling is the material it’s made from; small animal bones. The bones’ brilliant white color and their structure, particularly the column, almost looks like lace. The work looks so delicate that it feels as though a slight breeze would knock down the entire structure, and yet it stands tall and lasting upon a pile of bones. These bones, both a symbol of life and death, reach upwards creating a hauntingly beautiful staircase, which stretches to the heavens.

Lydia Benglis’s small ceramic piece may feel similar to many other abstract sculptures. The work’s odd curving and intertwining sections feel very familiar but the context of how it was made makes this work brilliant. Benglis was initially inspired by the works of Jackson Pollock and his well-known technique of dripping paint onto his canvases. Intrigued, Benglis began to apply this technique to her own works but instead of using paint and canvas decided she would create three-dimensional works using latex, plastic, foam, and wax. While lacking in color, Benglis’s piece is vibrant in the way it glides and moves on top of the pedestal. Benglis’ technique took Pollock’s and turned it into something new, intriguing and just as unique as its original form.

With such a wide range of mediums and styles NEHMA’s Women, Surrealism, and Abstraction keeps its viewers on their toes. Though the road is long to reaching equality in the arts, museums’ willingness to self-analysis and observe bad habits in their own institutions is a step in the right direction. Just like the artists, the works displayed here are vibrant, intriguing, and deserving of further discussion and inclusion in the history of art.

Women, Surrealism, and Abstraction, Nora Eccles Harrison Museum of Art, Logan, through May 7, 2022.