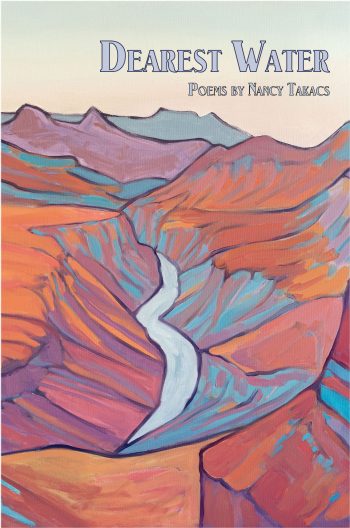 Nancy Takacs’ fourth full-length poetry collection, Dearest Water (Mayapple Press 2022, 77pp.) continues the poet’s journey toward the spiritual center of wilderness, whether encountered out-of-doors (on a desert clifftop, say, or under a star-studded Western night sky) or glimpsed interiorly, after an argument with a beloved husband or while shopping for remnants in a Manhattan garment district of distant memory. Though less abstract than the poems in Takacs’ also recommended previous collection, The Worrier (University of Massachusetts Press, 2016), each poem in Dearest Water interrogates its subject matter to create pathways from a sensory surface into a deeper world, and in so doing, invites the reader’s self-examination while sometimes also exposing a painful contradiction previously held close in the writer’s personal history.

The collection is divided into four sections, each one loosely organized around a theme of “Poems for Women Only,” “Wildness,” “Invisible Jewels” and finally, “Notes to God from County Road H.”

The first section constitutes an homage to Tony Hoagland’s 1986 “Poem For Men Only,” a meditation on his father’s decline and incapacitation, one of many in which the late poet lamented the essential human weakness of men, “brief/as birds…at evening, forced to reenter the collective shade/and shrink, remembering their size.” But if Hoagland’s men are sparrows, Nancy’s women are hummingbirds, “flutter[ing] in the honeysuckle/trailing our green wings behind us” (“Poem for Women Only”), or practical bees that “sculpt hexagons/the most efficient shapes/to harbor their labor…how easily they accept dying” (“The Beekeeper”). Taken as a whole, this section celebrates the interior, domestic side of women’s lives, their strength, resilience and sensuality. After a glass topped table is shattered by lightning, Takacs writes,

It was then we invented

sprang it open near lakes

where we swam the butterfly

to the deep, and back a couple of times[,]

under the tang of pines.

But Takacs’ women aren’t all business. “Remnants,” recounting a ’50s-era fabric shopping trip between an unmarried aunt and her niece, celebrates sensuality, as the two become “loose with pleasure/as our palms felt the prickles/of weave, our wrists the feather/of selvage.” Yet another voice, a bit wary, emanates from “Making Up,” in which a husband and wife hold hands after an “argument that shimmered with hooves./Now his voice is all hallowed and velour./Now my voice is hazy and mango.”

In the second section, called “Wildness,” the human observer shrinks before imagery from the Utah and northern Wisconsin wildernesses, described sometimes intimately and sometimes from an alienated distance — through a window, across years of memory. “Dearest Water,” the book’s 2020 Pushcart-Prize-winning title poem, found in this section, places us in a desert landscape, looking down from the top of Dead Horse Point, as wild horses once did before plunging to their deaths at the sight of water at the canyon bottom. It’s a poem of longing, of the aging poet’s thirst “for the lost,” as well as a love poem for Earth’s most abundant atom.

Following “Dearest Water,” the brilliantly imagistic “Why I Became Black Dragon Canyon” brooks no distance between the human voice, listing answers to the title’s implicit question, and the subject canyon: “I wanted to be carved out of aimlessness,” Takacs sings. “I needed paintbrush and mallow/to whisk up through my toes…I needed that juniper to brush me.” Again in “The Garden State,” a silk hydrangea blossom on the poet’s desk takes her back to a dreamy, nature-infused childhood, “to our garden’s snowballs/I’d get lost under for a long time,/their hide-and-seek lushness and quiet fragrance,/their trove of insects I would cup and touch…”

But this section’s title poem “Wildness” brings a second human face, that of Emily Dickinson, and distinctly more distance, into the equation. Sitting at a taco stand, writing “on the backs of old receipts/ from my purse,” the poet studies “the only photo known to be you.” “Emily,” Takacs writes, “I wish my Monday/was a little like yours,/stopping at Sue’s/with a coconut cake/for some gossip/and a sneak of brandy,//not searching to find the counter/for anti-aging cream…” The score seems almost tied between speaker and subject in this poem — though Emily enviably “never wore/a skirt that had to be dry-cleaned,” she was dead by the time “friends/carried [her] coffin lightly/through a field of buttercups…” Still, the poet seems to envy Dickinson’s freedom and privacy, her imagined ability to “open the door,/ close the door, refuse visitors,/ and keep to my hand-written poems.”

“Invisible Jewels,” the book’s third section, harks back to the first with poems mostly human-sized and “homely,” in the British sense of comfortable and cozy. No longer the literal amethysts, peridot or garnet of earlier poems, the “invisible jewels” of this section are the tasty contents of the cellar of a (female) God, presumably stored for winter along with “hydrangea, still blue,” cilantro, dill and other fruits of the summer garden (“God, in the Garden”). In “What Does the Day Say?,” we consider, from daylight’s point of view, myriad ways of spending time, from solitary hiking in Humbug Canyon, in the San Rafael Swell, to joining a protest march against climate change.

The collection ends with a pair of longer poems linked by images taken from Southwestern United States petroglyphs, carved into canyon “varnish” by bygone peoples, in the shapes of antlered animals, snakes, and figures a friend of the poet once compared to aliens, and by a quiet confidence that humans need not search for so-called miracles to be held in awe. “There is nothing more miraculous/than evolution right before/our eyes…,” Takacs sings in “Drought,” effortlessly skirting the question of whether or not to ascribe desert scenery, or drought for that matter, to the named “God” of the section title. Beholding “the curve/of a dog’s paw,…its descending/blossom,” or the body of a dead bear whose darkness “makes me think of life/where there were no stars,” the poet finally gives in to the urge it seems she has felt throughout the collection, to ask questions to which no answers exist, questions she gifts to readers to take forward as our own. “Aren’t we/moving towards happiness/always, moving aside//the shells and the orange peels,/the tin cans and chamomile,//moving aside the bills/we have torn, and finally/paid up?”

May every reader’s answer, like my own, be yes.

Patricia McMillen is a retired lawyer, writer, folk musician and community activist. Prior to reviewing Nancy Takacs’ Dearest Water, her previous flirtations with the state of Utah were attending Sundance Film Festival (virtually, earlier this year; live, before that); sliding (tumbling?) down snow-covered mountains in beautiful Alta/Little Cottonwood Canyon; and climbing the Kaiparowits Plateau in 1991 with Four Corners School of Outdoor Education and half a dozen mules. Mostly, however, she’s a flatlander who lives and writes (poetry, biography, dramaturgy) in Chicago’s Little Italy neighborhood, former home of beloved statues of Joe DiMaggio and Cristoforo Colombo.