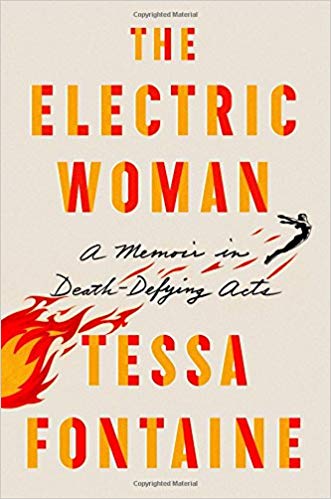 Come inside Tessa Fontaine’s The Electric Woman and you’ll travel through a hall of mirrors. You’ll watch a young woman incorporate the timeless dramas of grief in a sideshow tent, reflecting richer gestures of love and loss in the distant center ring. You’ll see our narrator undone by the sight of her mother’s bleeding brain, gleaming beneath a crescent of cutaway skull. You’ll see the mother levitate between life and death, here and not here, unloved and utterly beloved, as her daughter flees to strut and fret upon the carnival stage.

The show has plenty to offer. It’s a “don’t try this at home” tutorial on ageless pantomimes of endurance. You’ll learn how to eat fire, to set your arms aflame, to pass the heat from hand to hand. You’ll take in the concept of swallowing swords. You’ll see women contort themselves from box to box, share legs, trade their heads for metal posts. You’ll watch them hold very still as burly men throw knives. You’ll feel the tightening squeeze of a boa constrictor. You’ll reach to touch bodies singed, cut, scarred and tattooed, bitten and beaten.

True to its carnival nature, the narrative both reveals and obscures its compartmentalized mysteries. You’ll stand in the forbidden “carnie” world, as promised, but mostly it will guard its medieval secrets. You’ll meet fathers practiced in the magic of never being where their children are, even as they wave photographs of little daughters like talismans. You’ll witness the brutally hard work of people who live outside of “regular” time, beginning and ending their repetitious days by the motion of the Ferris wheel. You’ll sense the ghostly flutter of heartland American family values threading through a map of muscle and sweat and exile: carnies who lift and secure small children on the rides by day, circle in to beat a fellow to death by starlight. You’ll trust the voice of a narrator who leans in closer than most of us will — maybe because we know she must return and report, anthropologist of the arcane.

You’ll realize that before she can comprehend her own motives, this ravaged daughter insists on transposing her fear onto a neat calendar of ritual endurance. You’ll see her body learn to incorporate guilt and fear by rehearsing them in increments, iterating the physical until it becomes the existential — act by repetitive act, day by stifling day, night by cramped and sleepless night in a narrow semitrailer bunk. One hundred and fifty days of enacting small scripts of pain will teach her to contain the intimate devastations of her mother’s mortality: blood, brain fluid, urine, shit, organ, organism. She will hearken toward the enigma of the maternal body. She will concede the futility of imagining we can know the people we love.

Tessa “Tex” Fontaine will stand with us as she raises the curtain on the rarest spectacle of all: a man who gets on with loving his wife, and a wordless wife who takes it in as if love were sunlight and meadow grass. You’ll stand agape at his bona fide death-defying scheme to take a damaged, yet utterly whole, woman across a continent and ocean. You’ll long to stand near as the beloved wife opens her eyes in wonder, as he pushes her wheelchair toward a site of deeply personal memory. Likely you’ll gulp the whole thing in, as the real attraction requires. You won’t ask how he got the money, you won’t question the logistics, you won’t solicit a backstage reveal on what it takes to transport 250 pounds of luggage and medical equipment by rail and ship and taxi — to Italy, and home again to a wary wayward daughter.

And, bonus: you’ll emerge with a whole new vocabulary! “Bally girl.” “Yeller.” “Marks” and “dings.” You’ll feel a bit like you’ve just jumped off a trapeze after riding out the dizzying temporal swings — present to past to present to further past, further present, a bit of future, present. You’ll walk onward to new attractions with peculiar questions, some specific and trivial, some grander and more cosmic.

The Electric Woman plays carnival as rich metaphor, yes, and it stays faithful to the conceit. But finally more striking is Fontaine’s portrayal of mortality as inescapably opaque. Every surface signals yet obscures another depth. We’re here on the stage with our intrepid guide, but somehow the show is always somewhere else. Mostly, the book sustains itself and its readers on this hard truth, holding to the stark requirements of a very good memoir. Ultimately a genre of the unresolvable, memoir traces the contours of bottomless gap. It plays against surfaces, mirrors the indefinite. As character, Tessa Fontaine cannot face her own mysteries. As narrator, as rememberer, she teaches herself to hold them like a handful of flames, beckoning us as she tilts each spectacle toward a glimpse of the spectacular.

Pay up and go on in. Tarry about. Peek through.

“Do you think you can be hypnotized by a snake?” I ask the boy. He shakes his head and walks a little closer. “Many people believed snakes have the power to hypnotize, so come close and look right into Pandora’s eyes,” I say, which is my cue to guide the strong, heavy snake’s head out toward the willing participant so he or she might gaze into the pools of her eyes, but when I start to pull her head, she won’t budge. I try again, gently still, smiling at the boy who is waiting to prove me wrong. The little boy has a bright red shirt a few sizes too big, and buzzed blond hair, and I can see his teeny rounded teeth inside his open expectant lick-lipped mouth as he looks from snake body to my face to see what the damn holdup is.

Which is an excellent question. What the hell is happening?

I pull at her neck, trying new angles, grabbing different sections of her thick body to extract her, and each time I do she does not slide any farther out, but I can feel a hard pull on my hair. She’s stuck in there. Tangled deep, deep into my sweaty, curling-ironed hair.

The little boy is still staring up at me with a slack jaw.

“Can I see the snake?” he finally asks, as if that weren’t clear.

Raised outside San Francisco, Tessa Fontaine got her MFA from the University of Alabama and is currently a doctoral student in creative writing at the University of Utah. She spent the 2013 season performing with the last American traveling circus sideshow, the World of Wonders.

Karin Anderson teaches English at Utah Valley University. Her novel Before Us Like a Land of Dreams is forthcoming in May 2019 from Torrey House Press. You can read an interview of Anderson here.