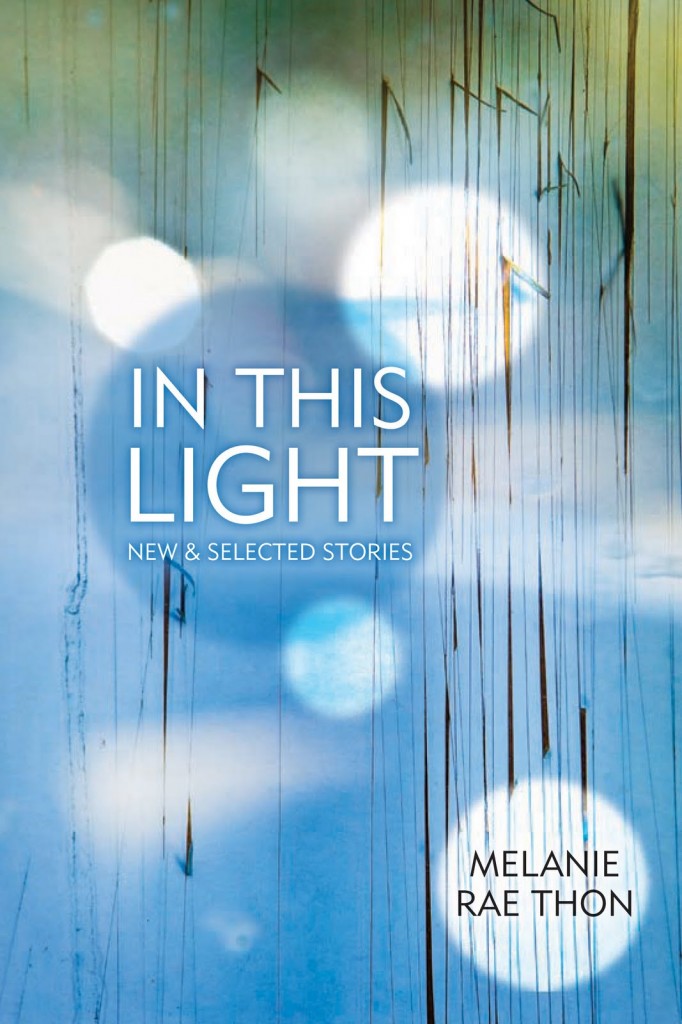 In This Light, University of Utah English Professor and award-winning author Melanie Rae Thon’s most recent story collection, brings together works from a quarter century of her writing, thus becoming in effect a cross section of her artistic development. It begins with two of her early stories, which are accessible if almost too transparently structured. Four from her second collection show her in transition toward what emerges in three recent stories. Here the expository clarity of her early work disappears beneath what may strike readers as either an encompassing, spiritual vision, or an awesome rush of discursive language meant to conceal the impossibility of finding comfort in this world.

The opening story, “Iona Moon,” presents the author at her most accessible. Taking place during a few weeks either side of the end of high school—as nearly universal a transition as exists today—it follows the title character as she moves between two boys: the lying one who beds (or back seats) her before he abandons her, and the honest one who refuses to do either. Like all Thon’s stories, it’s rich in details of period and locale. From her mother Hannah, Iona has learned to treasure a farmer’s pre-dawn tasks, done ‘In the lightless peace God made before he made the day.’ Willy objects that her soiled shoes make his car smell like a barnyard, but then Willy has already learned to accept what he cannot change. His father, named after Andrew Johnson, the president who gave up what Abraham Lincoln had sacrificed so much for, wanted to be an attorney, but became a dentist out of necessity: one who argues like a lawyer, augmented by Biblical blacks and whites. Willy’s mother trained as a cosmetologist, but in tiny, claustrophobic White Falls also works for the undertaker, salvaging the ruined beauty of teenage children killed by the cars they thought would liberate them. Only Jay, the wealthy boy and so the least worthy of the three, may escape the slow death of high school aspirations. But if he is blessed by circumstances, we can be certain he will waste this advantage. All this is less schematic than it sounds, but by the end, Iona has glimpsed how the dignity of the tasks she cherishes will turn to unwelcome drudgery once the pattern sets and there are no more options. In a story full of rich language, one line is repeated: Hannah’s ‘I think I’ve got to have some pleasure,’ comes back to Iona, an apparition that threatens to break her heart.

From the beginning, Thon has avoided the narrow story, so like an obstacle course, in which the hero threads a narrative path among colorful characters, letting behavior reveal what it can about them. Instead, she tells us what we need to know, in stories that are intricately woven, dense with tangential inferences, like sparks that fly off to shed brief, revealing light on each person or predicament. Perhaps their foremost quality is resonance: the sympathetic vibration of one thing to another within the story, and beyond it, between them and us. From story to story, the number and richness of these centrifugal glimpses increases, gradually compressing events at the core beneath a mantle of emotional and spiritual significance, until in “Tu B’Shvat,” the apotheosis-like concluding story, a single event—the unexplained death by drowning of a young woman at a community exercise pool in Salt Lake City—becomes the catalyst that illuminates not only the dead woman’s family and her connection to the Holocaust, but the penetration, by hers and the narrator’s families, of a new world that continues to challenge and, ultimately, exalt them. Revelations tumble forth. Thon foregrounds two types of humanity: the mass of worthy, yet disenfranchised figures who suffer, and the sensitive few who come alive in the act of perceiving the inner lives of the voiceless, extending those lives by acts of memory. Eventually, the difference between remembering the dead and keeping them alive is lost, and what matters becomes a mystical property that moves between bodies like the breath they share, like the shadow of one falling on another.

Readers content to read modern stories written in the confident manner of Jane Austen or Mark Twain may want to stop reading now. Or we could talk about subjective, technical flaws not everyone objects to. Thon recounts dreams, a device never all that convincing, but one further discredited in the age of Cognitive Science. If she doesn’t actually use the second person, she comes close in her characters’ tendency to address the reader. She sometimes stretches her faith that aesthetics can justify even the most wasted life, until the surface of the story becomes translucent, her implied lessons showing through like the silhouette behind a screen. Her enthusiasts might counter that such cavils pale beside the sure-footed way Thon navigates stories far beyond her experience, transporting readers into the presence of, and even inside, strange beings who turn out to be more like us than seemed possible. Those who enjoy stories that spell out moral truths will appreciate “Punishment,” set before the civil war though told long after, in which Selina is saved from what befell her Irish maid—becoming her widowed father’s concubine—when Selina’s father chooses one of his slaves instead. Selina’s subsequently blighted life can be seen as the price of her deliverance, symbolic of the impact of sin on slave and master alike.

These are traditionally-structured stories of characters and the incidents that befall them. Beneath lie vast swaths of research. Write what you know was supposed to be the writer%