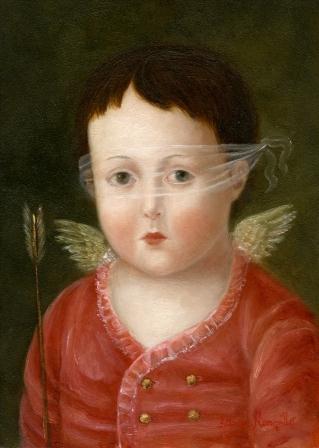 Cupid With Mask by Fatima Ronquillo

As a child, I was often accused of wool-gathering. Years later, I not only witnessed my daughter day-dreaming, but listened to her describe her waking visions to me as she watched them. Today’s media-inundated child may say she watches videos in her head. As we age, our ability to make things up usually pales, and we turn to talented exceptions to do our dreaming for us. Those who best retain the skills of imagination become playwrights, directors, actors, and so forth. In order to make their dreams visible to others, they are given access to the materials of artifice: costumes, sets, props. Some become entertainers, and the most successful are rewarded with wealth and celebrity. Others become artists.

Rarely is the connection between everyday imagining and art making so clearly demonstrated as in the paintings of Fatima Ronquillo. This probably has to do with her having been an adolescent when her family left the Philippines, where she was born, and brought her to the United States. A child uprooted at this emotionally critical age may become the kind of artist who creates a whole world for herself. Artistically, Fatima is the affectionate descendent of the great Fernando Botero, whose ‘volumetric’ figures achieve thereby a surprisingly universal character, against which his meticulously rendered, meaningful details create vivid social commentary. Another relative, perhaps a distant cousin, is Utah’s Brian Kershisnik. Both revel in projecting the inner life of their ‘characters’ onto a theatrical stage. Kershisnik imagines the life of the spirit, set in the home or in heaven; Fatima imagines a romance, replete with traditional symbols: arrows, bleeding wounds, hand-written notes, and in two recent series, ornaments depicting the Eye of the Beloved and, conversely, blindfolds.

Most Fatima Ronquillos are small: tiny, even. At the gallery, Susan Meyer often sets them on a table or desk, the way Isabella Stewart Gardner kept her Vermeer. In them one usually sees the principal figure close to the front of the painted space, as we might see ourselves reflected in a mirror, usually turned just slightly away from straight on, while the dramatic setting stretches into the distance. Gardens and paths are common. The subject will be young and usually in costume. Youth may suggest imagination, the child’s ernest work of playing at being a grownup. But it also conveys a sense of just beginning. In spite of the signs of suffering and hints of mortality, in truth these tales, like their protagonists, are yet young, still as full of potential as they are of excitement and risk. Every bit as important as the subject and the costume are the various symbolic objects, often reminiscent of those carried by, or accompanying, saints in holy pictures that are provided to the faithful as aids to contemplating and imagining their lives and passions. Too often, we appreciate the aesthetics of paintings without considering our ignorance of what they depict. Fatima Ronquillo invites us to make up those stories for ourselves.