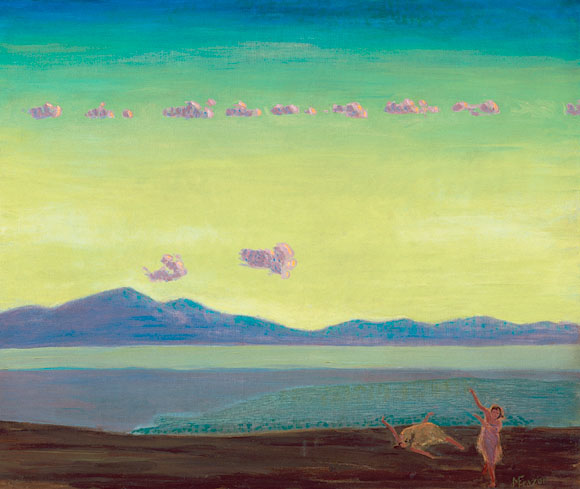 Last month, I introduced you to A.B. Wright, the first of many “Block” artists, that is, a number of early Utah artists who gravitated to each other in the areas of the Avenues of Salt Lake, as well as locales close to the University of Utah. I have been fascinated with Mabel Pearl Frazer (1887-1981), another artist of the area, ever since my mom told me once that she took an art class from her at the U. “Mabel Frazer,” she said, “was an accomplished artist and teacher, but was quite eccentric. She slept in a piano.” I’ve done some unusual things in my lifetime but sleeping in a piano has never been one of them. I needed to learn more than the brief descriptions given Mabel in the Utah art books. I have long admired this early Utah artist, not because of the piano story, but because of her early insight into modernism in conservative Utah.

My artist/art historian sister, Julie, confirmed that she had also studied art from Frazer with her good friend, Marilyn Conover Barker, artist and author of The Legacy of Mormon Furniture. Julie and I met with Marilyn and her accomplished and high-profile husband, Des, recently to discuss Frazer, her art and story. Frazer, born in West Jordan but raised in Beaver, Utah, studied art at the U and at the prestigious Art Students League in New York. Her teaching career at the University of Utah began in 1921 and lasted 32 years until she retired in 1953 as associate professor, having for decades been passed over for that position until three years before her retirement.

Frazer had a stern look about her most of the time. She wore clothes that resembled a housedress with sturdy shoes, remembers Marilyn. “She was very nice and very fair. She could be seen driving her Model A Ford sedan, which was recognizable because of its color—brindle. It was ugly!” shared Des. Brindle is a darkish yellow-brown, hardly a color one would associate with a modernist painter. She kept this car all her life and frequently stopped in for gas on 13th East and 2nd South where Des worked while a student at the U. A brightly-lit Tesoro gas and convenience store now stands on the site. Her powerful car allowed her to venture out into the wilds with her friends where she would sketch and paint. Further, because of the high clearance of the Model A, Frazer was able to sleep under the car, avoiding the use of a tent (I prefer drifting off to sleep, gazing at the stars rather than a Meineke!). Marilyn noted that she wishes that she had had as much courage as did Frazer to drive to remote areas and paint. 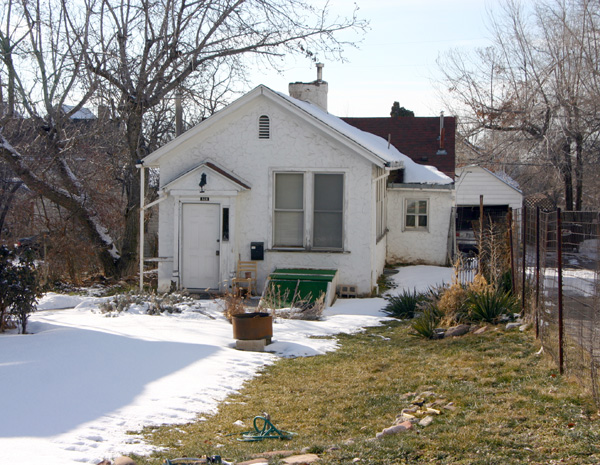 Frazer remained a spinster all of her life. Her father, Thomas, an accomplished stonemason who constructed a number of volcanic-stone houses in Beaver, built a small dwelling adjacent to his own Salt Lake City home for Frazer. The extant cottage is located on the west side of University Street, between 3rd and 4th South. Her living space was very limited, particularly because she filled her house with paintings, murals and easels. Included were a kitchenette and a small bedroom while the front yard served as a vegetable garden. Perhaps because she was frugal, “not weird” according to Marilyn, she came upon an old piano, the rectangular type similar to those of the mid-19th century. Many of the strings and keys were missing, but the piano itself was a piece of furniture that fit into her décor. Because of space limitations and too many paintings in her bedroom, Frazer fitted a twin-sized mattress in the piano and used it as her primary place for slumber. I asked the Barkers if she had taken the legs off of it, and they remarked that she kept the piano as it was on the high legs. “In fact,” said Marilyn, “every Spring Mabel closed the cover on her piano, put a shawl over it and held a social tea, mostly for the female art students and their moms.”

Frazer’s paintings were not very popular and predominantly she relied on her teaching salary to live and take occasional art trips. In the early 50s, when Marilyn was an art student, Mesoamerica was a hot topic at the U., perhaps because of the Mormon connection or possibly due to the advent of television and the programming of world travel spots. Frazer journeyed south to tour and sketch the ruins at Palenque. With her devotion to the Mormon Church, Frazer must have felt a spiritual closeness to that area. Later, in her classes, she offered to the students tidbits of her travels including a tour of Italy and a floating trip down the Nile (I’m sure she was on a barge). She survived the Nile trip by eating hard-boiled eggs and oranges—two foods that required peeling—and therefore never succumbed to illness. Oh, and a sheik once proposed to her during her visit. She didn’t accept. 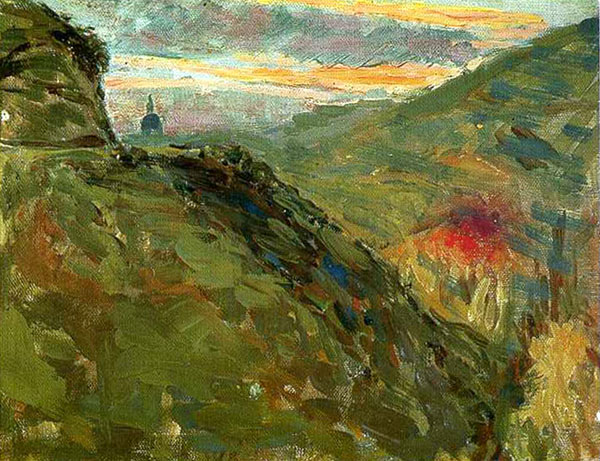 Marilyn remembered that Frazer was largely ignored at the U., as was she. “Women were not encouraged to take art classes,” she recalled. Frazer and another female teaching colleague, Florence Ware, had their studio/offices in the same area of the art department, then located in one of the old barracks west of the Annex. If you are ever in the office of the chair of the U’s Art History Department, Dr. Elizabeth Peterson, be sure to look above her door where you will find the old “Art Department” sign that hung on those barracks. Marilyn remembered taking a mural class from Ware who occasionally invited her to paint in her studio. While there, Marilyn witnessed a number of arguments that took place between the two women faculty members. “They argued about everything—politics, art, religion, everything.” Florence Ware came from a proper Presbyterian family, while Frazer was a centered and devout Mormon. The cultural differences were apparent, and Marilyn also remarked that Frazer told her that she could do better than by taking a mural class from Ware. It was Frazer who discovered the art department chair, A.B.Wright, and his model, Myrtle, together in Wright’s studio, as reported in last month’s column, that led to Wright’s dismissal as chair and relocation to France where he was captured by the Nazis.

While Frazer’s artwork was not popular during her lifetime, some of her interpretations on canvas were dramatic. Frazer’s The Furrow (LDS Museum of Church History and Art), 1929, projects a vivid work-ethic in the form of a farmer plowing his field. Mormon iconic seagulls follow in the furrows seeking worms. Sunrise North Rim, 1928 demonstrates Frazer’s versatility in staging vivid, banded layers of the Grand Canyon. One of Frazer’s artworks showed up at Williams Fine Art some years ago. I purchased it from Clayt Williams who pronounced it “a honey,” Williams’ unofficial highest ranking. The bright, painterly primary and secondary colors of this sunset on Great Salt Lake (Dave Ericson of Ericson Fine Arts says that it is an Italian sunset) have captivated me ever since my purchase. |2| I use the image as wallpaper on my cell phone. I also purchased, at an auction, a Frazer that offered a southerly view out of City Creek Canyon, including the dome of the Capitol, after the old Anderson Tower had been demolished. I later sold this painting to my attorney and fellow “art nurdz” friend, Shane Topham, who shares my same problem of keeping the knowledge of early Utah art purchases from our spouses. We feel like Lucy and Ethel.

“Two Spirits Fling Goodbye to the Parting Day” (1930), part of the Salt Lake County Public Art Collection, is a fanciful, almost surreal portrayal of what, we don’t know. Frazer rarely painted human subjects in her landscapes and perhaps because of this void, she was dared to include a pair of human spirits. The bright pink colors of the two spirits and dotted clouds (unless those are spirits, too), punctuate the cool colors of the composition. Painted in 1930, this whimsical artwork, must have brought some smiles and encouragement to those who were troubled by the effects of the Great Depression. Paintings such as this would indeed be rarely found during the next few years.

Frazer passed away in Salt Lake at the age of 94 and her work has since seen inclusion in art exhibits at the BYU Museum, in New York, Washington, D.C., a number of shows at the U, The Museum of Church History and Art, and most recently at the Museum of Utah Art and History. She possessed the fire of progressive modernism in the days long before expressionists like Lee Deffebach and Bonnie Sucec created memorable works. As Mabel Frazer’s sister once wrote, “I wonder if anyone really knew and understood her: At once caring, and thoughtful. Then in the blink of an eye all that was changed and she became impatient, crisp, almost unlovable, demanding to be left alone with her work, “since it is far more important than listening to meaningless babble.” A statement she made to a nurse in the hospital the day before she died pretty well sums up her character. She had been giving the nurse a bad time, and feeling a little remorseful for not having been more cooperative she suddenly grasped the nurse’s hand and said, “I really have a lot of love in my heart, but I also have a lot of damn-it-to-hell.” Being somewhat taken aback the nurse replied, “Well, you’re really human; so have I,” and gently stroked back Mabel’s hair.” (from Olpin’s, Utah Art, Gibbs-Smith Publisher, Layton, Utah p. 119.) 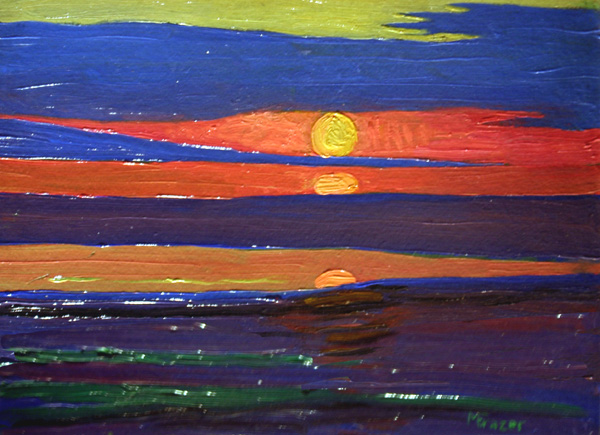