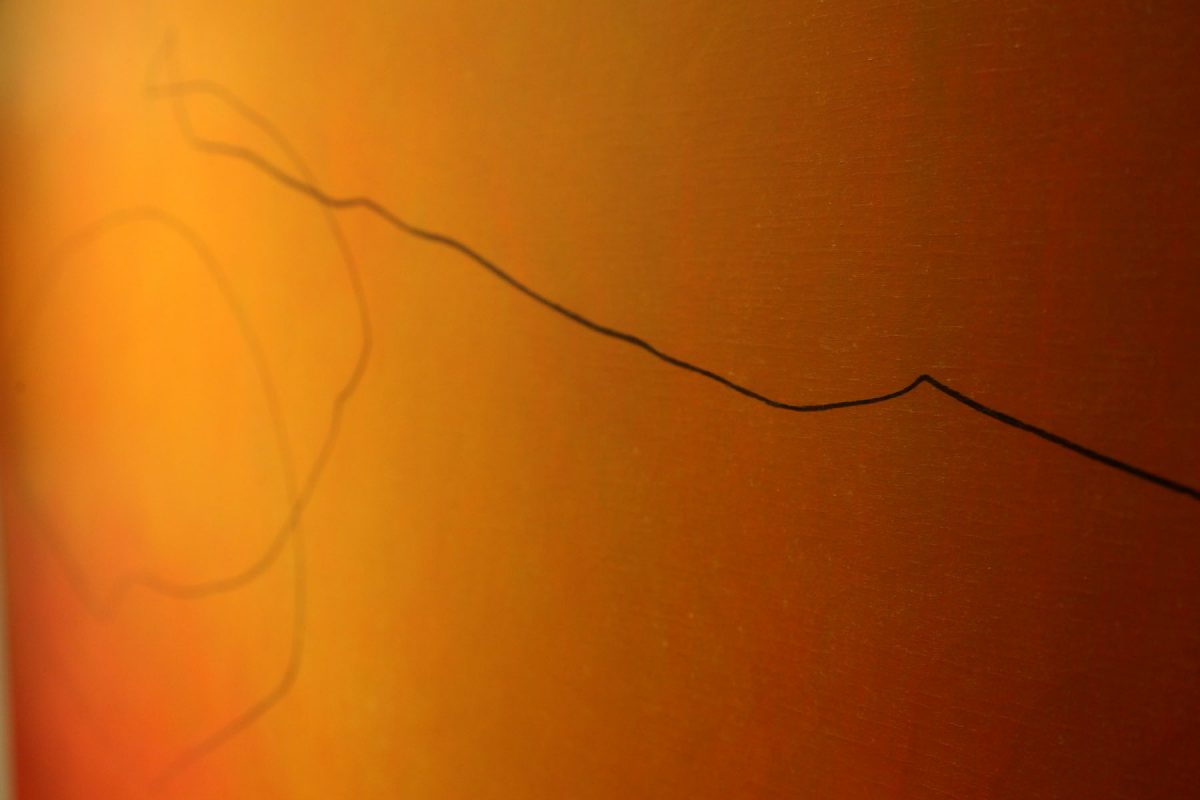 A detail of one of Paul Reynolds’ paintings showing the elegant flow of his graphite line.

At the opening of Line Paintings, I noticed a tall man standing by one of the works, seeming to dance with a young girl. He looked at her, then pirouetted with one hand out, asking with his eyes if she understood. And I knew, without seeing it, which painting they stood before. “Spinning” features a series of horizontaI marks, and this man, probably her father, was showing his daughter how the artist made those marks. Human generations have always taught their successors how to appreciate art, but the lessons have rarely been so physical. That’s because the recent painting of Paul Reynolds requires such explication, for the simple reason that in place of esoteric processes, it relies on fundamental facts of human experience.

If only an artistic breakthrough, in all its dimensions, were as easy to explain as that series of marks. When an artist such as Reynolds sets out, not just to serve different muses on different days, but to combine several artistic traditions into one way of working, it’s tempting to ponder the biographical steps that led him to undertake such a challenge. Unfortunately, human motives defy systematic explanation. Reynolds, who studied painting in the 1970s, spent more than 40 years in the solitude of his studio, following the principles of Abstract Expressionism. It’s not easy to reconcile those decades of discipline with a sudden desire to perform in public, and no doubt there’s a great story to be told there. But the five years of work that culminate in the current exhibition at Finch Lane were not spent escaping from the studio. Rather, in those years Reynolds took what he learned as a performer back into the studio, and with it reshaped his life’s work. 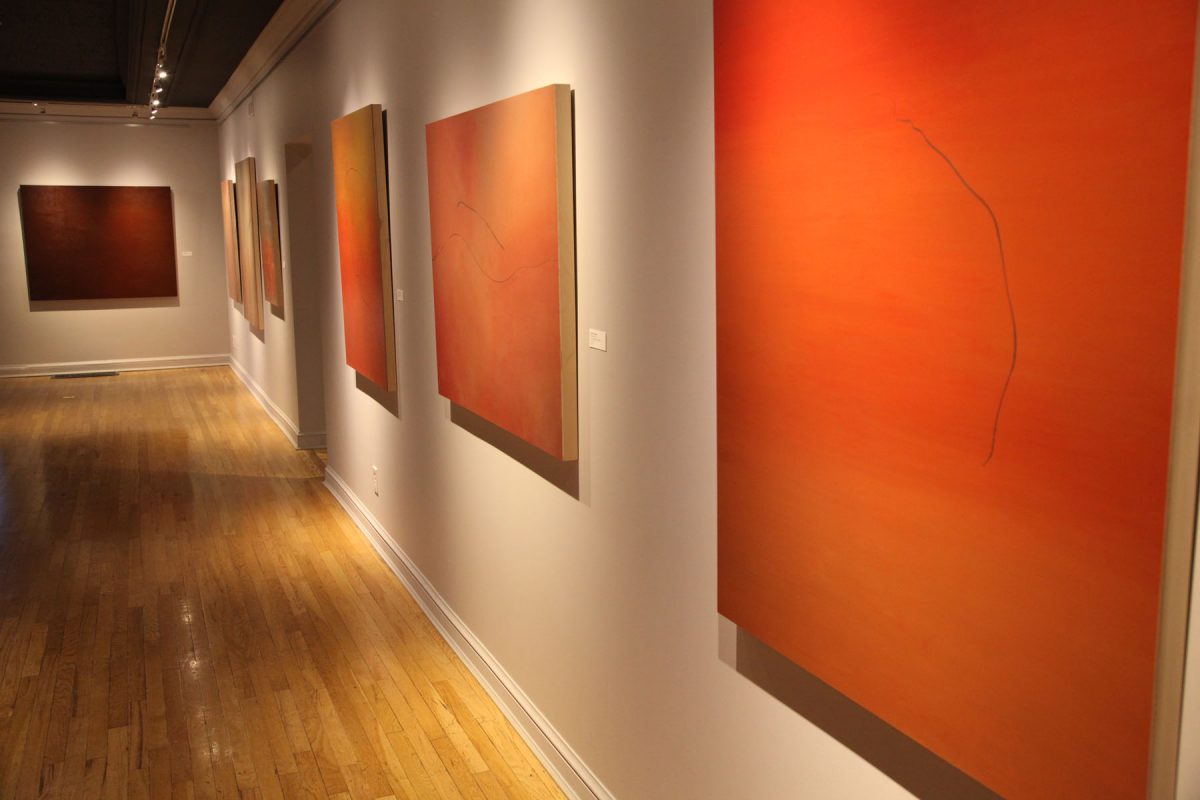 The idea behind Performance Art, which was originally called Action, was that whatever the artist would otherwise have done in the privacy of the studio could be done, instead, in public, and the product, providing that there was one, would remain as an “artifact” of the action. In general, the act outweighed the artifact, and attendance at a performance produced what was assumed to be a higher quality of aesthetic experience than merely viewing the artifact. Reynolds disagreed, and didn’t choose that path. He still wanted first and foremost to make paintings: durable works, but ones that exploited the lessons of spontaneity and serendipity, and the happy accidents they produce. 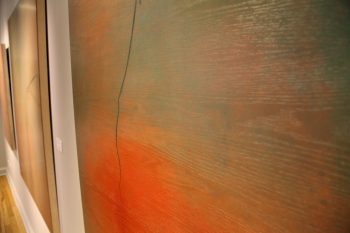 A closeup of Reynolds’ work reveals the grain of the birch panels he paints on.

The deceptively empty-looking paintings that grew out of this decision begin with hours of painstaking preparation that the final steps, the ones so glibly approximated by that young girl’s father, put entirely in jeopardy. Instead of canvas, popular for centuries for its lively response to the brush, most progressive painters today work on a rigid support. Reynolds has settled on birch plywood, which he uses raw, without sealing the material or concealing the grain pattern produced by peeling the veneer off the log, rather than sawing straight through it. This meandering pattern, which his thin layer of intensely colored oil sometimes highlights and at other times obscures, is invisible from more than a few feet away. At a distance, the color dominates, forming a visual cloud of almost featureless color, and great control is required to make something so analogous to a giant watercolor wash: one with no marks or boundaries showing.

Once the panel reaches this point, the artist presumably has to study it closely: dwell in it, so to speak, and get to know it. He’s not planning a specific next step, but rather acquainting himself with the space in which he will act. Previous performances have made him familiar with the range of movements his body is capable of. “Spinning” shows one action, but only one, and there are variations within variations of almost any possible movement. Some, like the gesture memorialized in “Turning Away,” we practice to the point where they become automatic, but others, while easily imagined, are unpracticed and clumsy, at best. Duplicating the action that resulted in “Head Circles” will almost certainly make the viewer dizzy. Taking a large artist’s pencil, and perhaps a few practice runs, Reynolds eventually approaches the luminous panel, with his eyes shut, and marks it indelibly. This is the moment of truth. 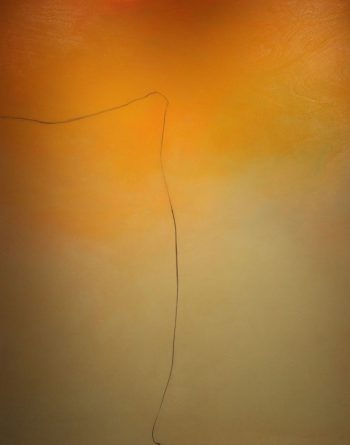 Sometimes the mark he makes disappoints him. In the gallery, he describes a studio-full of such failures. When he fails, only occasionally can he find a way to intervene, to modify what were spontaneous acts. Of course there are no rules in effect: no standards of purity. A title like “Several Attempts” literally describes the work’s makings. Surprisingly often, the pencil line not only works in isolation, but also interacts with the swirling or gradually blending background color, and even the grain pattern, to produce a success that could not be made any other way. And then there are moments when he opens his eye and can hardly believe what he sees. The pencil lines in evidence in the 17 panels here are, for the most part, strong and bold, combining thick and thin passages and evocative curves in a way that is liberated from the mental second-guessing involved in most drawing. The interaction among the equal elements, the wood, paint, and pencil, has the visual equivalent of the sonic quality of symphonic music, or progressive jazz. Solos, duets, and trios compound into a collaborative unit. Sometimes one seems to lead, at other times they fly apart. In places the pencil line floats in a cloud of atmospheric color. In others, it rides on top, or runs beneath, or surfaces here and dives there. And if, while watching dancers, we enjoy the somatic pleasure of our body’s response to the dancer’s exertions, why shouldn’t we feel the movements of the painter as he drew the decisive strokes that completed what we now see?

Speaking to Slug magazine four years ago, when his new project was beginning to show results, and reflecting on 40 years of Abstract Expressionism, Reynolds described his previous efforts as “working with marks and shapes.” In accordance with what was then a widely believed theory—that painting, by its nature, must be as visually flat as the canvas it’s painted on—Abstract Expressionism required surfaces cluttered with those marks, but in which no illusion breaks out of the picture plane, either into the viewer’s space, nor back into what art had taken for granted for centuries: the picture’s equally illusionistic interior space. Yet the reality, as anyone with unprejudiced eyes could see, was that the eye and mind projected depth into these paintings no matter how flatly the artist tried to render them. In his “line paintings,” Paul Reynolds has liberated himself to use real marks and real materials, ones that don’t pretend to be anything else, and yet to generate powerful and welcome illusions: views of space filled with color, in which lines alive with vigorous, muscular energy cavort, stumble, and find their way along. It’s art that partakes of the artist’s own actions in creating it, yet provides the result in permanent form. And it’s like the live release of a musician’s latest album—one where the musician performs alongside the recording. Here, as there, the artist is present to demonstrate how it’s done. But in these paintings, as in few others, no matter how much we imagine it, he will always be present. 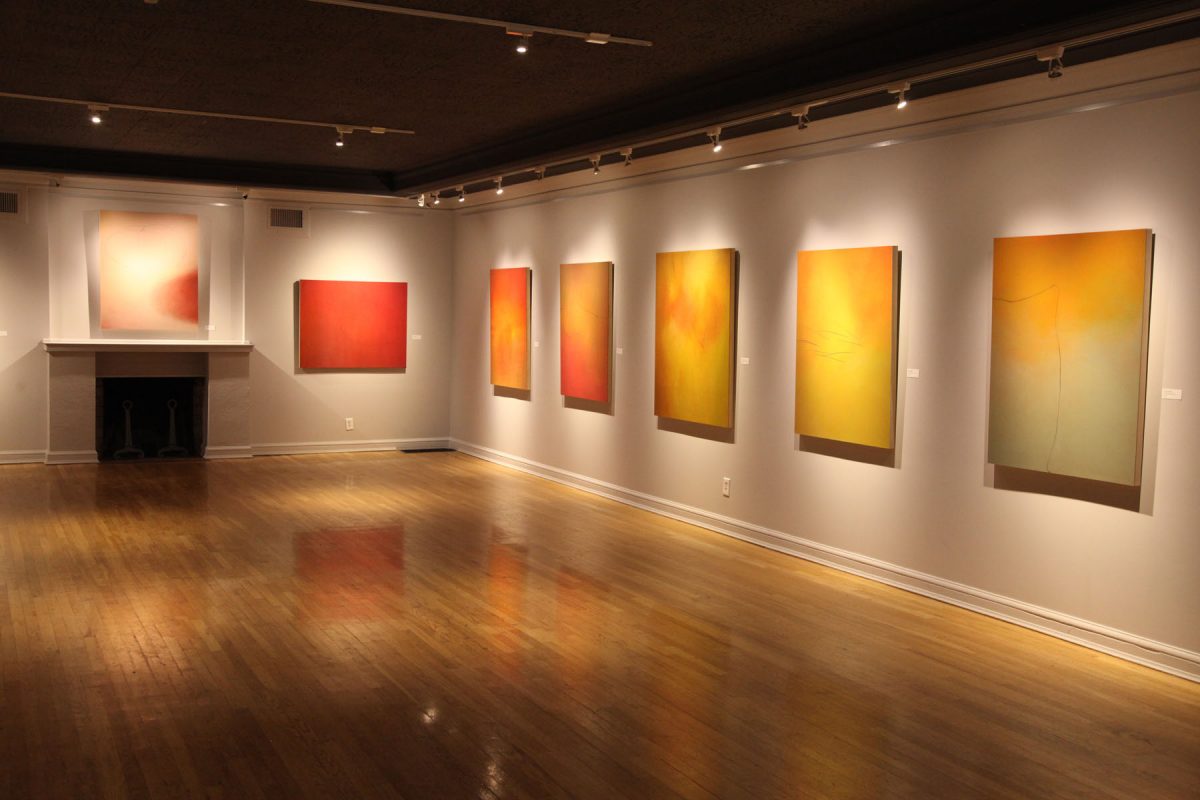