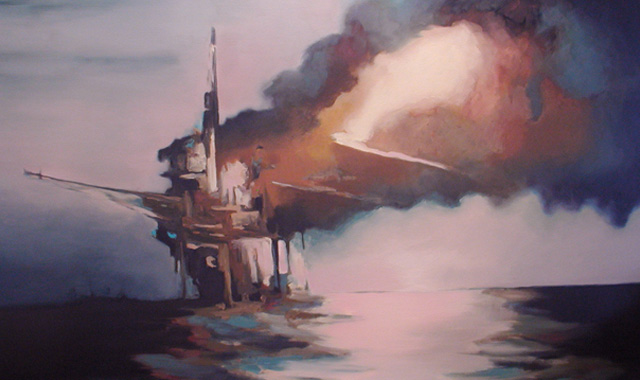 I like to emphasize the contrast between a first glance appearance of the strangely beautiful image and my fascination with them and the harsh consequences of the disasters depicted in them. —Lenka Konopasek

The first Lenka Konopasek I remember encountering was among the most unforgettable works of art I’ve ever seen. Set out on a table, and swirling up towards the giant wooden beams that support the old granary building that housed the Central Utah Art Center in Ephraim, it depicted in exact detail the destruction of an American suburb by a tornado. Row on row of precisely rendered, nearly identical houses, economically graduated by size and architectural features, were being torn apart, revealing their domestic interiors and spilling their contents. Furnishings, roofs, even family cars were spun in a whirlwind that ascended into celestial dissipation. What made this miniature maelstrom more remarkable still was that everything in it was cut and assembled from sheets of ordinary white paper. Thus structures that seemed solid—safe as houses, as they say—were revealed to owe their strength to mutual reinforcement and a cellular structure built from materials that, pulled apart, were seen to be individually flimsy. It recalled photos of the then-recently-attacked Twin Towers, spitting out gouts of office paper that cascaded through space into the streets below, where they blew among the ashes and ruins like 21st-century tumbleweeds. Konopasek captured in one instant the lifespan of human enterprise, turning an entire civilization back into the sheets of paper on which it had been conceived, designed, regulated, and its history told.

Many of Konopasek’s contemporaries share her interest in destruction, in the many threats to humanity not prevented by, often even caused by, our technology. But most of them, believing that art should proselytize, end up producing visual sermons: warnings about the dangers of environmental depredation, greed, and incivility that require volumes of text to explicate. Konopasek, who has more of an Old Testament sensitivity to hubris, modestly lets her images speak for themselves.

Each of these two dozen small-to-midsize oil paintings and four paper constructions—currently on view on the fourth floor of the City Library—simultaneously captures the paradoxical truth about unleashed natural forces: the explosions, fires, floods, storms, landslides, and structural collapses that result, produce horrific suffering and destruction, but for those who witness them, and the rare individuals who survive them, they offer spectacular beauty beyond the power of five senses to comprehend.

Ours is a culture that has drained the term ‘sublime’ of its real meaning, taking it to mean ‘refined,’ or ‘more lovely.’ But its origins lie in the alchemical power to elevate mere physical matter into entirely other, higher, even spiritual realms of being. As understood by the Enlightenment figures who coined it, the term denotes beauty, but it also envisions terror, such as would surely come from gazing upon the face of God. Sometimes in a Konopasek, that awesome face moves over the water, like the luminous smoke emerging from the burning “Rig On Fire.”|1| At other times the disorientation is visual and visceral, as in the tilting horizon of “Oil Platform Explosion.”|2| Always the dramatic composition is dynamically on the edge of balance, as though the viewer is in danger of sliding into the sea with the “Oil Platform Sinking.”|3|

And oh, what compositions! Konopasek studied art in Prague, where they still teach the mechanics of two- and three-dimensional design, but she shapes her works with a panache of her own. We view the “House On Fire”|4| through a tilting frame of negative space that could be trees, or smoke, or darkness, but can be no one thing throughout. Like Toulouse-Lautrec, she composes in depth from the back of the scene all the way into the viewer’s space, along the way breaking down distinctions between real materials, representations, and modes of thinking. Her canvases recall other great painters as well, including J.M.W. Turner, the supremely influential master of the Romantic Sublime, whom she updates with luscious local color and expressive, almost abstract brushstrokes. One way of describing the result would be as the closing bracket matching Monet’s opening: where the Impressionists celebrated the coming of Industry—the train, the steamship, iron engineering—she shows that the conquest of materials that followed has not allowed the human enterprise to actually overcome Nature, or the nature of being amidst things.

We can in part refashion the world, but we have failed to keep pace in transforming ourselves. As Einstein said about atomic energy, we have changed everything but how we think. Until we remake our thinking in a more collaborative mode, without hubris, Lenka Konopasek’s lush, beautiful, and emotionally and cognitively riveting images will continue to predict outcomes characterizing a reality we only think we can escape. 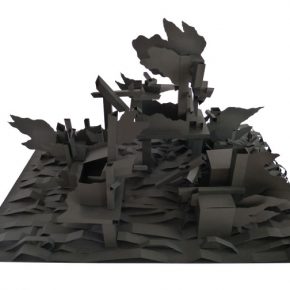 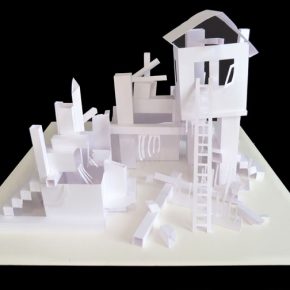 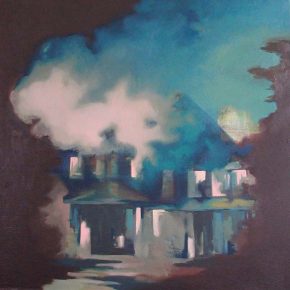 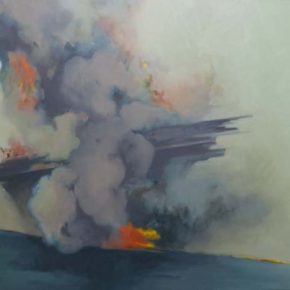 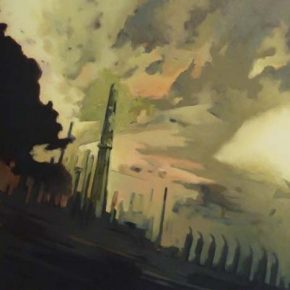 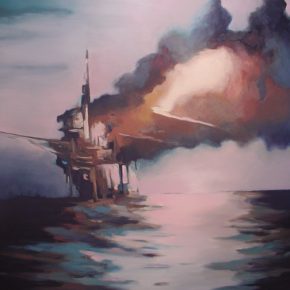 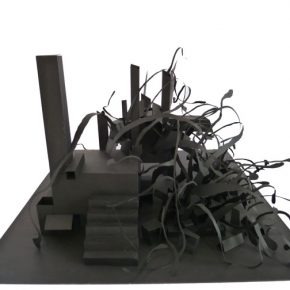 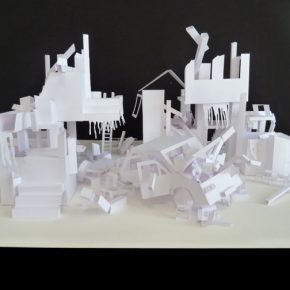 Closing In, paintings and paper constructions by Lenka Konopasek, is at The Gallery at Library Square through March 8. You can view more of the artist’s work at lenkakonopasek.com

Tagged as: Gallery at the Main, Lenka Konopasek