Spirit of the Land: LeConte Stewart landscapes at the LDS Church History Museum 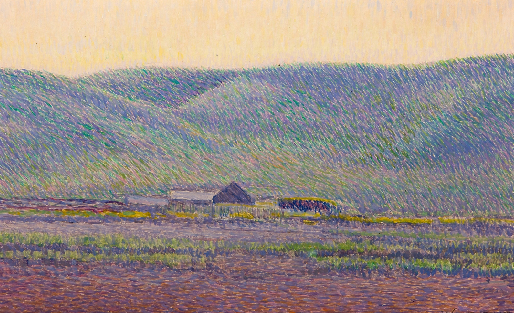 “Painting is more than expressing the appearance of things, it is expressing the spirit of things,” said LeConte Stewart regarding his relationship to his art form. This goal may explain why the prolific Utah artist was so drawn to the landscape, the subject of the current exhibition at the LDS Church History Museum, The Soul of Rural Utah. Mounted in conjunction with the Utah Museum of Fine Art’s LeConte Stewart: Depression Era Art (the subject of a future review), The Soul of Rural Utahpresents 130 paintings and works on paper, many of which are being exhibited for the first time. The paintings date from his earliest days and show that it was in the landscape that the artist “found himself” and his artistic voice. The Church History show is a tour de force of Stewart’s own moods, a personal exhibition, revealing his prolific abilities as an artist and his depth of feeling.As curator Robert Davis explains, Stewart was a formally strong artist. “His achievement as an artist arises from his ability to visualize accurate relationships of form and colors while also grasping the sense and meaning of the subject.” The entire show could be analyzed in critical terms of relating the formal and the structural, but experiencing the art in person breaks the viewer free of that temptation, allowing him or her to enter in to Stewart’s own experience of the spirit of the land. One very strong example is Stewart’s use of a nocturnal subject in “The Midnight Express,” 1917. An early piece, the panel in oil is two planes of blue, the land and the night sky with flickering light on the horizon and a smudge that might be the illuminated puff of train steam. Anyone of the Kaysville area might feel the mood of this scene very deeply, the vastness of the land, the chill of the air, the pummeling sound of a steam engine all enveloped in night… this was painting to be experienced.

Stewart was taught by Swedish-born New York artist John F. Carlson, who was well versed in European schools and techniques and passed this training along to Stewart. The range of artistic approaches available to him allowed Stewart to elicit a symbiotic relationship with his formal approach to the subject and the mood it effectuated. Stewart was a prolific artist whose decades of painting and teaching have made him one of the most influential artists in Utah. The majority of work in The Soul of Rural Utah comes from the first few decades of his career and show the artist experimenting stylistically. His motifs, however, remain fairly consistent. As Davis explains, “He was attracted to the land, to the loneliness of the deserts, the isolated homes and the relationships he found in the contrasts and disconnects.” As a young artist he was not motivated by anything other than his own desire to discover the land through his painting. “Each one is new and original and fulfilling,” says Davis. 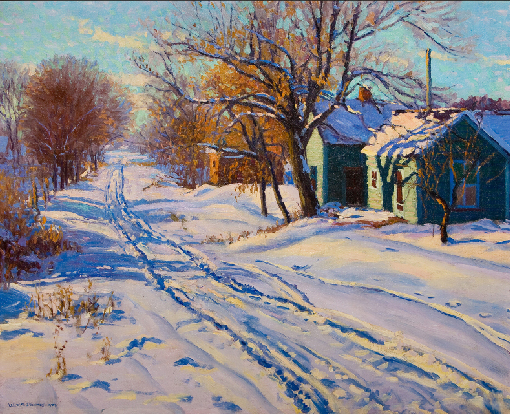 Looking at LeConte Stewart’s vision of the open landscapes of rural Utah, one might think of Vincent van Gogh in Arles, engrossed by the light he had discovered that allowed him to create his expressive wonders. In the mesmerizing painting “Kaysville, Winter” (1930) we can see something of the expressive color of van Gogh.|1| The white of the snow on the road and atop the houses has cool tones of violets, blues and greens; the hue of the house, partly obscured by sinewy trees, is a hypnotic shade of turquoise, lending this painting a distinctive expressive quality.

According to Davis, this expression was natural to Stewart and not contrived. He worked from the inside out. The mood came and the method followed, making the realization authentic and the mood palpable. “He did not like pretense or presumptuousness… he was ‘take it or leave it’.” From Carlson he “learned to use his teachings as a vehicle to summarize how the mind balances the structural and the beautiful and each landscape was a new experience,” says Davis. “He expressed his feelings through moods which was a balanced self-expression.”

“Afternoon Sunlight, October,” painted when Stewart was 30, is a brilliant example of his balanced self-expression (see below). The painting is an interesting composition, a hedge of trees on the left bordering a country road, a field of grass occupying the remainder of the foreground, a slight hillside to the right pulling the eye back into the center of the composition. The painting is a very successful plein air landscape after the tradition of the Impressionists. The sky would not be so bright without flakes of yellows, golds and pinks, or the field feel as rich without hints of amber and gradient tones of greens; the trees would not come alive without the variety of color reflecting the afternoon sunlight. The mood evokes relaxation, calm, joviality, rest, freedom… an abundance of good feeling.

This artist, cloistered in his artistic reality, so true to himself and his own experience, can he be relevant to an audience today? Is he a Utah “old master,” or does he still matter? For the exhibition at the LDS Church History Museum, much of the relevance of LeConte Stewart’s work comes from the legacy of the land itself, and the title The Soul of Rural Utah attests to, as Davis says, “the soul being projected by him through landscapes, sharing the spiritual through the visual.” Observe “Twilight on the Ranch,” a vista from Indianola, in Sanpete County, painted in 1950. The scene is a classic Stewart composition: a foreground of prairie, a middle ground with a ranch and hills, and then sky. No piece in the show takes a stronger academic approach than this one, looking something like a pointillist piece, and no landscape in the show evokes a feeling quite like it… one of peace, harmony and utter tranquility. The painting is in oil but the colors are light pastel hues, with cooler tones in the back, warmer in the front, the ranch a simplified shape. In this assemblage of dots and dashes of color, bathed in subdued twilight, one feels a serene sense of balance and calm… one might call this feeling spiritual.

The landscapes of LeConte Stewart are compellingly relevant today. They show a prolific range of formal approaches and each evokes a particular mood, an emotion, a spirit, a feeling… feelings that can be experienced on a personal level by today’s audience. These are not dry academic experiments but are LeConte Stewart’s experience and his personal artistic expression and are still as powerful and alive today because his experience of them then was truly authentic. Says Davis, “There were those who mastered the art of landscape and there were those who understood it,” and LeConte Stewart did understand it and feel it because he loved it. 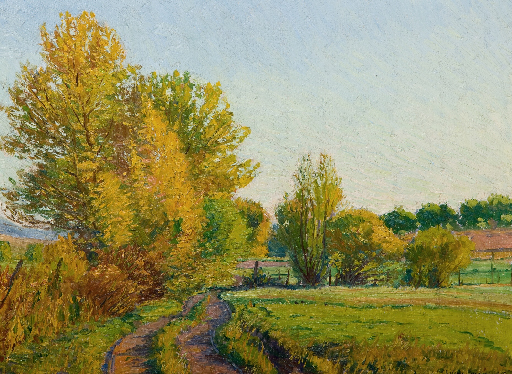