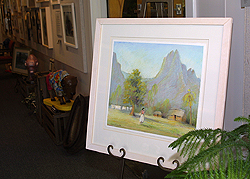 The Lamplight Art Gallery on Bountiful’s historic Main Street recently celebrated their first birthday. The gallery was the idea of Colleen Parker, a Bountiful artist, who for years maintained a studio above the retail space where the gallery is now located. She wanted to create a place where artists could find camaraderie and inspiration and where local residents could be exposed to fine art.

Parker’s idea began to develop as she met with other artists interested in her idea of a cooperative gallery. A few of the initial artists have since left the organization, but now the gallery consists of twelve artists from Davis, Salt Lake and Weber counties.

Each member of the co-op pays a monthly fee to help cover the business costs for the gallery. In addition they volunteer around sixteen hours a month to “sit” the gallery. Upstairs, where Parker has her studio, there is also common space for gallery members to work and also where many of the artists offer classes to the community.

Lamplight’s grand opening was a year ago this month. The gallery had begun in August, but held their grand opening in September, just after the September 11th events. September of 2001 was not the best time to begin a business. Yet, even though the gallery members have yet to see thousands of dollars roll in, they certainly feel their venture has been a success. As their mission statement says, their “purpose is to generate enthusiasm for creating and viewing fine art” and to provide an educational venue for the community. The artists have all felt themselves part of a larger group by being in the gallery and local church, educational and scout groups have all toured the gallery and had access to their services.

This relationship to the community is of central importance to the gallery. The artists hope to make Bountiful a place to make, see and purchase art, something Bountiful is not traditionally known for. Parker says “You don’t sell much original art in Bountiful.” Consequently, some of the gallery’s artists have introduced limited edition giclee’ prints to their offerings. In addition, the gallery has taken on a few pieces — mostly lathed-turned word — from artists outside the co-op. Whatever it takes, the artists at Lamplight plan to be around for a while to come.