Karin Anderson’s “Before Us Like a Land of Dreams” 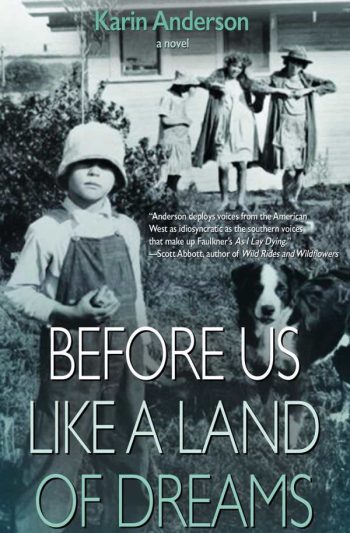 If you’ve ever said to yourself, “I wish Faulkner had lived and anxiously dreamed and feverously wrote his visions from the Utah/Mountain/Desert / Mormon/West” (instead of the South) then Before Us Like a Land of Dreams (Torrey House Press) by Karin Anderson is what you’ve been waiting for.

Trailing a mother challenged and dispirited by life, the story moves through the West to which she is tethered through experience and ancestry, culture and faith. As Forward Reviews put it, a central question that drives the novel is “what portion of our lives do we direct, and what portion rests upon the ‘dark hazards’ of ancestral preordination?”

The style of Land of Dreams can, as with the baroque Faulkner, make it feel massive, even though it only weighs in at just over three-hundred pages. Reading it feels at times like making a trek through the Mountain-Desert West, with voices from both the dead and the alive. What makes this novel, the author’s first, particularly recommendable are its regional meditations and critiques through myriad characters.

At the risk of over-stating a comparison with one of America’s — indeed, one of the world’s  —literary “heavies,” in a way Anderson has given us something comparable to Faulkner and his writings. In many ways the Mountain-Desert West and Mormondom are better subject material for the forms and teasings-out of genealogical anxieties re-embodied and invigorated by odd clippings of visions and cracked fringe existentialisms, something Faulkner has provided us with for years.

At least this is what Anderson has stirred, cooked and delivered: a volume that would have to be placed next to Faulkner in classes on American regional fiction. If this work is necessary (and I think it is), then it is because it is just as representative to the peculiar Mountain-Desert West as Faulkner was to his South.


Overall, the book feels like a compendium, artfully arranged, of the discarded clippings of Mormon and Mountain-Desert West history. The book bravely wrestles abandoned and underrepresented histories onto the page. What we are given is a recovered and organized, poeticized and presented drama of this unique region of the West that is only recently, really being visited to the degree it needs to be and arguably deserves. What is most refreshing is to get a veritable index of abandoned history, almost like the second telling of what should have been included with the first.

As someone who hails from the West, I found myself not only rethinking my cultural heritage and the identity of the Mountain-Desert West as a whole but my own identity and role in that whole. Everything that didn’t make it into earlier renderings of this history and culture has been given second life here: something as important as the fact that many of the cities throughout this region continue to experience the growing pains of transforming from hyper-suburbs to metropoles. A book like Land of Dreams makes sure to bring the severed roots back to the potato, the bones back to the chicken, and it even brings the West back to the Mountain-Desert West. It brought me back to my senses.

In Land of Dreams Anderson has created what seems a sort of anti-apologetic. Not that it works against the apologetics of what’s been called the Mormon Corridor and its environs, but that it works as a diptych to the histories and cultural identities we’ve already committed to. Those history-identities we have and have carried for years won’t go away, and so this book serves as a tempering to that history.

What the author adds to the tapestry of this region’s history-identity is a greater range of shades and colors, the expanded colors brought by offering a more diverse set of characters, and the expanded shades brought by a more diverse explanation of their motivations and morals. The romantic sheen that has been applied to our history is, by this book, made to stand next to the textures of a more modern reminder: our past isn’t as homogenous as some of us would like to believe.

Moreover, I could also suggest how reading this book is likely to get the reader to rethink the body-politic into a genealogical-politic. The story illuminates how family and relationships (given the region’s history with polygamy and the institutional and theological commitment to family) can impact how the political sphere has and will continue to develop. Or I might mention how the form of the novel (i.e. multiple voices from multiple perspectives all witnessing and commenting from their relative viewpoint [relative both morally and physically]) potentially serves as a sociological critique of the cultural norm of gossip networks throughout the Mountain West.

But overall, I think the book is rich enough to provide many different readings for many different years, and I would encourage anyone hungry for a regional wake-up call to pick up this book, settle into the couch, and not let that high-desert sun unsettle you until you see it differently.

Karin Anderson will be at Dolly’s Bookstore in Park City on Saturday, June 15 @ 2 p.m. for an author signing and meet and greet.

Before Us Like a Land of Dreams
Karin Anderson
Torrey House Press
320 pp
$18.95