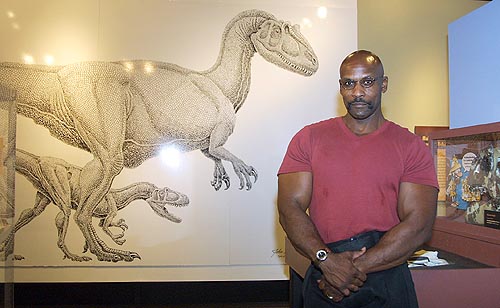 Standing beneath the life-sized drawing of an Allosaur and her young displayed along one wall of the Utah Museum of Natural History’s Dinosaur Tales Exhibit, the viewer is not only awed by the complete realism and preciseness of this image, but also by the absolute strength and grace it exudes. Though it is rendered in black and white only, the drawing seems to come alive with power and movement. And that is exactly what its creator, wildlife action artist John W. Moore wishes it to convey.

Strength, power and the grace of animal movement are Moore’s forte and a passion he has been committed to for most of his life. A man with a camera’s eye for realism in form, Moore’s Allosaurs, Stegosaurs and Ceratosaurs reflect his consummate attention to detail in every aspect of his illustrations.

Hundreds of hours went into the creation of these pieces, as Moore collaborated with museum curators to establish the authenticity of the reptiles’ representations. However, the postural activity the creatures are engaged in is largely the result of Moore’s own imaginative talent and seemingly innate knowledge of animal form, along with his extensive research on what is known regarding the species.

Another of Moore’s creations included in the Museum’s exhibit is a beautiful sculpture depicting a hunting Allosaur. This piece alone took over two hundred hours from conception to completion.

Moore’s process of creation is an involved and interactive one. “The Allosaur sculpture I created began by my drawing all the actual armature, then taking it to a welder to reproduce it in metal. I had to recreate the dinosaur drawing over the armature so that he could really see what I was trying to do. A lot of fun in sculpting for me,” Moore says, “is in coming up with some ingenuity, because not having been formally taught to sculpt, you must come up with your own remedies to various problems you may run into.” 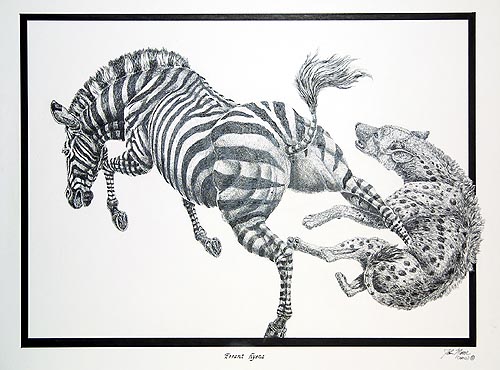 Moore’s extensive knowledge of animal species and their anatomies is apparent in his work. Drawing before he could talk, Moore was readily encouraged by his mother, who also loved to draw as a child. Moore felt always having his pencil and paper handy was simply “second nature…something I was just born to do.”

Moore was born in Decatur, Illinois and settled in Utah as a youngster. One of his first recollections of his budding interest in drawing animals relates to the local Days of ’47 Parade held every year in Salt Lake City. As a young child, Moore would sit on the curb with his drawing pad and sketch the huge horses used in the parade as they were being readied for the festivities. Since that time, he has indulged his preference for portraying large and powerful animals.

In school, his teachers recognized his propensity to observe and recreate what he saw, encouraging his talent. Moore feels he would have pursued art regardless of encouragement: “Having a pencil and paper is what fulfills me.”
john moore

Moore spent many evenings watching Mutual of Omaha’s Wild Kingdom and American Sportsman on television, mentally recording the nuances of each animal presented. Extremely perceptive, he was continually trying to prod his schoolmates and friends to “see what I see” regarding animal anatomy and behavior. Moore recounts watching intently as his older brother dressed a deer in their backyard, mentally recording how muscles and sinew connect to bone and how the skin then fits over it all.

Moore spent many summers in Denver as an adolescent visiting the Museum of Natural History and sketching the stuffed, mounted animals in the dioramas there. Even then his yearning to depict animals in action was becoming apparent. 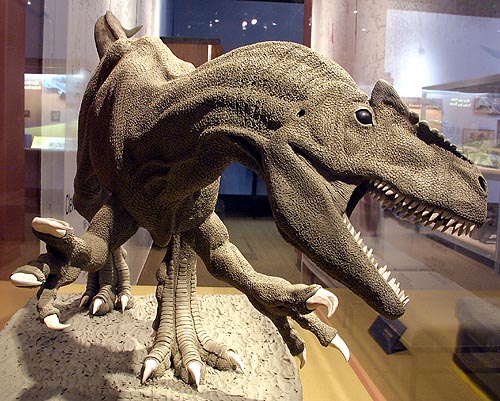 Moore has also been involved in doing freelance illustration work that has been reproduced into limited edition, signed prints sold throughout the country at national dog shows. These pieces depict each purebred dog’s breed in their natural state, performing the original tasks they were bred to do. Each dog’s ancestry was thoroughly researched to define the animal’s purpose. His representation of a Great Pyrenees fending off a wolf or his Bull Dog bringing down a bull typifies Moore’s signature style, although he is aware that some may find this style rather aggressive. “I have sometimes depicted animals in the act of killing or being killed. I draw it not because it’s violent, but to me, motion is simply more interesting than seeing something sedentary.”

“Philosophically, there is no violence in nature,” Moore says. “Even if there were not two animals involved in my illustration I would still prefer to show the animal at least running, even if it is not running after anything – I like to capture that window of acction with the animal.”

Moore is a Field Program Manager with the Department of Animal Control, a position he initially sought due to his interest in dogs. Although drawing at work is not in his job description, he is known to sketch while in staff meetings, which coworkers have just “come to expect.”

“Drawing doesn’t CONSUME me,” Moore explained in the confines of his studio. “I know when to step away and take a mental break.”

In his studio, he is surrounded by large-format productions of some of his favorite pieces, stacks of National Geographic magazines, shelves of reference and nature books and periodicals, as well as videos and sketchbooks. An illustration of a sabre-toothed cat and a pre-historic bison locked forever in mortal embrace sits adjacent to a large book of one of Moore’s most admired artists: Norman Rockwell.

“It really doesn’t matter — my surroundings,” he says. “I may draw alone in my studio, or draw surrounded by my family watching TV — although I would never do intricate work such as an eye or drawing individual hairs without total concentration.”

“Each one of the drawings you see is a product of many small sketches and ideas that eventually gel into the one that I want,” Moore explains. “Then I transfer that to a larger board and the pen & ink is the final stage.”

“Painting is the only thing that occasionally stymies me,” Moore states as he refers to a color illustration. “I’ve envied many times an artist’s ability to paint – but never their ability to draw.”

At Utah Technical College, Moore continued his artistic studies, graduating with an Associates Degree in Commercial Art. “But what I really wanted to do was animal anatomy,” he explains. “Most of what I do comes from simply feeling – from watching and observing. I don’t see myself as an amazing talent; this is just something that I’ve done forever.” But what an amazing talent it is!
moore

It is this amazing ability that has led John Moore to continue his passion in many, quite varied venues. He has submitted his work in the Wyoming Fish & Game Deptartment’s yearly commemorative wildlife stamp competition, has been selected as a Salt Lake City Art & Soup participant for two years, and has been chosen to exhibit his work in the Salt Lake City Arts Festival twice.

Pen and ink are his most comfortable and familiar forms of media, though he would love to do more sculpture. “The reason sculpture is so intriguing to me is because it is not an illusion – anytime you are putting something on a 2-dimensional paper or canvas, you are creating an illusion that simply LOOKS real,” Moore says. “But when it’s sculpture, it’s palpable, you can feel it and you must do it right from all directions.”

It was this appreciation of the physical form that led Moore into professional bodybuilding, a “natural progression” from his passion of capturing animals’ active musculature to sculpting his own body to reflect a similar ideal. “Looking back on my years of involvement with body building, I’ve concluded that my motivation for it was that the animals I most loved to portray had wonderful, powerful musculature – the horses and big cats. I wanted to embody that in myself, also. I actually look at myself as a physique artist, not a body builder.”

Moore was requested to sculpt a version of a championship trophy depicting a fully-flexed physique to be used in body building awards the same year he won the Natural All American Body Builder Championship himself.

A fine art professor at Westminster College suggested Moore approach a gallery in Jackson, Wyoming for exhibition, and after being accepted and shown there, Moore went on to exhibit his work in Visions Beyond Our Time Fine Art Gallery in Denver, Colorado, as well as the Distinctive African-American Art Gallery in Salt Lake City. He also participated in the Child of Light Sculpture competition for the 2002 Winter Olympic Games. 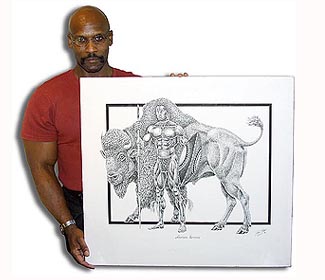 Although Moore’s degree is in commercial art, he believes there really is no differentiation between his varied works and “fine art. You can’t say Norman Rockwell’s work wasn’t ‘fine art,’ although he’s considered a commercial artist. I don’t know where you would make that distinction,” Moore says.

Apparently, the Utah Museum of Natural History concurs. They have recently offered Moore a position teaching animal drawing at the Museum throughout the winter, beginning November 15th (Inquire at the museum for additional dates/times). These classes will be tailored for the entire family and will give Moore another opportunity to showcase his unique talent and expertise portraying the exquisite nuances of animals.