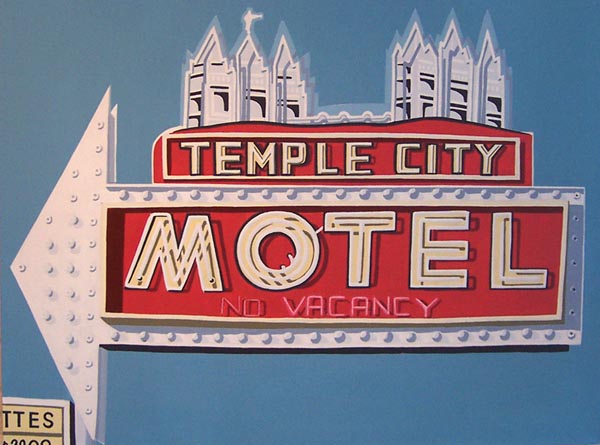 “Pop Nostalgia” is an exhibition of recent years’ work by Joe Carter and Paul Heath, who have teamed up at the Rose Wagner Performing Arts Center Gallery. As suggested by the term “nostalgia,” Heath’s and Carter’s sense of “Pop Art” has a far warmer, friendlier evocation than the distant, anonymous multiplicity of Andy Warhol or the wry comic book cynicism of Roy Lichtenstein. Perhaps this fact is an expression of Pop Art as reflected in a warmer, friendlier city.

In paintings (some on scroll-cut plywood), silk-screens, pastels and ceramic tile, Paul Heath celebrates cherished pop objects and remembered images of growing up in Utah and Salt Lake City, where he still lives. Heath considers his work an “eclectic record” of past and present states of Salt Lake, before changes have or will occur. These images are auto-biographical in that they provide a sense of both continuity and change from his childhood to adult years in a particular place. Even an image of an old toy (“Fire Chief”) likewise addresses the theme of change through time.

Most images Heath has chosen would likely evoke fond memories from anyone who has lived here, especially if for more than a decade or two: signs from the Temple City Motel, Snow King and a variety of old movie theatres. The silkscreen “SLC Alphabet” provides the viewer with a patchwork of alphabet clues from sign snippets of old Salt Lake sites and invites us to play a game of identification. Harman’s, the Avalon, the Villa and Dee’s were readily apparent to me. Others elude quick recognition.

Heath feels a need to live for a time with an object or place before feeling that he appreciates it fully and can paint it authentically. His affection for his subject matter is manifest in his enjoyment of careful craftsmanship. He loves the physical nature of cutting and assembling plywood pieces for painted relief works such as “Rainbow Randevu” and “Ogden Snowdome.” His clean drawing and hard-edged color areas are flat, even spatially planar, but reflect a sense of affectionate loyalty to the nostalgic subject matter and a linear Pop Art sensibility. 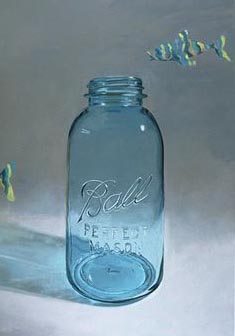 Joe Carter is an experienced electrical engineer, but left the field in 1998 to pursue his lifelong dream of painting. His engineering background carries through to solving the problems of naturalistic painting, one step at a time. He works to record, as faithfully as possible, relatively small objects that he collects for their very quality of being considered common, mundane or worthless though they reflect the very culture that considers them so. Many of these are displayed around the studio, where he has lights and an elevated stand for the object he is currently working on. This allows him to easily study the object closely and carefully enough to satisfy his demand for detail and “getting it right.” His approach to realism is more illusionistic than Heath’s, with carefully blended colors giving a greater sense of 3-D modeling extending behind the picture plane.

Carter’s quest for precision in portraying the mundane objects of pop culture (such as in “7-up”, “Clipettes” and “Philco”) does not disallow a more imaginative quality in some of his paintings. “Ball”, for example, features a two quart Ball Mason jar painted meticulously in pale aqua tones on a simple modulated light gray field. Floating in this field is one multi-colored fish and the tail of another swimming away, giving a vague, surreal sense of being under water.

Even more open to interpretation is “Mercy”. Here a blank-faced paper doll dressed in white (an angel?) stands in the middle of the painting. She is surrounded by strands of brightly colored ribbons and has a “halo” of golden tinsel above her head. The title certainly seems fitting, but much is left to the viewer’s imagination.

In all of his images, Carter seeks a sense that these objects are in their “own world,” where there is a kind of “daydream existence,” a space where the painting takes on a more precious value than does the object.

A careful caressing of old objects, places and memories. A sense of the nexus between misty dreams and the popular market culture of decades past. This is “Pop Nostalgia,” as defined by the work of Joe Carter and Paul Heath. 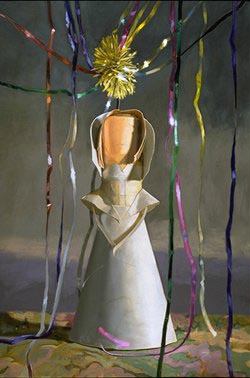