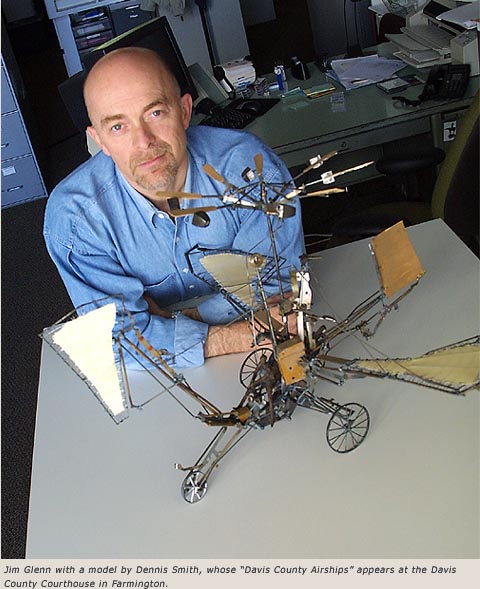 These are just a couple of ambitions Jim Glenn has for public art in Utah. For the past six years, Glenn has held the position of Public Art Coordinator for the Utah Arts Council. Maintaining the program and proving its significance to a “still learning” legislature has been a constant battle. Glenn didn’t necessarily see himself working as an arts administrator. But he has followed his ambitions his whole life, so be assured that the program is run by a passionate believer.

The arts have always been a passion for Glenn. His pursuits to make the arts an integral part of his life have taken him back and forth across the continent before he started calling Salt Lake City home. The journey began in Sallisaw, Oklahoma where he was raised. “I thought I was an artist in high school. The art teacher really liked that I was painting while all the other kids were doing ashtrays, but I was a big fish in a little pond.” The only way he could convince his parents that the arts was a practical career path was if his chosen major was commercial design, so that became his official major at Central State University in Edmond, Oklahoma.

“As part of the general ed requirements for physical education, I took a modern dance class. That bug bit me so I started taking more dance classes and decided I had to get out of Oklahoma. I remember getting a copy of the San Francisco Chronicle one weekend and I was reading about the symphony and the ballet and everything that was going on.” So he, along with his cousin, loaded up his 1960 Chevy Bel Air and hit the road for California. “It looked just like the Joads in Grapes of Wrath – the back seats were full and we had stuff tied to the top of the car.”

Somehow they ended up in Mountain View, California and that’s where Glenn stayed – for the time being. He started framing pictures to earn money to pay for dancing lessons at the local community college. “I took some summer workshops with Bill Evans in Seattle and I started meeting people in that workshop. Ririe Woodbury came to the DeAnza Community College in Cupertino and taught a master class.” Glenn eventually moved to San Francisco with the Paul Scardina Dance Company. Not long after, he decided it was time to finish his degree. The University of Utah had a reputation for being a great dance school, so Glenn came to Salt Lake and earned a BFA in modern dance. But he wasn’t here to settle just yet. “I moved to New York and danced for Clay Taliaferro who I met here in Utah. Then I got a job with Hanna Kahn – a pretty reputable company. But every year her NEA grant would get smaller. It got too hard to survive.”

Glenn’s struggles with budget cuts and surviving as a dancer has helped him understand the plight of many artists who have to take up odd jobs to pay the bills. “I heard about what I thought was a picture-framing job – but turned out to be with an art consulting company called Viart. I was hired as their framing consultant.” What he thought was going to be a side job to supplement his income became a full-time job that opened up different kinds of opportunities. “All of a sudden I was using my art history training again and learning about contemporary art. I crossed over into project management and oversaw shipping, installations, and database management and ended up doing that for 13 years. And then, in 1992 I got cancer.”

Glenn endured chemotherapy, radiation and surgery to treat his cancer. When he came out on the other side, he decided he needed to check his priorities. Living in New York City was too hard and he wanted to enjoy life more. He wanted to be able to relax, hike and camp. He wanted to travel for pleasure rather than work. But it took him two and a half years to get out of New York before he moved back to Utah. He continued doing freelance work for Viart, but every time business slowed down he got nervous and worried about insurance. So he decided to take a more practical route in the art field.

“I saw a notice for a position at the Utah Arts Council for the assistant coordinator in the Arts Education office. I was lucky enough to be hired by Jean Irwin. That was a good way for me to establish connections in the arts community. Soon after, the Public Art Coordinator position opened up and that was actually closer to what I had been doing for the past 15 years; doing project management for corporate clients, commissioning artists to do work, etc.”

Working in state government has been a different challenge for Glenn, coming from the private sector. He was used to working with CEOs and top executives. “It was easier to go through a stack of artwork because you were working with a small group of people. In the public funded projects it’s all done by committee. I had to learn how to act instead as a moderator and help the committee see what the artist is proposing. I have to make them understand how important their decision is because they’re impacting a broad spectrum of people with a broad spectrum of tastes. It’s a challenge selecting strong and important work without compromising the impact so it pleases a larger group of people. You don’t want it to be watered down.”

Glenn explains that not all visual artists can be public artists. “A lot of artists thrive on the challenge of public art and really like that dialog and coming back and forth with ideas and the challenge of trying to make a connection with a very institutional building and the community it’s situated in. But then there are other artists that really resent that intrusion into their process. It’s different from solitary studio life. It’s a very civic process.”

Because the artist is being commissioned to meet the needs of a community and a committee, the artwork can sometimes trigger controversy. The best way to avoid that is to include the artist early on in the process with the architect and the committee members. Early collaboration also makes for the most successful public art pieces – successful, meaning in tune with the community and the facility. “We’re working with the AIA of Utah and other state agencies to make artists more involved in the design team. That’s hard to do when a lot of people consider the art as a mere decoration rather than an integral part of the building.”

Most arts administrators share the challenge of acting as an intermediary between artists and the public – especially those working in the public realm. It can be difficult to communicate to artists that there are limitations when it comes to bureaucracy and it can be difficult to communicate to bureaucrats and civic committees the impact and necessity art has in a community. But when you find someone like Jim Glenn who is well versed in the arts and can also speak the legislative language, you are in good hands.

“Once you’ve tasted that angst and joy of creating, it’s hard to let go of it. Maybe that’s why people like me choose this career so we can stay in the arts but still make a living. There are a lot of stereotypical things said about artists, like they’re difficult and irresponsible, but that can be said about any group of people. It’s just a different circumstance. People that are creative aren’t necessarily worried about how many pieces of paper come in the fax.”

Glenn’s assistant, Fletcher Booth, is actually a practicing artist who splits his time between teaching art at Weber State and working for the Public Art Program. When asked how it is to have an artist as his administrative assistant, Glenn jokingly replies, “Now that’s a different story! No, it’s really great having a practicing artist as part of the staff. He’s more in tune with the community than I am, and also he has a good way of looking at things that I may not have thought of. That creative nature that he has applies to his work as well. I just have to double check the fax pages.”

As far as the Public Art Program is concerned, Glenn has both hopes and fears for what can happen. “Sometimes in this bureaucracy they say ‘what would you do if your budget were cut by 30 percent?’ – and that’s a really hard thing to do. And then they ask ‘what if it was increased by 30 percent?’ Once, a couple years ago they asked ‘if money was no object what would you do?’ It was almost too much to handle; it was scary. It was so overwhelming because we’re not used to thinking that freely.”

In an ideal world, Glenn would love to fund public art happenings where a group of artists come together regularly and talk about creating a public art community that would last for a month or two. “I would make it more of a vibe – a lively program rather than one where you had to find materials to create something permanent.”

In the meantime, Jim Glenn continues to fight for public art in Utah. He works with artists, administrators and legislators to make it happen. To keep himself sane, he continues to take dance classes. “That’s the art form that feeds my soul so I can keep myself happy. I hope my experience in dance and performing arts along with my experience in the visual arts can help me see art with a broader perspective. The performing arts gives me a sensibility about time and space and texture and the same properties in visual arts can help me see different things in dance. So hopefully a wide variety in my background creates a broader view of the arts in general.”

The Utah Arts Council’s Public Art Program is housed in the Rio Gallery facility at the Rio Grand Depot. The Utah Public Art Program maintains slide images of artists’ work in all visual media that are interested in public art commissions. To be included in the slide bank download an online registration form .