Jared Nielsen and the PARTNERS Exhibit 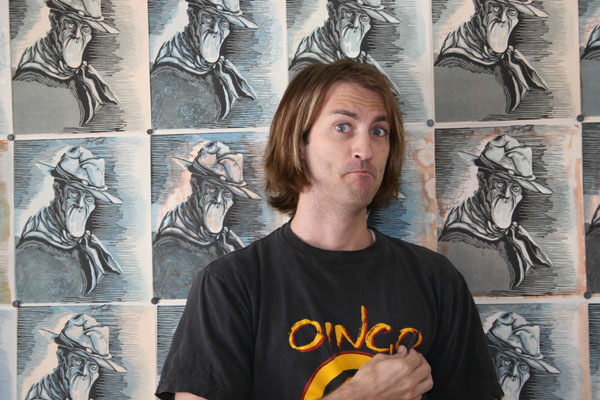 Jared Neilsen in front of his work

The truly creative mind in any field is no more than this: A human creature born abnormally, inhumanely sensitive. . .They must create, must pour out creation. By some strange, unknown, inward urgency they are not really alive unless they are creating. Pearl Buck

Artists are not truly alive unless we are creating.

I remember the first time I noticed Jared Nielsen. I was traveling to a print conference at Rutgers University in New Jersey. He was sitting several rows ahead of me on the airplane showing his prints to the passenger next to him. I remember smiling and thinking what other type of artwork can you share on a plane, but prints? Prints are small, intimate and portable. Jared and I met up again last winter when he came into Saltgrass Printmakers ready to print a series of varied edition prints for an upcoming exhibition. During his time in the print shop, I noticed that despite his continued struggle with chronic back pain and medication adjustments, Jared sounded better. He was engaged, focused and happier.

In January, I called Ruth Lubbers to recommend Jared for the Art Access/VSA of Utah Partners: Visual Arts Mentoring Program — a program I believed would give Jared the resources and opportunities to continue creating prints. The Partners Program is a mentorship program that matches adult artists with disabilities or other life situations with professional artists in the community. Jared and I have worked alongside and learned from each other as we prepared for the PARTNERS group exhibition opening this month at the Art Access Gallery. Jared is highly motivated. He has set several goals to accomplish during this program, including putting together a portfolio to present to galleries, professionally documenting his work in slides and digital formats for submission to juried print shows across the country, developing a new series of etchings, tackling relief printmaking and has proposed a collaborative art project for the two of us.

To begin with, Jared is in persistent pain from a snowboarding accident. It’s been an ongoing struggle with debilitating pain which doctors haven’t been able to successfully treat. Jared is also being treated for Attention Deficient Disorder and Disassociative Identity Disorder (“DID”). DID is a disorder that involves a disturbance in both the memory and the identity of an individual. It’s a defense mechanism that helps the individual to cope with past trauma, but creates serious disabling symptoms.

Jared’s disabilities are hidden behind his playful, boyish looks. For Jared, it is a daily struggle with his back pain that wears away at his physical strength and drains his ability to manage the symptoms of his ADD, depression and social anxiety. The pain pushes to the surface and Jared can’t focus or work for more than three or four hours a day. It’s difficult to hold a job, which means he can’t carry his own insurance and Medicaid doesn’t cover all the special tests and counseling he needs. Daunting as all this is for Jared, Ruth and I were struck by his forthright and open acceptance of his mental and physical disabilities, “It’s who I am,” he says. Integration is a theme that Jared uses to describe himself and his artwork. Jared sees all of this as beneficial, because it’s what he draws on while creating his prints and paintings.

Jared paints and makes prints, but printmaking especially fits Jared’s creative impulses. He is trained in screen and intaglio printmaking processes that he uses to explore subconscious associations. Jared loves the detailed technical processes involved in printmaking. “I have to know how it works, so I can use it to expand the images,” he told me. Each printmaking medium demands that the printmaker be highly skilled and trained in all the technical aspects of the process to be able to successfully create an edition of prints. Each print matrix created gives Jared endless combinations to experiment with in his imagery. He tries to meld his technical skills as a printmaker with his emotions and feelings to create images that portray his essence.

Printmaking is a very physical medium and demands a lot from Jared. He has to be on his feet for many hours hunched over the ink slabs and presses. If he overexerts himself, the pain increases and drains his physical strength allowing the depression and anxiety to become overwhelming. It’s a vicious circle for Jared. “If I’m not making art, I’m dying,” is his attitude, but making art exacerbates the pain he experiences. Jared works on integrating the pain with his emotions so he can channel all of his energy into his imagery. When he is “in the zone,” Jared feels as if he is actually dealing with issues in his life and not ignoring them. His prints include figurative and abstracted forms with textures that are deeply layered and allow each viewer a myriad of interpretations. The journey of making art and the exploration of concepts is what Jared thrives on in his artistic endeavors. He sees each viewer, with their open-ended interpretations of his art, as a continuation of his creative process.

Stefanie Dykes, is a graduate of the University of Utah’s MFA program and co-founder of Salt Lake’s Saltgrass Printmakers.