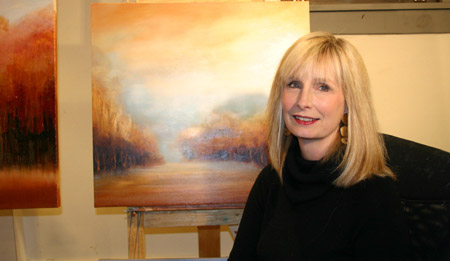 On a typical weeknight in Helper, Jamie Kirkland can often be found surrounded by five or six of her artist cohorts and a sizable stack of poker chips. In the five short months that she’s lived in this small southeastern Utah town, she has become quite the card shark.

The remainder of the group content themselves with bad imitations of Jamie’s lyrical southern accent. She speaks in a slow, articulate way and always addresses everyone by name. Occasionally Jamie will burst out into a very bad rendition of a Broadway show tune. “Everything’s Coming Up Roses” seems to be her current favorite. Her audience bursts into a fit of giggles, but after a few minutes has to cover their ears and beg her to stop.

Moving to Helper was a spur of the moment decision for Jamie. Several of her fellow classmates and friends from the University of Utah had relocated to Helper, where there is a burgeoning art community amongst its 1,800 residents. They live where clean air is plentiful and large studio spaces are affordable. 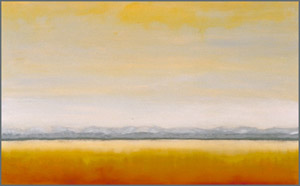 “I knew I would be living in a community where the focus was art-making, and that was appealing,” she remembers. “It inspires me and challenges me and encourages me to grow. There is something so fabulous about being with other painters.”

Not all roads led to art for Jamie, however. After a small-town southern upbringing, she studied at the University of Alabama in the 70s, majoring in art. But, before she completed her studies, she gave into the constant bombardment of the “art lacks practicality” myth. Jamie left the university and moved to New York City. For several years, she worked in restaurants while pursuing a modeling career, which landed her several national magazine covers; she kept in contact with her art through occasional classes at the Art Student’s League and Parsons School of Design.

When she moved back to the South after her stint in the city, she purchased a raised, 1880’s Creole Cottage on the Gulf Coast of Florida in Pensacola’s Historic Seville Square. With ambitions that exceeded her startup money, she opened a gourmet bakery. The bakery eventually transitioned to a French restaurant, aptly named Jamie’s French Restaurant. It has been rated as one of the top 100 restaurants in Florida, according to Florida Trend Magazine. The restaurant, which Jamie has since sold, is still a local and tourist favorite. 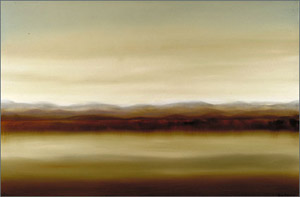 Jamie then opened a metaphysical bookstore in Gulf Breeze Florida, offering classes in Yoga, Tai Chi and meditation. After a divorce, she moved to Crestone, Colorado. Her newly found slow-pace allowed art to re-enter her life. She took up art courses at a small state college in Alamosa, Colorado. After a time, though, she realized she needed a more formal and in-depth education if art was to be her focus. She settled on the University of Utah because she was impressed with the foundation program required of all art majors.

One art degree and a blossoming art career later, Jamie has relocated to Helper and is currently preparing for a show at Winterowd Gallery in Santa Fe, New Mexico on March 31, 2006.

One of Jamie’s greatest pleasures when selling her art is the knowledge that someone is consciously choosing her work for their home. Because she seeks peace and tranquility in her own home, she appreciates that those collecting her work are going to have a chance to interact with the painting everyday and that it will be part of the tone of their life. “A painting can evoke so much joy just through its color or a happy memory associated with it,” she notes. 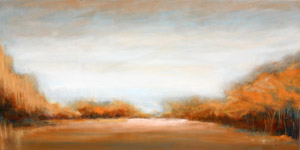 Jamie’s comments on art often sound like a well-edited artist statement.“I have always been moved by Iris Murdoch’s description of the artistic process when she said ‘Artists dream of a silence which they must enter as some creatures return to the sea to spawn.’”

Jamie leaves complexity to her art discourse, though. Mood, color and simplicity are the trademark of Jamie’s abstract landscapes. She mixes her colors on the canvas, allowing herself to react to her surfaces and paint quality. “I am always after that elusive feeling of harmony. I know when the painting hits the right note.”

Jamie said she is probably unique as an artist, in that she enjoys the marketing and business side of art making. “I have developed a lot of skills in this area and it is pleasurable to come up with new ideas of how I can support myself with the skills I have acquired.”

She typically spends time in the morning communicating with her galleries and web designer, John McCallum. Jamie finds that having a strong website and business card is a crucial part of portraying yourself as a serious professional. She also adds that she has learned of the importance of artists keeping their galleries stocked with strong work.

Jamie likes to get into the studio by 10 to 10:30 a.m. She has had a long time meditation practice and meditates daily before getting to work. She said that meditating helps her to achieve the level of tranquility she wants for her work. Once there, she reviews the pieces in process, adding that she likes to keep six or eight paintings going at any one time so she avoids getting too attached to a single piece. “I find that attachment is the kiss of death. I am reminded of something one of my favorite teachers, John Erickson, said. ‘Every time you go into the studio it is like chasing a greased pig.’ He is so right. Any preconceived ideas about the way you think the day might go just fly out the window.”

Jamie tries to allow herself to do what she wants in the studio. But, she said this can often be a challenge because it is hard to put all of the self-talk about what she should be doing out of her head. “Sometimes that energy represses some of the spontaneous events that allow a new direction to unfold. So, I try and push that critical parent out of the studio. Every painter knows the feeling of losing contact with linear space and time and that is the type of experience I think we are all shooting for every time we show up in front of the easel. I know I am.”

She finds that music allows her the greatest release from her internal editor. Classical music is usually the first choice of the day. She said she feels like an orchestra conductor as she moves her brush across the canvas. She is also a fanatical Van Morrison fan.

She also keeps up on exhibition opportunities by subscribing to the Utah Arts Council’s ArtOps, reading Artist of Utah’s ezine, and always checking out their main section for exhibition opportunities. She said that lately all of her work is going to galleries and she has not had paintings to submit to exhibitions. However, she hopes to enter more this year, saying that entering exhibitions was a crucial part of building her career.

Jamie’s biggest piece of advice for approaching painting and the studio everyday is a saying she heard from former University of Utah professor Paul Davis. He says, “You Start by Starting.” Jamie has continued her studies with Davis, traveling to Teasdale from time to time to sit in on the classes he teaches. “Paul is such a wonderful teacher. My vision and world expand every time I have a class with him. That is a wonderful gift to give a student.” 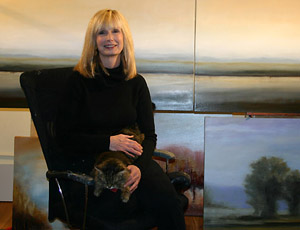 Overall, Jamie says that art making is a spiritual journey. “It is a very fast way to find out who you really are because you have to listen to yourself talk and observe your decision making process for eight to ten hours a day. You learn a lot about yourself being self employed and self motivated. Can you continue to show up when work is not going well? How long can you sit in uncomfortable feelings?” She said she solves her struggle with uncomfortable feelings by just allowing them to come up, observing them, and letting them pass.

Jamie’s ultimate goal when painting is to convey to people the joy she had when creating a piece. “I aspire to convey to the viewer the transcendent pleasure I derive from the experience of painting,” she once commented.

Okay, that one is from her artist’s statement. But, add a little southern twang and it sounds like something she could have said.

Jamie Kirkland will be exhibiting at Winterowd Fine Art 701 Canyon Road, Santa Fe, New Mexico 87501 505-438-9353 opening March 31st and will be featured in the March Issue of Southwest Arts Magazine as one of the “Artists to Watch.” Her work can be viewed on her website at www.kirklandart.com.