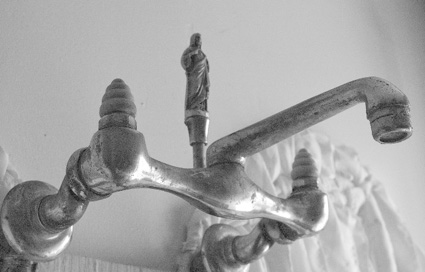 For those of you checking the site today, itching for your new 15 Bytes, you’ll have to wait a few hours longer. But here’s another little preview for you.

Kimberly Silcox has done a photographic essay of Frank McEntire’s studio space for this month’s edition of 15 Bytes. We decided to pack the page with images rather than text, but had we had more room, here’s the full text about McEntire’s space:

The 1,000 sq. ft. studio McEntire has rented for the past seven years is in the warehouse district of old Camp Kearns Airforce Base, built in 1942 to supply Army Airforce aviation operations during WWII.

The present owner of the repurposed building operates his American Tread business next door to the east, and a transportation tool inventor/truck driver rents two bays at the west end of the long building. During the day, the air smells of rubber and in the evening of onions from the near-by food processing plant.

Across the street is 3-D Art, where the fiberglass Angel Moroni statues that stand atop LDS temples around the world are fabricated and gold-leafed; and Atlas Bronze where one of McEntire’s three sons works in-between filming opportunities. An occassional train lumbers on tracks that border this secluded warehouse district where industrial buildings house small businesses that make and recycle wooden pallets and where sheet metal workers, machinists, paint and body tradesmen, cabinet makers, and others ply their craft.

"I like it here," McEntire told 15 Bytes publisher, Shawn Rossiter, during his recent visit to his studio. "What few neighbors I have in this out-of-the-way gravel road area of Kearns all work hard with little interaction and chit-chat, yet are helpful to each other when needed. In addition to my rented space are other work areas when needed — the loading dock in the back, front yard, and temporary indoor areas. And, it’s just ten minutes from home."