Lightening the Load: A New Generation Uses Humor in Art 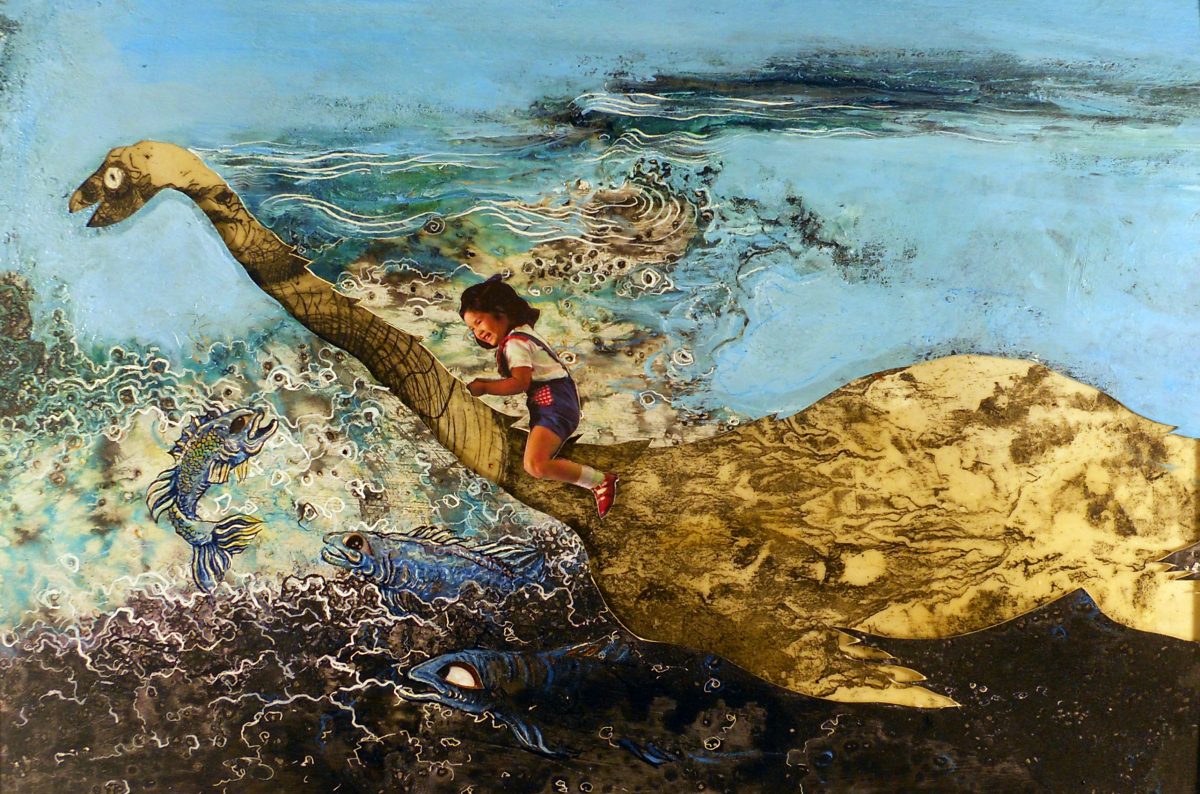 How many Contemporary artists does it take to change a lightbulb?

Four. One puts on a blindfold and throws lightbulbs against the wall; two paints burned out bulbs blue; three dons a sweater and explains to a lightbulb lying on a couch that meaningful change must come from within; four, tagged as curator, explains to visitors what it all means. The artists take turns being the curator.

Well then, how many visitors to an art gallery does it take?

Two: one to change it and one to say, “My five-year old could do better!”

Cognitive science has made great strides in understanding how the human brain works, going so far as to guess how the survival value of its operations may have favored their evolution and retention. But one ubiquitous human behavior rarely seen in the animal world continues to resist theoretical explanation: humor. No one knows why something is funny or what, exactly, a joke does for those who laugh. One thing that is clear about humor is that the worse things are, the more likely it is that someone will lighten the load with laughter. So it should come as no surprise that today’s young artists, better educated than ever before but with few job prospects, facing a potentially apocalyptic future, and this on top of the timeless disrespect of those whose only advantage was to have gotten here first, sometimes mock their predicament. Of course, in the wider world an element of scorn often drives the joke. Solemn, portentous works still crowd the galleries, many of them crying out to be taken down a peg. A welcome leavening of disrespect is evident in the work of some of our newest artists, but instead of blatant sarcasm or outright mockery, preferences run to subtler takes that foreground the natural humor in the human predicament—the kind to be found in plain sight for the artist sensitive enough to spot it, and clever enough to call proportionate attention to it.

A good place to start is with “Rejected.” Isolated in a photographic close-up (the way we see most artworks), Alex Foster’s carved maple figure looks like a conventional—if technically nostalgic—sculpture, a well-modeled human figure lying face down on the ground.|1| The title seems to say it all: in truth, aren’t we all still children inside, wishing we could fall on our faces in a rigid tantrum when we feel we have been measured and have come up short? But in the gallery, we eventually see past the defeated figure to the pedestal from which he fell. The universal reading is still valid, but shot through by one more specific, and far more painful: not the shortcoming of who we cannot help being, but rather the failure of what we strive to become.|2| Foster reveals the hidden comedy of body language, whether expressing a loss of self-esteem in “Worthless,” or in the abstract “Belonging,”|3| contrasting the complacent relaxation of the in-crowd with the striving posture of the outsider. 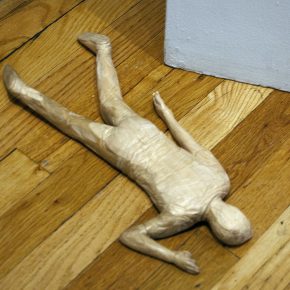 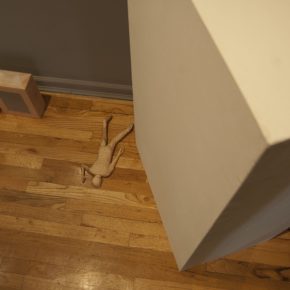 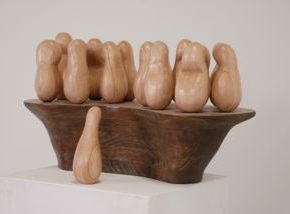 The question of body language also brings to mind Trishelle Jeffery’s significant arrangements of almost passive figures. One timeless insight into humor, which resurfaced in the current explanation: “It’s funny . . . because it’s true,” gets a fresh presentation in Jeffery’s prints, comics, and artist’s books, which initially appear as anything but funny pictures. One may ponder the clues in “I’m Going To Miss You So Much,” a print depicting a life-sized couple hugging each other good-bye.|4| If he is speaking, why do we see him from behind, other than to showcase her look over his shoulder? Is she already moving on, ironically advertising her availability to us, even as he is only beginning to feel the loss? Here the joke, if there is one, is on us: Jeffery is a memoirist, her subject her own life. Her art calculates the distance between what she hopes for and what life actually delivers, whether measured literally, in the nine-frame comic “Expectations,”|5| or encoded in the nine frames of “Spaces,”|6| each an overhead view of an individual failing to fill a distinct pictorial space. The accumulating evidence is like the buildup of a joke, the punchline coming with the realization that each space is meant for two. Her jokes have always been the quiet kind we tell ourselves, no less meaningful for their mirthlessness. 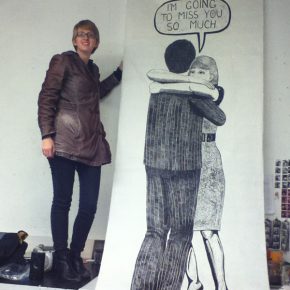 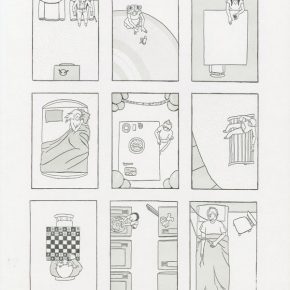 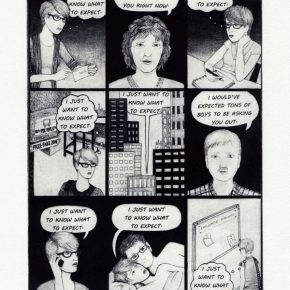 Humor has an unstable connection to expectation. Sometimes we see the joke coming, and anticipation makes the response more convulsive. At other times, complete surprise is everything. Chad Crane catches viewers off guard in narrative collages that have a fairytale quality. Part of the delight comes from dream-like situations and comedic outcomes—little girl humiliates monster,|7| school teacher forms alliance with unsocialized beast|8|—but an even more playful quality arises from the choice of materials included in the mix. Artistic renderings that elevate everything from pajamas to fish, including a woodcut Loch Ness Monster,|9| are undermined by the unexpected appearance of photographic protagonists. Historically, mixing the ‘real’ and the representational was pioneered only recently, by Picasso and Braque as part of their cubist insurrection, and human brains apparently have yet to evolve a response. 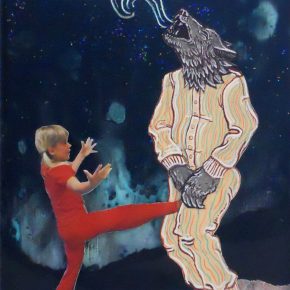 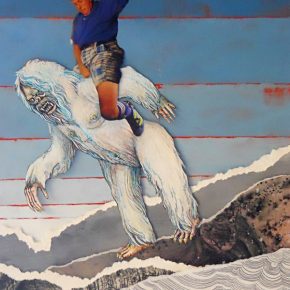 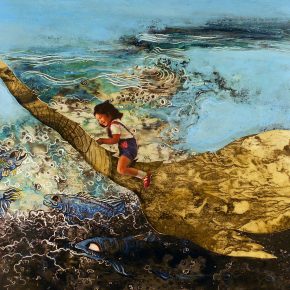 Worth keeping in mind here is that the eyes possess their own portal to consciousness: we no more need to cognitively understand something to laugh at it than we need to understand why it moves us to pity, admiration, spirituality, or rapture. Ryan Perkins demonstrates this in his Westish animations. It’s not necessary to know what’s slopping from the truncated cone that replaces the head of the slouching figure who steadies it with one of four arms as he lopes along—or anything else about this antic image. Even without seeing the original, the description “Siamese twin cowboys racing on built-in wheels, holding cigarettes and leaving behind a plume from the smokestacks that emerge from their necks” promises a smile. And while I’m curious about the boy in the mask, walking across the desert with a yo-yo, I suspect an explanation could only lessen the impact. 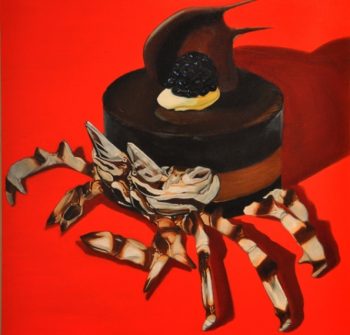 Everyday visual humor commonly dispenses with artistic merit; the funny picture is rarely balanced, refined, or in good taste. Tess Cook, whose statement speaks of “food-based puns” and “my attempt to create a food that entices and repels at the same time,” is clearly an exception. These crab cakes,|10|hybrids of actual desserts and disturbingly authentic-looking crustaceans, appear to borrow the thick, confectionary paint and strong colors of Wayne Theibaud, whose Mormon background led to his 70-year retrospective making a stop in Springville in 2008, where his interest in visually bold presentation, geometric outlines, and strong shadows—all characteristics of advertising imagery—may have come to Cook’s attention. So might Thiebaud’s justification of his populist (but not Pop) approach: “If we don’t have a sense of humor,” he told an interviewer at that time, “we lack a sense of perspective.” As hinted above, that may be the best justification, if one is needed, for humor in today’s art. Abraham Lincoln said, “If I did not laugh, I should cry.” As things go from bad to worse, perhaps laughter is the only option remaining.

Alex Foster, Trishelle Jeffery, Chad Crane and Tess Cook are all part of Artists of Utah’s 35×35 exhibition, which opens at Finch Lane Gallery Friday, March 8, 6-9 pm and runs through April 26. Ryan Perkins’ Westish animations and associated serigraphs will be at Art Access in an exhibit that opens March 15 and continues through April 13.