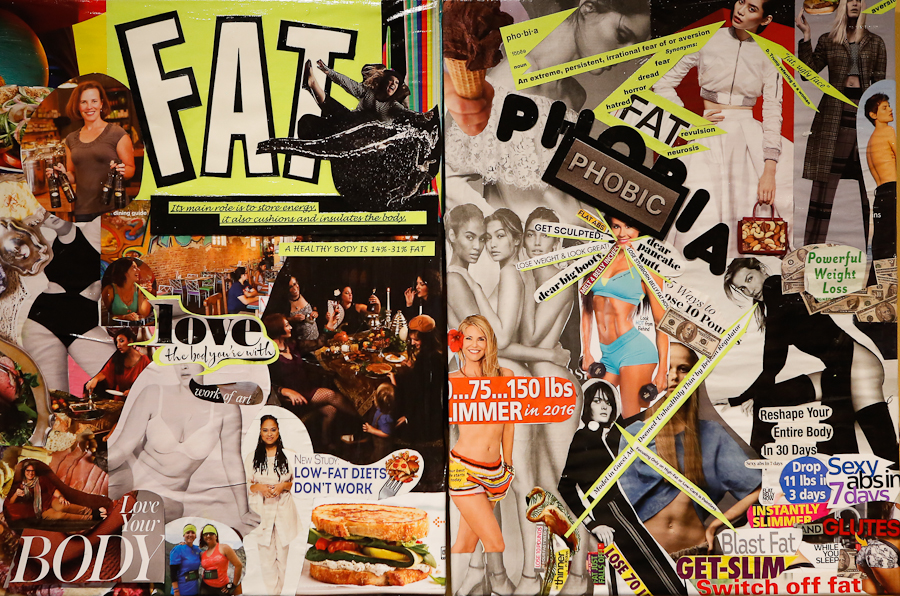 The world is awash with proverbial sayings about beauty — it’s in the eye of the beholder or only skin deep. Such notions seem at odds, however, with our society’s prescription for a monolithic kind of beauty, a preoccupation for which women across the generational spectrum have fallen victim. Art Access’ latest exhibition “Fat Phobia,” curated by artist Carol Berrey, directly confronts society’s thwarted view of femininity, addressing both its underlying harm and the beauty that exists in spite of it. The show, featuring 16 female artists, confronts this timely and often-discussed topic through a variety of artistic mediums and conceptual lenses. What results is a highly biographical view of how this issue affects artists and has the potential to affect women anywhere and everywhere.

In 2016, the critique of Western society’s obsession with a virtually unattainable standard of beauty has become commonplace. The notion that such standards of beauty are harmful is a seemingly universal contention, evidenced by endless discussion of the matter in virtually all communicative mediums. Such widespread acknowledgement of the problem, however, leads one to ask, how have we not found a solution?

A work like Jay Rieser’s “Fat Collage” presents viewers with a cacophony of popular imagery, meant to highlight the societal schizophrenia of female existence within the public sphere. Terrece Beesley’s lively watercolor paintings weave a thread, uniting past and present, revealing the darkness of traditional notions of femininity. In aptly titled works such as “Funhouse Mirror,” “She Dreamed of Breathing,” and “The Photoshop Diet,” Beesley calls attention to exclusive attention paid to corporeal existence, which comes at the exclusion of everything else. In a news release, Beesley affirms this idea stating, “Every society finds ways of torturing its women. One method of torture is demanding perfection.” 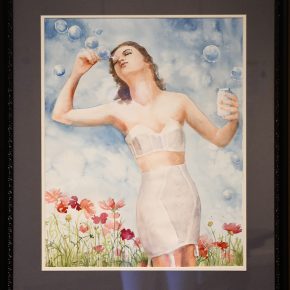 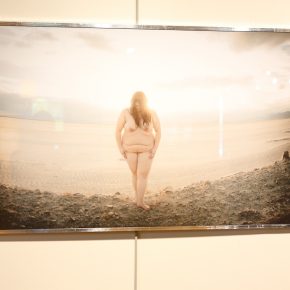 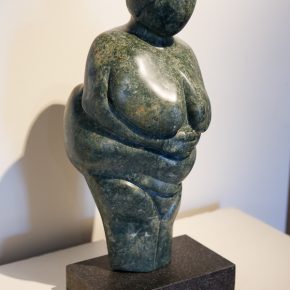 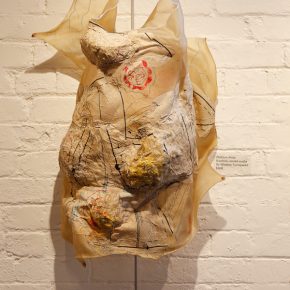 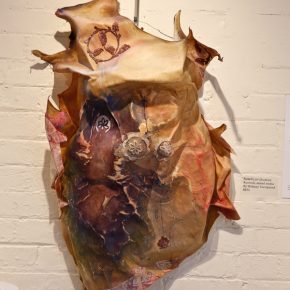 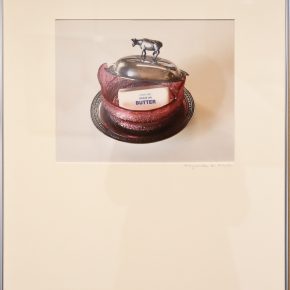 Artists who merely reiterate this societal criticism—which at this juncture is unambiguous—fail to add any relevant insights not previously explored elsewhere in the socio-cultural landscape. To the contrary, what appears to be in desperate demand is art that addresses territory hereto unexplored or, better yet, provides intelligent solutions. Just as first-wave feminism weathered critiques of essentialism, here artists must supersede the box society has enclosed around them, challenging, rather than conceding, cultural subservience.

Elsewhere in the show, artists Jonna Ramey, Marguerite H. Roberts, Zoe Rodriguez and Whitney Turnipseed adopt a more satirical, and often whimsical take on these issues and through their work trace the visual dominance of the female body within Western culture.

Unusually charming and playful, Marguerite H. Roberts’ photographs of butter and other food items reaffirm the intense scrutiny on diet and body image that disproportionally affects women. The glossy, carefully manicured images of supple butter contained in shiny colored containers is reminiscent of the Dutch vanitas tradition and Western art’s appointment of food as an ultimate metaphor of economic luxury. With recent health experts reversing the longstanding view of butter as unhealthy, these images remind us of how easily and arbitrarily societal rules of health take hold.

Mississippi artist Whitney Turnipseed provides some of the exhibition’s most interesting, albeit unexpectedly disquieting, works. Her sculptures entitled, “Suitable for Chubbies,” “The Cover Up,” “Cinch It In,” and “Problem Areas,” are visually and conceptually confrontational. The works hang and protrude outward from the wall on which they’re placed, giving the appearance of skin aprons with painted patterns and floral designs. The combination of rawhide and mixed media is effective—relaying the notion that women’s bodies are maps by which society draws, erases and reconfigures increasingly changing ideologies.

Jonna Ramey also uses the three-dimensional to critique our shortsighted visions of beauty. “Making sculpture is a way for me to examine thoughts, emotions, cultural concerns, myths and taboos,” she says of her work. Her creation of two Venus figures bearing immediate semblance to the prehistoric Venus of Willendorf, highlights this interest. In “Venus at Middle Age,” Ramey presents a satirical take on an art historical icon and emphasizes the fleeting role of culture in the grand scale of human history. After all, a Venus once considered perfect would now be unequivocally rejected as ”obese” by modern standards.

The West’s cultural obsession with the Venus figure is acknowledged powerfully in Zoe Rodriquez’s photograph “Peace.” Reminiscent of Botticelli’s “Birth of Venus,” the image captures a full-formed woman standing powerfully in front of ocean waves, her body simultaneously standing apart from and existing within the landscape. The image artfully incorporates a curved lens to intensify this effect. Rodriquez’s other works, hung on either side, exist as the most visually compelling and conceptually strong works in the exhibition. Her intense closeup shots of the female form force viewers to take pleasure in the underlying aesthetics of line and shape on their own accord. Working as experiments in visual Gestalt, these images are even more powerful in their disconnect from the bodily whole.

We are currently living in the landscape of corrosive media that unduly punishes women for failing to realize an unattainable ideal and rejects factual data for its lack of amusement and appeal. In light of these sobering facts, art has a particularly important role to play in devising visually literate consumers whose desire for intellectual and thoughtful dialogue can supersede the flagrantly false and the superficial. 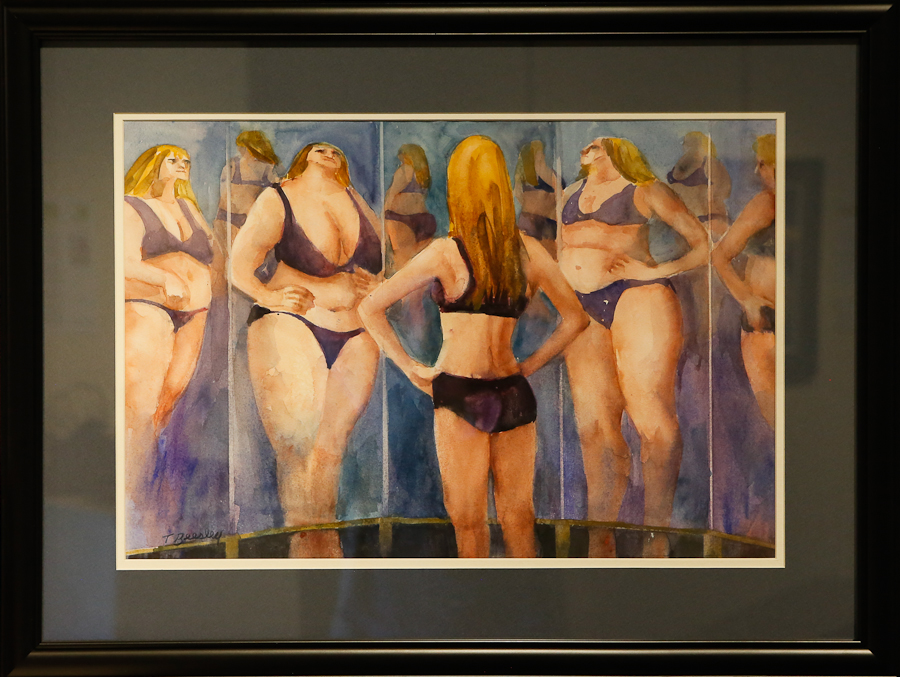