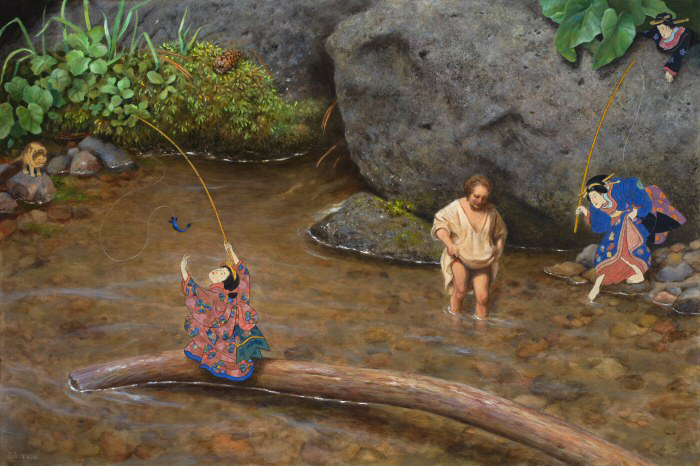 Edie Roberson
is the sort of painter who would rather not settle for one accomplishment when she can manage three, or six, or so many that viewers may never spot them all, let alone count them, even as she makes an audience feel that far from showing off, she just wants to share the fun she gets from looking closely at things and seeing how they fit together. Contemplate, for example, the postcard announcing her expansive show of current and past work in the Main Library’s gallery. Titled “Little Women at the Stream,” it looks on first viewing like a nature study, a close-up color photograph of water flowing over gravel and driftwood, bordered by stones and green plants, to which the artist has apparently glued four figures cut from art magazines. Three of them are Japanese woodblock fisherwomen, printed with black outlines delineating drapery across otherwise flat areas of color and pattern. Sharing the stream with them is Rembrandt’s wife Hendrickje, her shift hiked up to the point of compromising her modesty, painted realistically according to the style of her time—1654—but clearly made of oil. The scale matches perfectly, with the tiny reproductions just the right size to fit convincingly into the miniature landscape. But as the eye and mind come to an agreement that they will admire such accomplished collaging of three teasingly mismatched historical eras, each with its own appropriate medium and style, just then some dilatory mental organ chimes in with the belated realization that not only is none of this real in the conventional sense—that is, that it’s a picture—but the theorizing eye and brain were fooled twice. The entire scene was painted, convincingly enough to fool even professionals, by Edie Roberson. 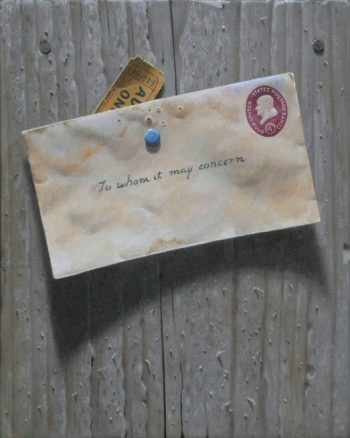 The first level of Roberson’s art is her pure skill in rendering, where she shows how discipline frees the artist’s imagination, and a convincing likeness delivers a kind of power that mere suggestions cannot approach. The hand-addressed envelope pinned to a fragment of raw siding in “To Whom It May Concern” may initially come off as a tour-de-force display of trompe-l’oeil rendering, but as the eye attempts to unravel the magic, crucial details like the price on the embossed stamp, the number of thumbtack holes, and extensive weathering penetrate one’s awareness. This isn’t just a story the viewer doesn’t know: it’s a mystery. Resisting being seen as a picture while maintaining a feeling of restraint gives this and several larger works, including “Doors,” “The Dress,” and “Through the Window Into the Past,” an emotional charge, and for some a spiritual feeling, that such mundane and anonymous subjects wouldn’t ordinarily have. 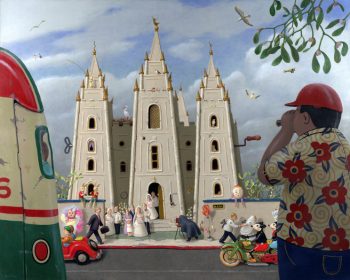 There is a theory that humor comes about when frames of reference play each other for fools, and for every somber mood Roberson depicts she offers nine more lively vistas. In case we don’t comprehend her visual advice that we “Lighten Up,” she puts it in just so many words on the most intimidating of local symbols. Her version of the Temple is a printed sheet-metal toy, complete with “STOP-GO” switch and a hand crank for turning out assembly-line weddings. All the details, from tourists with their cameras to birds nesting in the crenelations, are toys, with mold lines or joints emphasizing their bilateral symmetry, many sporting keys to wind them up. Anyone tempted to castigate the artist is likely to be flummoxed by the realism of the depiction: surely someone somewhere is making, or at least once manufactured during a Golden Age of Play, the original travesty that she has only copied. 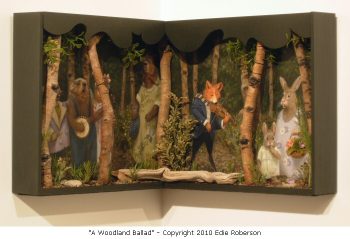 The closer some things come to their boundaries, the more obvious those limits become. Realism, at least in Edie Roberson’s hands, is not one of them. Her imitation of three-dimensional reality becomes so real in places that when it crosses over one can’t be sure just what is what. Who hasn’t looked into a mirror or a glass paperweight and ached with the desire to penetrate those illusory spaces? For Roberson, one response was to craft her images in the round, creating scale models of the open road that she saves from qualifying for the natural history museum’s collection of dusty dioramas by invoking the brush of Vincent Van Gogh. The most optically challenging, “A Woodland Ballad,” actually wraps around a corner from one wall to another, and with its mix of illusionistic painting and actual trees presents such frustration to the eye that it ends up agreeing not to care whether the space is round or flat if it will just make a choice. 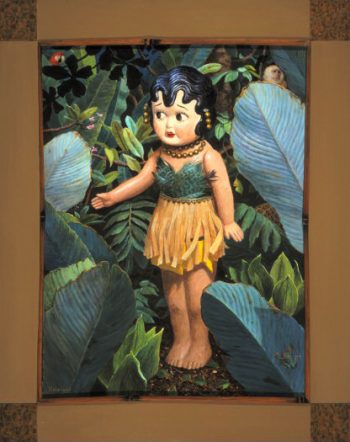 The composition of Roberson’s figures are just as important as their identities; there is more than one joke waiting for those who can tell a fragile celluloid doll, like the anxious Betty Boop in “Betty’s Jungle Walk,” from the quartet of lead sportsmen (those thin rifle barrels would always get bent) who inhabit “Hunter’s Bad Dream.” Searching the more densely populated scenes, like the two dozen or so characters riding the carousel in “And Around She Goes,” reveals delights hidden like Easter eggs: Harry Lime from the movie “The Third Man” riding the carousel, no doubt contemplating the Renaissance and the Cuckoo Clock. Over at the Temple, Humpty-Dumpty sits on the surrounding wall. Meanwhile, the disparate sources of the women in “The Ladies’ Club” and the men in “The Men’s Club” transcend their differing features to give a sense of the way our individuality feels so much greater on the inside than it looks on the outside. 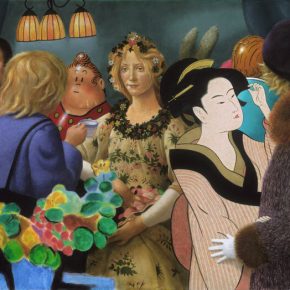 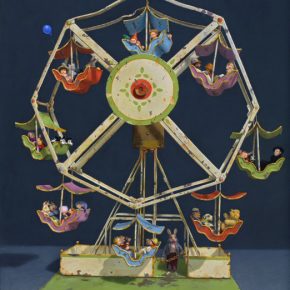 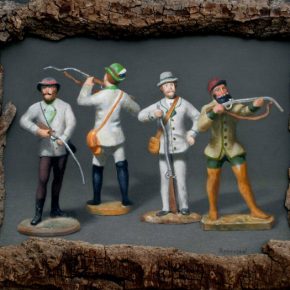 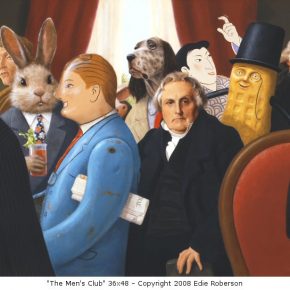 In addition to 35 paintings and painted models, there are four automata—mechanical models that come comically to life when a crank is turned. Each uses the necessarily repetitious action in some clever way to good effect: in a child’s nightmare, a doctor repeatedly stabs a needle into a boy’s arm. A fledgling bird teeters on the edge of the nest and flaps its wings without ever taking the plunge. In the nearest thing to a self-portrait a painter limns a lad who punctuates her brush strokes by sticking out his tongue. Automata, like trompe l’oeil painting, possess an irreplaceable magic that, in spite of professional advances like the audio animatronic wonders to be seen at theme parks, is discovered anew by each generation and retains a status somewhere between folk art and the dispensation granted the fool in medieval courts. 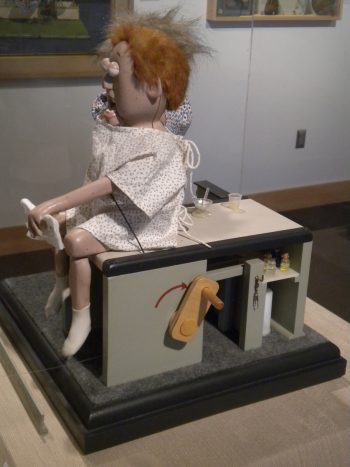 Speaking of privileged status, the chance to see what amounts to a retrospective of a popular artist whose works are mostly in private hands, combined with new works that display an undiminished vigor and wit, makes a visit to the Main Library’s fourth floor gallery an opportunity not to be missed. Not only are there nearly forty significant examples of Edie Roberson’s wide-ranging skills, styles, and moods, but on June 26th the artist will appear in person to talk to the public. July 9th may sound like plenty of time, but things get waylaid in summer—or will if it ever arrives—and while the games she plays and the toys she plays with are more permanent than our own, even Edie Roberson can’t make them last forever.

Edie Roberson: Eclectic Paintings and Automata is at The Gallery at Library Square through July 9. Talk with the artist June 26, 3 –4pm. Reception following till 5:30. For more information on the artist visit www.edieroberson.com