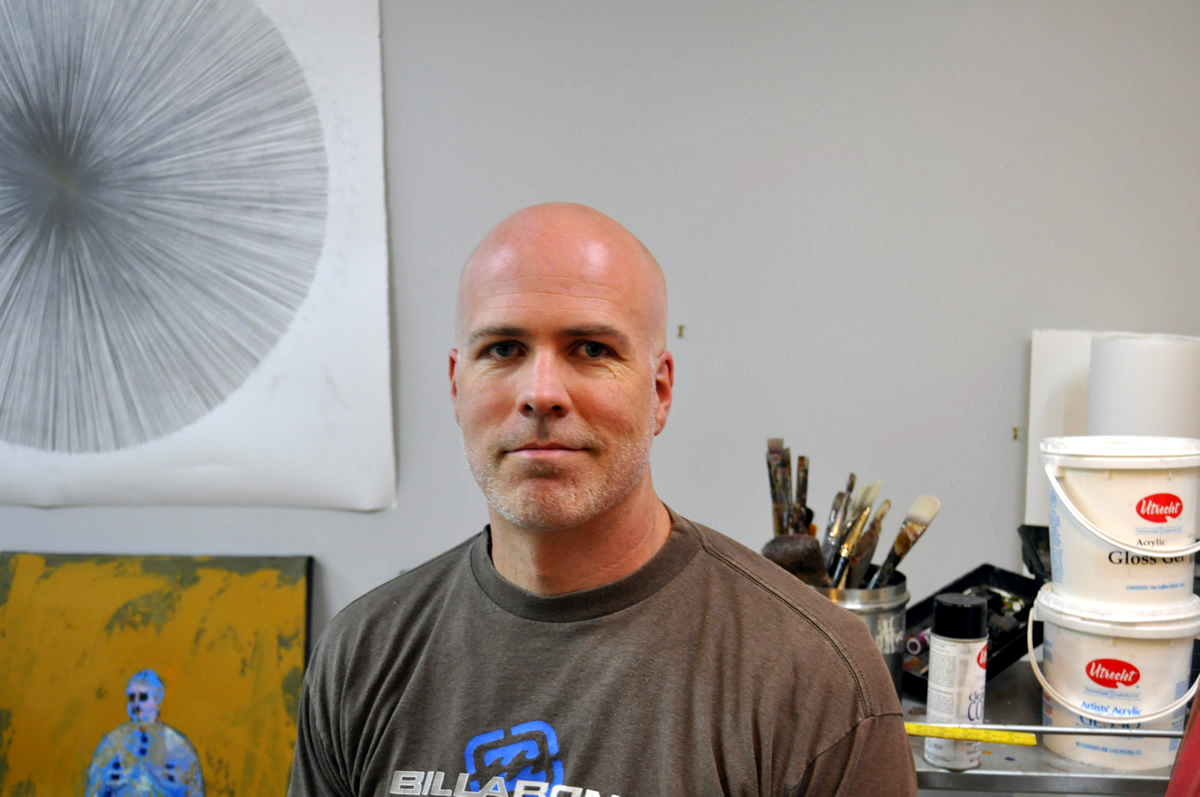 John Sproul in his studio

Every day the mass media has a new indicator to tell you in which direction the economy is headed. The only problem is — that direction seems to change every day, and in some news cycles is going in both directions at once. We don’t have any numbers to announce regarding how many pieces of art sold in Utah last month or the state of consumer confidence. But if miniature golf, a British telephone box and foster care can be considered indicators then things in Utah’s art community are looking very exciting.

The Foster Art Program — where patrons are invited to foster a work (or works) of art in their home for a specific period of time, free of charge — was launched this past month in Salt Lake City. The program is the brainchild of Salt Lake artist John Sproul, who says that experience has taught him “that there can be a lot of interest in contemporary art but that many people often feel intimidated by it, they are not comfortable with it but once they are given an idea of what it is about they become interested and some even excited about it.” The program, he hopes, will remove some of the barriers that keep people from engaging with the art. He wants to bring “the experience of contemporary art to the everyday living of those who have not had that experience and to increase the engagement of those who have.”

At the inaugural event, hosted by the Salt Lake Art Center, seven participating artists spoke about their work to an audience of about forty, while representative images were displayed on an overhead screen. After the presentation patrons were invited to submit a prioritized list of which artists’ work they would like to have in their home. Patron and artist will be put into contact with each other to select specific works to be fostered. These will remain in the foster homes for six to eight weeks. The only thing asked of the patrons is that they share with the artists and program organizers what having the works in an intimate, familiar setting has been like.

Sproul is excited about the response the program has received from artists, patrons and the art community in general. Heather Farrell agreed to host the program at the Art Center, and 337 Project director Adam Price (who has been known to moonlight as an attorney) has provided assistance. The first round of patrons were all invited guests and so far forty pieces from seven different artists have been requested.

Future rounds of the program will be open to the public. Sproul plans to grow the project slowly, adding more artists and participants each round, which he hopes will occur quarterly (click for more info). “There will also be events related to the mission of the program,” he says, “which is to create a more dynamic and engaging experience between contemporary art and the community.”

Sproul isn’t the only artist being inventive about how to bring contemporary art to the public. The Red Call Box, a new group project that will premiere later this fall, plans to display contemporary art inside an old British phone box. The idea began about two years ago when Sundance artist Jann Haworth learned of a call box in the UK being used as a local museum. It made her think of the old call box outside The Antique Shop in Salt Lake. The idea sat on her “C” list for a while until she heard the Antique Shop would be moving out. “I thought: A, the price might be low or negotiable and that it might disappear.” Artist friend Edie Roberson was excited about the idea and immediately began negotiations to buy the relic. Trent Alvey, another artist, suggested they could pay for the box by offering timeshares to artists. After a few calls, sixteen artists were quickly on board and the call box was purchased.

Buying the box was just the beginning, however. The group, which now numbers twenty and includes painters, filmmakers, writers, actors and sculptors, is busy preparing it for installation. They first moved the 1600 lb behemoth to a warehouse space in Salt Lake’s west side. After stripping off the old paint they have been waiting for most of the summer: by the time it became dry enough to work on it (without fear of rust) the nintey plus degree temperature made the iron box too hot to work on. With a scheduled debut of November, though, the group is planning to get back to work after Labor Day. They first have to weld some cracks, then they will be blasting off the rust and will begin painting it a vibrant red.

The Salt Lake City Library has offered to let the group install the box in the Main Library’s Urban Room, where four to five thousand people could walk by it every day. Haworth describes the project as “the world’s smallest Mini-Multiplex: theater/Cinema/Gallery and Museum.” In addition to the exhibits by timeshare artists, the Red Call Box will be a site for the work of Spy Hop in music and film, showing work by children, teens and young adults. Haworth says the possibilities for its use are endless: “puppet theater, one minute film fest, radio programs on an installed phone, live drama performances, a luau, Xmas exhibit and Santa, music composed in SL from plug-in ports for I-pods. We hope too to host a children’s exhibition as well as a miniature ‘all comers’ show with a purchase prize to establish our museum ‘collection.'” You’ll hear from us (and probably your neighbors) when the Red Call Box is finally installed at the library, but you can also keep up to date at their website.

The recession isn’t having much noticeable impact on the 337 Project, which seems to be charging ahead with its creative plans, the economy notwithstanding. The 337 Project is relaunching its Art Truck this fall with paid commissions by local artists Pam Bowman and Trent Call. Moreover, in the last month, the 337 Project also sent out a call for proposals for its newest event, an 18-hole, fully-playable, artist-designed miniature golf course to be opened in early 2010. Adam Price, Executive Director of the 337 Project, hopes that the exhibition “will create a wonderful synthesis of thoughtful, artistic creations tempered by whimsy and very accessible to the public at large.” The miniature golf exhibition will be, by far, the most expensive undertaking by the 337 Project to date, with over $45,000 allocated just to commission the 18 original works of art. (The deadline for miniature golf proposals is September 15 and is open to all interested Utah artists — go to www.337project.org).

Not all the news in the arts community is good, however. MoabArtWorks in Moab recently closed their doors, as did The Sego Art Center, which has been an anchor in Provo’s art scene since its inception in early 2008. A number of other venues in Provo have also diminished their presence.

But if we can apply to the art world the proverb that when one door is closed another is opened, then the closings in Provo are being balanced by openings elsewhere in the state. The 15th Street Gallery is busy putting the final touches on its space in Salt Lake’s 15th & 15th neighborhood (in a building formerly occupied by the Framery). And Wes and Ellen Clarke recently braved both a bad economy and a remote location when they opened their gallery of contemporary American art in the small town of Tropic (located east of Bryce Canyon on route 12). With the help of gallery director Irene Schack von Brockdorff, they have transformed a former restaurant into The Gallery at Clarke’s. The gallery features plein-air landscapes, abstract art, primitive pottery, sculpture and works by professional photographers. The upcoming Escalante Canyon Arts Festival (see page 10) would be a perfect time to stop in and check out the gallery.