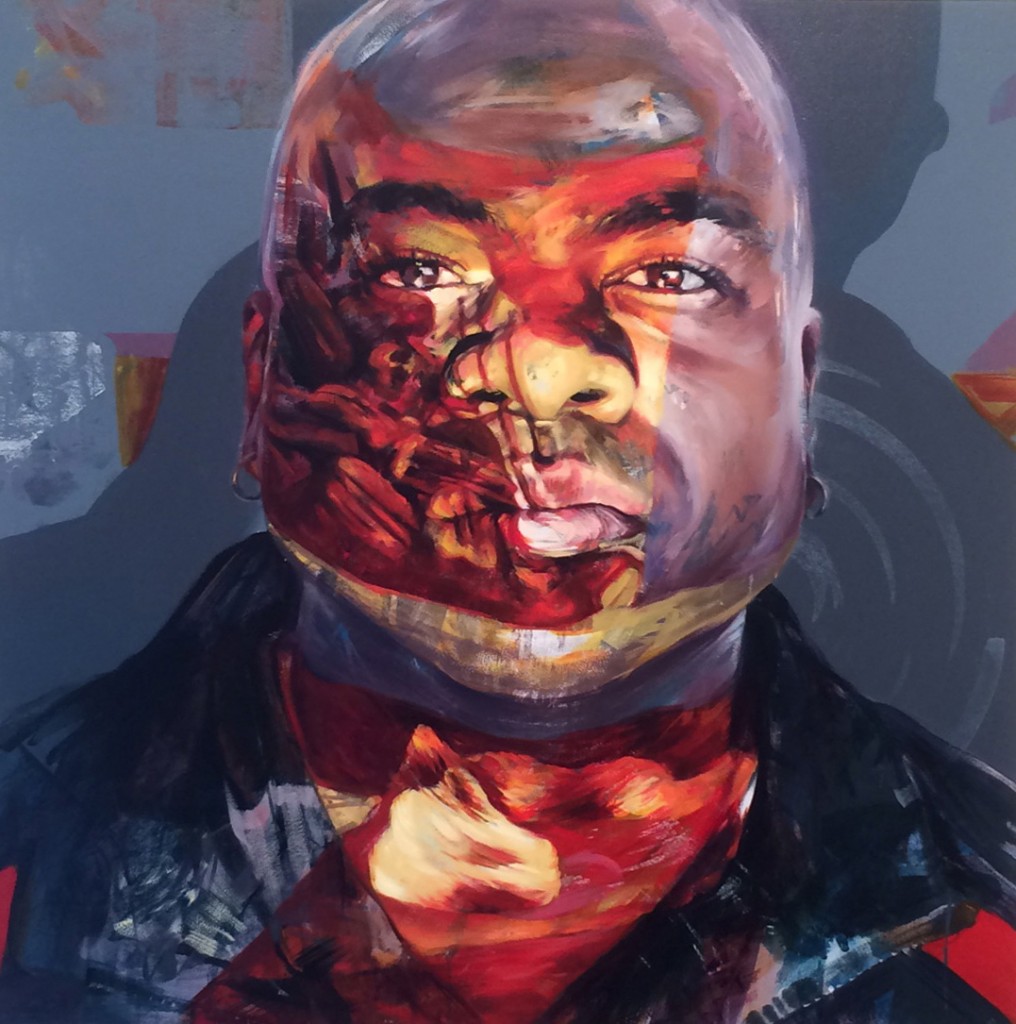 It’s not enough to paint well. Any artist, no matter how talented with pencil or brush, must also find a subject, a message for their medium. Holly Cobb, an MFA candidate at the University of Utah, has found hers in food.

Cobb’s interest is not in the food itself, its physical depiction, but in our relationship with food, with our bodies, and with the wider world. Her post-graduate works circa 2013 (she earned a BFA from Utah State University in 2011) are startling images of human/animal hybrids: factory farm animals are anthropomorphized and shown in horror-flick noir settings, while humans are zoomorphosized, with connotations either positive— as in a portrait of a female figure with the head of an owl—or negative—as in another portrait of a man turning into a cawing rooster. This work of the grotesque is executed with a realistic attention to detail even if its message is delivered with a cudgel (PETA member card wasn’t required to appreciate the work, but it couldn’t hurt). Cobb’s current body of work, in the form of her MFA exhibition at the University of Utah’s Gittins Gallery, Feeding the Hedonic Ghost, is more palatable fare, but if her approach here is more subtle and nuanced it is still charged with an undercurrent of disquiet.

In these pieces, Cobb works from a painterly tool shed that is full—wipes, scrapes, delicate brushwork; flat expanses and textured surfaces; vibrant coloring and deft modeling — she whips them all up into paintings that entice with plenty of visual sweetness. In a series of small works on paper, she has loaded up her brushes and wiped them across the surface to create little abstract confections that resemble candy: licorice, cotton candy, peppermint. They’ll give you a little insight as to why someone like van Gogh could be tempted to eat his paints: yes, he was suffering from mental illness, but as any painter who has worked with the medium will tell you, even a sane individual could mistake those gleaming pastes squeezed out of tubes for edibles.

In Cobb’s three ”phantom” portraits on display, the subjects look directly forward, filling the canvases, while their faces are transformed by swirls of pigment that resemble watery reflections (one suspects the influence of Professor John Erickson in the strong lighting and juxtaposed surfaces). In “Phantom Lick” the girl’s lips and then cheekbone appear smudged, unfinished—which begins to make sense when one steps back and notices the neck has been turned into an ice cream cone, the face becoming a couple of scoops of melting vanilla. The culinary connections are less obvious in “Phantom Silk” and “Phantom Frost,” but the paintings seem more successful because of this: without the quick (and maybe cheap) epiphany one achieves in “Phantom Lick,” the paintings maintain a seductive allure.

On the gallery’s west wall, six tall canvases (each measuring 95” x 47”) feature distressed figures in fractured settings, the canvases full of splintered forms through which the well-executed figures are more or less recognizable. In “Enter Second Circle, Enter Third Circle” (the title referring, presumably, to the circles of hell Dante reserves for the lustful and the gluttonous, respectively) a female figure seems to be protecting herself from a world that is beginning to implode. Something similar happens in “Seven Years Bad Valentine,” where images of frosting and sprinkles threaten to overcome the figure. The splintering here is not a cubist dissection of form, meant to be reassembled, but feels more like a world breaking down, exploding from a center of released tension. But the colors are bright and seductive so that the paintings attempt to both entice and repel. To judge by the lack of body fat on the woman doing a handstand surrounded by doughnuts in “Tetris Tear,” the subjects of Cobb’s paintings point not to the physical manifestations of a hedonistic culture gone obese, but rather the psychic disturbances of a society inundated with toxic seductions.

Feeding the Hedonic Ghost is Cobb’s thesis project, her request to don cap and gown, and the artist has presented the necessary scholarly backbone of her exhibit in the form of another creative enterprise: a sci-fi-inspired text that purports to be the 22nd-century documentation of the retrieved memories of an artist named Holly Cobb, working in 2015 and 2016. The document focuses on the artist’s thoughts about art and food, and the interviews she conducted with others about their relationship with food—the actual research that informed the works in Feeding the Hedonic Ghost. You’ll find it on a pedestal in one corner of the gallery. The exhibit also contains three installation components: a workout machine contraption that is hooked up to a beauty-parlor hairdryer, a vending machine that appears to sell works of art (the objects are behind waxed paper so it’s hard to tell) and a display of doughnuts assembled as if worshipping the thick column of gelatinous material in the center (licorice perhaps?). These seem ancillary, however, to Cobb’s true interest, painting. She has the kind of old-school talents of drawing and painting that would satisfy any curmudgeon from the “my-kid-could-do-that” crowd, and if this exhibit is anything to go by, she plans to do something interesting with them. 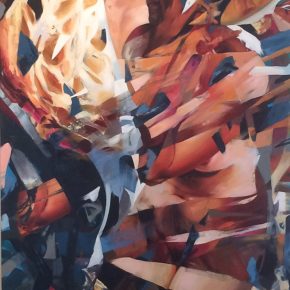 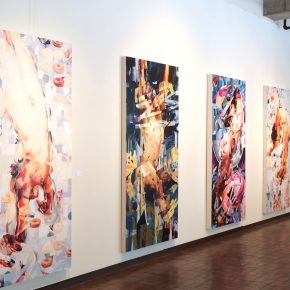 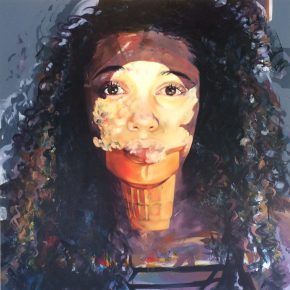 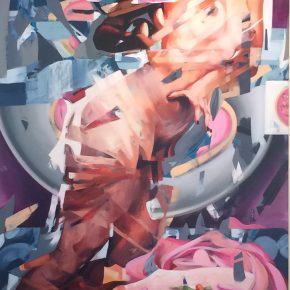 The closing reception for Holly Cobb’s “Feeding the Hedonic Ghost” will be in the University of Utah’s Gittins Gallery on Saturday, May 28, 5 – 9 pm. Concurrently, the artist will hold a studio sale — prints, buttons, drawings, mini-paintings and more – in her third-floor studio.