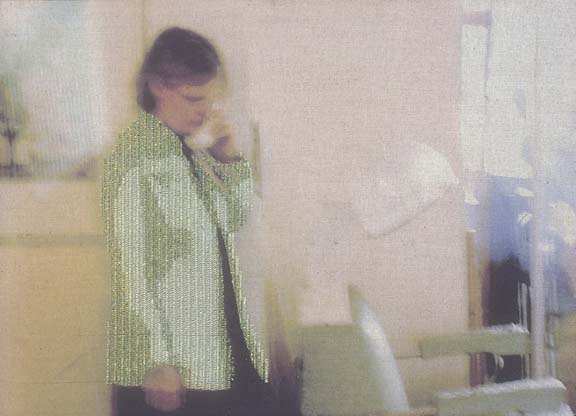 All artists have different ways of mark-making. Whether with a brush, pen, charcoal, palette knife, or stick, the artist adds a personal touch, making the work their own. For some it is what distinguishes them – sometimes it is what defines them. Van Gogh is known for fluid strokes and thick impasto. Seurat is famous for his repetitive specks that seen from the right distance create an image.

Mark-making has been an interesting progression for Downy Doxey. The most significant marks in her paintings are not paint at all. She has become well known for her large paintings of furniture that incorporate non-traditional materials as a guiding element in her work. She has used stained glass, kitchen utensils, wire hangers and children’s toys as different ways to make marks.

Doxey’s most recent work takes her fascination with materials even further. She has most recently adopted thread as her new medium – a traditionally domestic practice that she had never attempted before. Using raw linen as her canvas, she prints photographs onto the material and then embellish es different objects in the picture as she “paints” them with thread. The colorful embroidery charges her paintings with an unexpected impact as traditional technique meets modern technology. 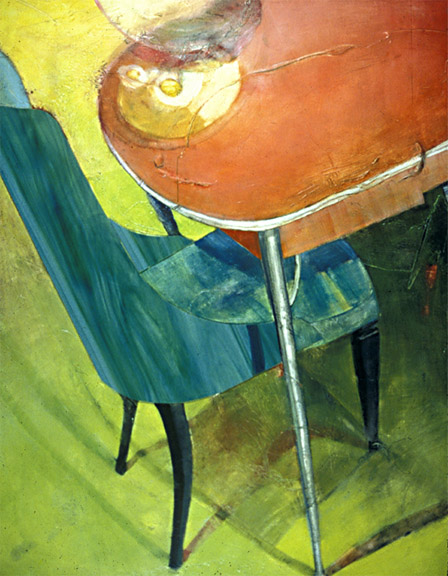 Doxey, who until recently was known professionally as Doxey-Marshall, lives in Holladay with her husband, Todd Marshall, and their four children. In 1988, she finished her B.F.A. at the University of Utah where she enjoyed trying different mediums and working to master whatever style or method she was taught. In 1996, she completed an M.F.A. at Brigham Young University where she learned to pay particular attention to creating an attractive surface. “Artists that went to the Y kind of evolved into a common look – the way they worked with the surface, the layers, the glazes and the textures,” Doxey explains. “My work became a product of that to a degree.” Although her subject matter and media have changed over the years and her mediums change, her pieces sustain an element of portraiture and the surface of her artwork remains of fundamental importance.

One of her first exhibits before graduate school was at the Egyptian Theatre in Park City. She painted 8 x 6 foot paintings of black and white antique portraits. “It seemed like all the women at school were painting on a smaller scale; for me it was more exciting to paint big.” Soon after enrolling in graduate school, she experimented with the figure by abstracting it, but found it was hard to find meaning and reason in her abstract work. Within this figurative work, Doxey began to create a space for furniture, and it wasn’t long before the figures became of lesser importance. Soon enough, the furniture took on the lead role in the paintings while the figures were phased out entirely.

When Doxey began work on her final show for her Masters degree in 1997, her fascination with painting furniture accelerated. She loved the way patterns on the fabric vibrated and played against the flat areas of a chair. She was fascinated by the way light and shadow interacted with the furniture around her. “I always had a passion for interiors. I read interior design books continually. If I could I would buy furniture all the time.”

Doxey likes to think of her chair paintings as portraits because of the complexity and personality each brings to the canvas. She began working in egg tempera and ended up painting hundreds of ten inch square furniture pieces. “I think the chairs are fun because they have a personality to them. When I paint chairs without people, they become the person in the painting. They do things in the painting.”

The chairs in her paintings were conceived from her imagination and most have a retro feel. She used a lot of photo stock, choosing spaces for the chairs, and picking patterns for them. But the form the chairs took were inspired by found objects she added to the surface. She would find a piece of stained glass and attach it to the canvas and this became part of the chair that she would paint. The qualities of the glass such as shape, texture, and color dictated how the chair would look, what shape it would take, and from which direction the viewer would see it. “The process of going through this made each painting a surprise. I wouldn’t know what I was painting until I started creating it.” In most cases, Doxey obscured the perspective so there was a sense of floating. “I had a comment from someone who hung my show at the Kimball Art Center that they were all dizzy by the time they were done hanging it.” 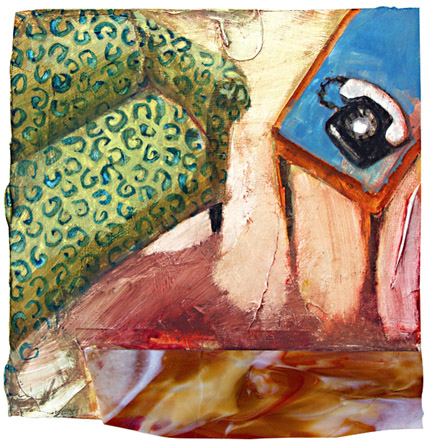 Demand was high and Doxey sold most of her furniture paintings. They have a nostalgic and collectable air about them. “People live with furniture and they have memories of the retro furniture I have; whether it’s a mother, grandmother or aunt, or something from their childhood they remember.” Doxey admits that, occasionally, a toy lying around the house would inspire her and she would get in trouble when one of her children found it attached to her painting. But using found objects was a new and exciting way of mark-making for her.

Doxey continued in this direction for quite some time, painting these pieces for shows all over the country. But last spring, she put her brush down and decided she was not going to paint her next show. “When you get to the point where it’s that hard for you to take out the paints, it’s time for a change. It was messy, it was hard and I was tired of cleaning it up.” She took this as a challenge to find a new way to paint through a new medium: embroidery. “I went and got all the different colors of thread I could find and I did my next show painting with thread. There’s a whole world of thread out there that I never knew about.” And, unlike the egg tempera, it is clean and portable, which makes it easier for a mother of four with no studio. Now she can work in bed or in the car.

Doxey’s thread “paintings” are not the usual embroidery patterns you buy at the fabric store. At first, they were simply thread and fabric. Then she found small photographs and printed them out on linen so she could highlight elements of the photograph with the thread. This evolved into working with old family photographs printed on linen, and from there, she began working with her own image in her own space. She now uses her own camera to shoot images of herself in her home, sitting on a chair, or walking across the room. Now the furniture in her artwork plays a more personal role. Being a private person, Doxey has entered new territory by including her own image in her work, but she enjoys the change.

This new work has brought an even stronger response for Doxey than her previous paintings. The innovation in material and the strikingly large scale of these works has brought her respect and recognition, including the prestigious juror’s award at the Utah Arts Council’s Statewide Annual Competition in 2004.

As long as it continues to energize her, Doxey will continue to paint with thread. “I’m going to work with the stitching for awhile, maybe try appliqué or different fabrics. What I want to nail down is what the person is wearing. It’s not as much about the patterns as it is about clothing the person. I love old fifties, sixties outfits and clothes. I don’t know what it is whether it’s a simpler time; it’s just cool and funky.”

Doxey has a couple of shows she is in the process of developing. She has participated in many gallery shows, but is now in a place where she would like to do more with art centers and museums. It’s a good place for her to be in at this point in her career. Not having the pressure of selling her work opens up levels of creativity that can only take her further and bring her more respect and acclaim. 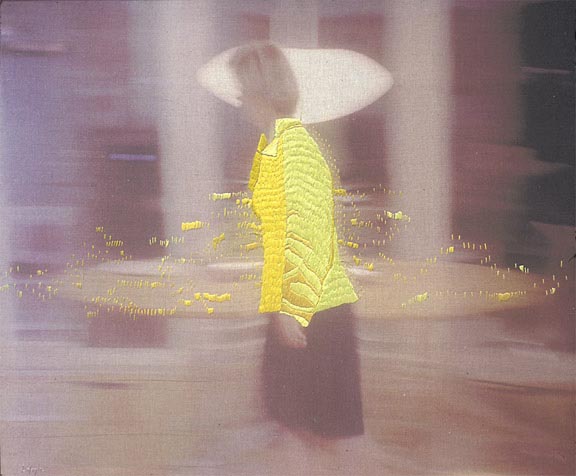 Downy Doxey will exhibit at the Avenues Library February 1 through March 12th with a public reception on February 3rd.

This article originally appeared in the February 2005 edition of 15 Bytes.