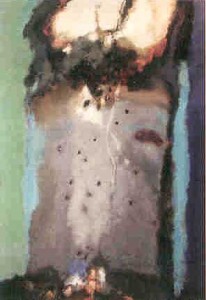 V. Douglas Snow was born in Salt Lake in 1927. He was a champion of abstract art and credited by many with bringing the Abstract Expressionist style to Utah in the 1950s. In later years his works ranged from purely abstractional works to referential interpretations of the Utah landscape, especially the Capitol Reef area near his home in Torrey.