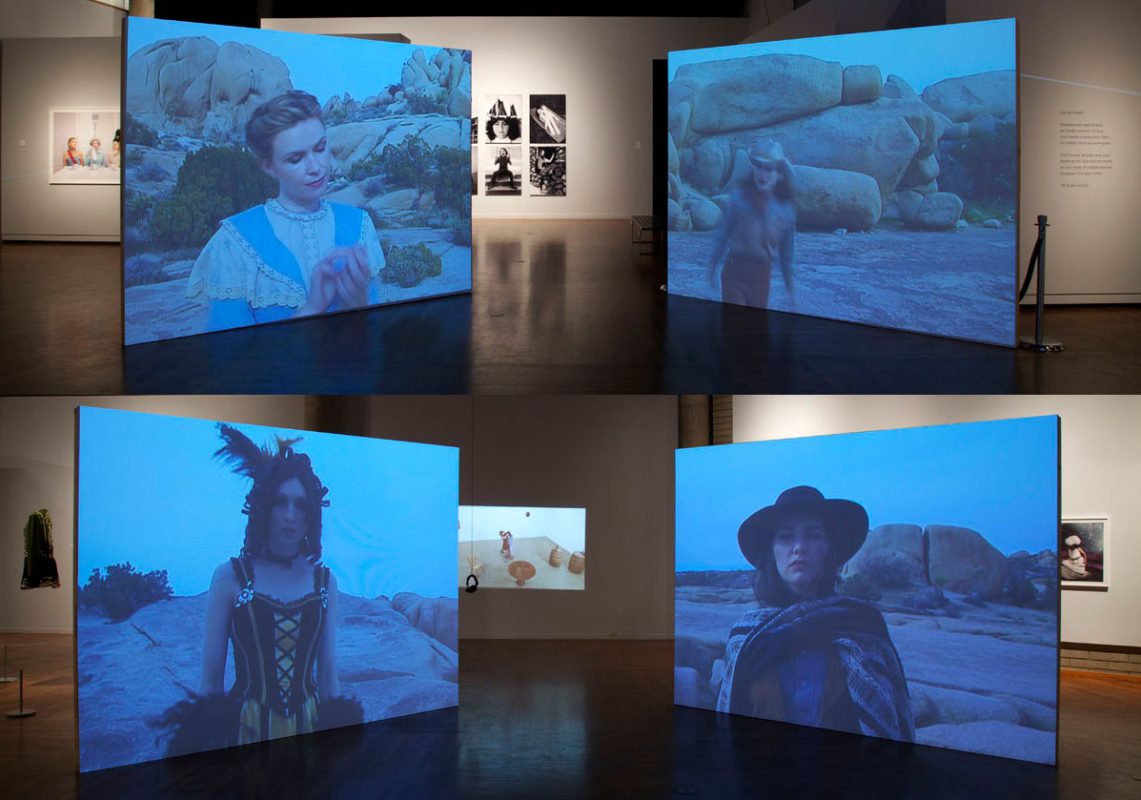 You stand in the center of four large screens. Angled to surround you, each screen offers a different perspective of a rocky desert landscape. From a single perspective of rock emerge, one by one, four women dressed in Old West, 19th-century costume: a spirited, blue-clad pioneer, a fierce cowgirl, a menacing female bandit and a sultry and commanding saloon girl. Each takes a stance and stares heavily and coldly at you. They walk around the virtual space and take a position in one of the perspectives and wait, restlessly; you do not know what for, but the mood is uneasy. The women are seemingly unaware of one another, but are alert to one thing … you. Each emerges from her position and assumes a stance front and center, and you feel a veritable moment of panic. Then, suddenly the perspectives begin to revolve, jumping from screen to screen, whirling around your perspective until, finally, the scene settles down and the women have vanished. Was it an illusion? Was it truth? You can’t be sure, but you’re glad it’s over.

Julie Orser’s inventive video installation, “Occurrence at Look out Rock,” challenges the concept of gender identity in typically-construed male and female norms of the 19th century in a male dominated “Western Frontier.” As we find ourselves face to face with these moving images, and our own conscience of gender, we encounter an uncanny challenge to norms of aesthetics. This is a common theme in the Salt Lake Art Center’s new exhibition, Doublespeak, where we find a cornucopia of prints, painting, costume sculpture, photography and video installation of various sorts. It is not until we grapple with the myriad meanings of this labyrinth of artworks that we come to terms with the individual pieces of the show and find that the whole is a symphony of significance, inspired by a 19th-century Vietnamese poetess. Hô Xuân Hu’o’ng wrote in “aural and semantic double entendres,” which means, simply, spoken poems that have plural meanings, usually the less apparent the more relevant. This is the vital clue to understanding the exhibition and enjoying the visual and cognitive play of meaning in the works of art by contemporary female artists who assert their unique voice to develop the many shades of what it means to be a woman.

Meaning can be the most challenging, the most elusive, the most evocative and the most vital element in understanding a work of art. Throughout history, philosophers, critics, historians and artists have challenged the fundamentals of meaning. Doublespeak is an artistic response, by women on behalf of women, to various cultural and social dynamics of role identity, giving voice to nuances of thinking and understanding often lost in socially established translation. 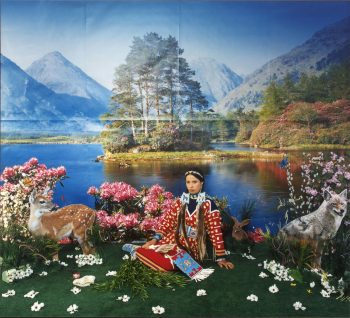 One shade of being a woman that can be misconstrued or subverted by layers of socially construed stigma is cultural identity. Artist Wendy Red Star, a Native American, presents four bold prints — lucid with double entendre. At first glance “Winter,” “Spring,” “Summer” and “Fall” seem like four catalog images for a Native American edition of Neiman Marcus; then one realizes these images are completely false. In “Spring,” for example, the background of mountains has a creased mark like some cheap stage set, the blues of the lake are far too saturated and the blossoms on the trees too pink. The animals, deer, fox and rabbit are taped cut-outs; the bushes and blossoms surrounding the Native American, props; and the grass she lounges on, Astroturf. Even the subject’s bright robe has never been worn . . . nothing in this image is authentic except her gaze, which seems to asks, “Where is my land? What happened to my land?” 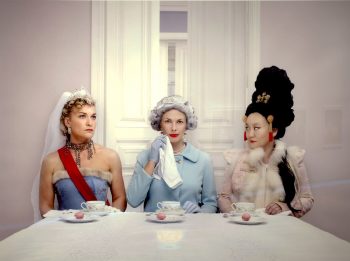 While the kitsch in Wendy Red Star’s images is undercut by the soulful gaze of her model, the suite of photographic works by The Fourth Height + Urs Bigler uses humor to dice the severe facades of the identity roles presented, and creates a visually compelling and complex double entendre. With crisp, glossy, large, archival ink-jet prints, the artists use three subjects in a series of graphic photographs that caricaturize three international stereotypes of regality: a British queen, modeled after Elizabeth II, a blond Slavic princess, and an Asian empress.|2| The three appear in seven images that have a façade of plasticity, aristocracy, and regality – the faces of nations mingling in a guarded peace. Yet emerging from behind this mask we find authentic human qualities: naiveté, vanity, pride, honor, strength, fear and ultimately aging and the passing of time. These images present a rigid external presence, yet at the core of their humanity, both virtues and frailties are very real, such as the British Queen receiving Botox injections.

A weightier shade of what it means to be a woman in history is addressed jocosely by Daniela Comani in her series of prints New Publications. This is a many-layered visual exposition on the topic of woman and gender roles in literature, another inventive and provocative evocation of the subject with 30 archival pigment prints each depicting a weathered copy of a literary classic. The books — at least most — are so well known that a casual viewer might pass by unaware of the slight changes the artist has made in the books’ covers. Look closer and we see not “Don Quixote” but “Doña Quixote,” “The Old Woman and the Sea,” “Monsieur Bovary,” “L’étrengère” and “Lord Chatterly’s Lover.” These switches are no mere novelty items, but challenges to airtight convention and tradition in the manner of visual pun and metaphor. 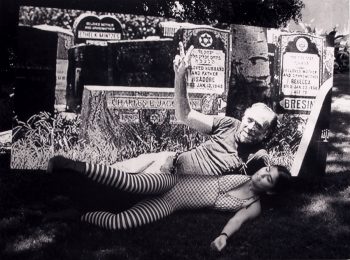 Carlee Fernandez’s Man Poster Series, from 2006, presents a more nuanced shade of the female existence: that of male and female relationships. These 10 large C-print photographs in coarse black and white picture the artist costumed in tight leggings and leotard tops, contrasting her feminine, rounded shape to images of rough and abstracted manliness. In each photo, Fernandez holds a poster of a man or male iconography, representing men she admires or has been influenced by. She kisses the images, lies beneath or next to them, uses them to cover her own face. The relationships are intimate and emphasize a stark difference between the genders.

Perhaps the most advanced and most challenging presentation of double entendres is Mary Reid Kelley’s performative expression of the many vicissitudes, frustrations, and anxieties of womanhood articulated profoundly through the complexities of semiotics and language. In her video triptych, “Queens English,” “Sadie, The Saddest Sadist,” and “You Make Me Iliad,” Kelley journeys into female consciousness. Like a James Joycian anti-narrative, the meaning in “Sadie, The Saddest Sadist” flows freely around the hinge of the verbal, visual and linguistic symbol and the free play of meaning. Kelley is embarked upon an arbitrary course yet essentially the subject has universal truths as told by this feminist perspective. Another loud voice sounds in “You Make Me Iliad,” a tightly knit semiotic epic, again with a Joycian consciousness that is liberated with phrases such as “her visceral aesthetic oozes stature,” or “Expand my windpipe, let me resonate your essence,” and other such hyperbole in the play of symbol and meaning, at times with a sense of intellectual gluttony. This work is a celebratory ode to Helen, Hera and Sappho and not to Achilles, Zeus or Homer.

Rebecca Campbell’s oil on canvas “She Made the Sky,” explores shades of hope. The title speaks of moving from one place to the next, from one existence to a better. A woman, a mother, sits on a bed of bright hues with her daughter in a surreally detached environment. They are and are not in rural America as she has fled her sheltered, cloistered life and “made the sky.” Green grass swirls hypnotically beneath her and above is a halcyon sky. The child looks back to where they have been, unsure, but she, full of hope, looks only forward not daring to look back to interrupt this reality. The beauty of this image is the balance of aesthetics and semantics, the art itself and the plurality of meaning, the double entendres that allow the viewer to consider the multiple strata of significance in the work and to consider our relationship to it. The results found here and in this exhibition can be wearily uncanny, compellingly insightful and often refreshingly enlightening. 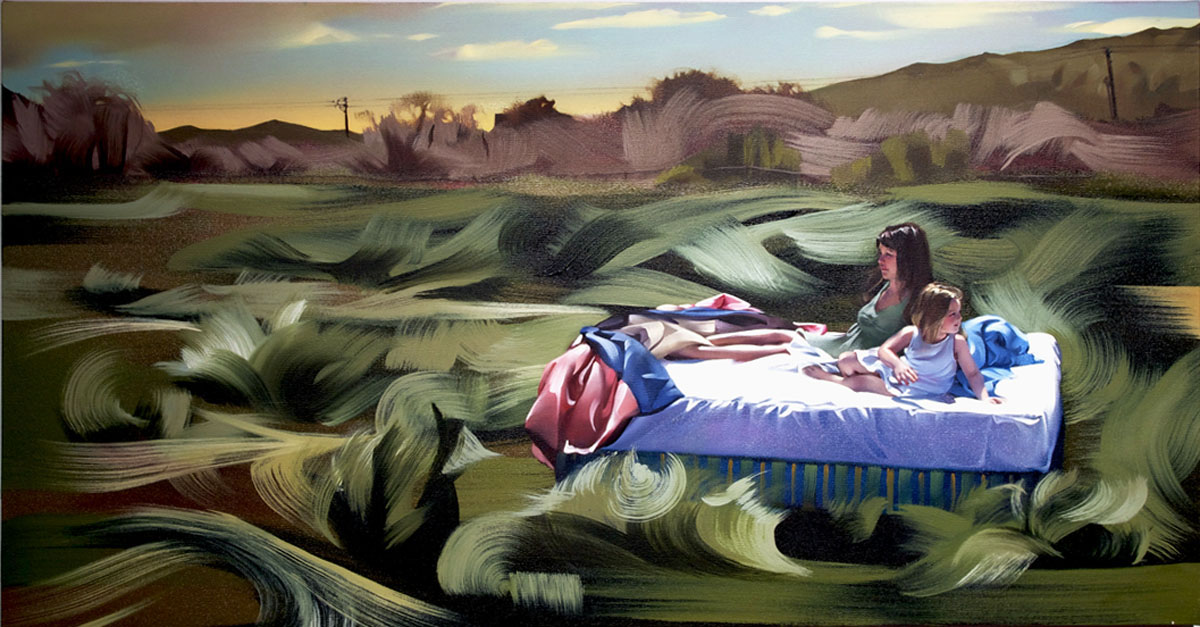 Rebecca Campbell, “She Made the Sky”

Doublespeak: Codes and Entendres by Contemporary Women Artists is at the Salt Lake Art Center through Jan. 7, 2012. In addition to the artists mentioned, the exhibit features work by Jennifer Nelson, Lisa Anne Auerbach, Julie Lequin, and Carlin Wing.