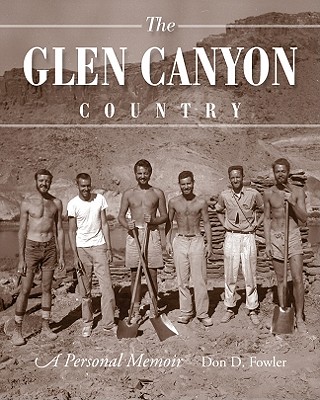 You have to watch who you tell about your trip to Lake Powell. In some circles that name is a dirty word: ever since the Glen Canyon Dam was finished in 1966 and water filled in the gorges behind it, Lake Powell has been anathema to environmentalists. My grandparents and great-grandparents were some of the first people on the lake and I’ve been going there most summers since I was young — flying, driving, and even taking the train once or twice, from the east coast to visit with relatives there. It seemed a magical place. It was only later, after I moved to Utah as an adult and began exploring the areas surrounding the lake that I realized how out of place a place it is. Don D. Fowler’s recent book The Glen Canyon Country makes this plainly evident. A massive playground that hosts millions of visitors a year, Lake Powell is a far cry from what the Glen Canyon has been historically – a unique landscape, remote, arid and mostly inaccessible, where human activity has been limited and restrained.

Fowler, whose book is a finalist this year for the Utah Book Award in Nonfiction, is a professor emeritus at the University of Nevada and author of a number of publications on the archeology and anthropology of the American Southwest.  As a young student in the late 1950s, he was part of the Glen Canyon Project, whose purpose was to survey the canyon for archaeological information prior to the construction of the dam. Fifty years later, at the end of a long and successful career, he has put together this volume, a richly detailed history on the exploration by Europeans of what he calls Glen Canyon Country.

The area under consideration includes the canyon itself, as well as surrounding parts of the Colorado Plateau: the Henry Mountains, Navajo Mountain, the Escalante area, etc.. Its “discovery” began in the 1760s, when Spanish explorers made furtive attempts to penetrate the area, looking for a way to cross the Colorado. John Fremont made another attempt in the mid nineteenth century, but real and sustained exploration only took place in the post-Civil War period, when John Wesley Powell and others traveled the Colorado River. Fowler’s book describes these explorers’ attempts to understand the area, to map it and study its geological features, and others attempts to exploit the area (building a railroad there proved impossible, and attempts to strike it rich with gold were disappointing). Eventually the place became romanticized, the rare visitor to Rainbow Bridge sharing their adventure as a precious nugget and Zane Gray popularizing its remote splendors in his novels. Early trips to visit the area for fun, pack trips and river runs, only really exploded when news came that the Glen Canyon Dam was being built.

That announcement also spurred sustained and detailed archeological investigation of the area, which though remote and dry, had been home to human activity for hundreds of years. Fowler describes this last chapter of the area’s history in detail. The Glen Canyon Country is subtitled “a personal memoir,” an editorial fudge since but for a prefatory note and a few anecdotes sprinkled along the way from the lore of Fowler’s own family, who lived in the area, Fowler’s personal experiences in Glen Canyon are not discussed until two thirds of the way into the book. The Glen Canyon Country is really a history book. In an 8 x 10 format, with text spread across two thin columns, accompanied by extensive notes and a healthy bibliography, it looks like a history book; and with its attention to names, dates and other details, as well as its long citations from source material, it reads like a history book. Even the chapters on the Glen Canyon Project in the late fifties and early sixties, when Fowler’s personal involvement provides a unique first-person perspective and the impetus to narrate an otherwise unknown history, has more the touch more of an academic than a storyteller. That touch, however, is light, the writing is clear and well-paced, and the scope of the history is both broad and well-detailed. I may not read from it the next time I sit with my children around a campfire at Lake Powell, but what I have learned from it will certainly inform my understanding of what is around (and beneath) me.

Don D. Fowler’s The Glen Canyon Country is a finalist for the 2011 Utah Book Award in Nonfiction. Winners will be announced October 5. For more information, click here.