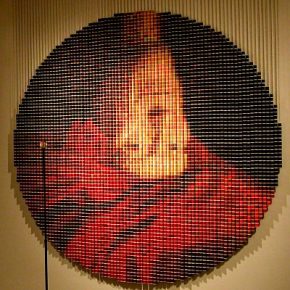 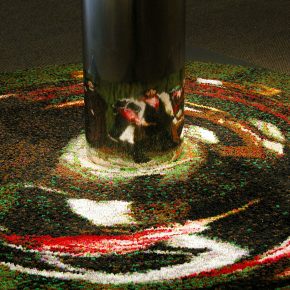 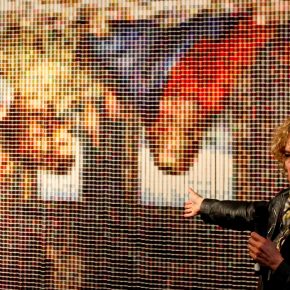 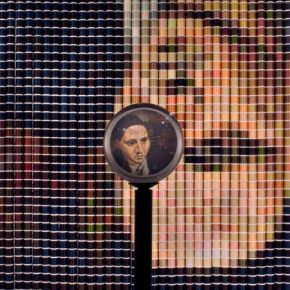 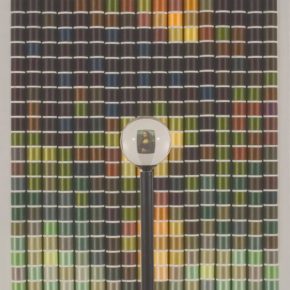 Viewed, as one so often must, from a distance in space and time—for instance by reputation and in the media rather than in person—Devorah Sperber’s phenomenally popular but largely critically ignored works of art present numerous challenges. From her studio in Woodstock, New York, she has exported dozens of closely related, often similar works, most of them executed on an institutional rather than a domestic scale, using glossy and high-tech materials, each seeming to pull off the same trick in order to make the same point, and that point falling into a chasm somewhere between incompatible realms of science and art. She’s been called—one might say dismissed as—a Postmodernist appropriator, a Feminist, and a popularizer of science, while her works are misread as gimmicks, assemblages, installations, and the lower forms of humor: puns and one-liners.

The truth, as usual, is more subtle, slippery, and complex. For while Sperber doesn’t actually belong to any of the now-exhausted camps that have cluttered the landscape of art for the last half-century, she incorporates the raveled threads of their various narratives into a strand she makes by twisting them together, thereby restoring to art the feeling of a unified purpose such as artists and their audiences shared before it disintegrated under the assault of the permanent avant garde. Sperber displays no need to shock or baffle her audience. Instead, and this may be her greatest challenge in a cynical age, what she wants to do is delight her viewers, and instead of sending us home feeling either superior or alienated, she means us to go home filled with curiosity and thinking in new ways about how seeing becomes knowing.

Threads of Perception is a traveling show that started out at the Brooklyn Museum in 2007, then visited MASSMoCA and art museums in Boise and Knoxville before arriving at the Kimball in Park City, where it will remain until the end of October. Just how many pieces are in the show depends on how they are counted, and in fact the compound sight lines and multiple interactions throughout the space are one of the unconventional features that gradually reveal just what a revolutionary gallery experience this is. All have one thing in common; each is a sculpture that can be experienced for what it is—an arrangement in space of commonplace materials selected for their brilliant colors and vivid optical presence, presented in a manufactured display that shows no signs of human craft—or alternately, read as a two-dimensional image that we will recognize in spite of its unusual context and presentation as an exemplar of human self-expression.

Sooner or later, in spite of their unlikely materials and odd orientations, one recognizes that all of Sperber’s subjects are iconic images drawn from other sources. At Park City these are paintings, though in other places characters and scenes from Star Trek show up, and in early, uncharacteristically small works the American flag appears as the pattern on a bikini. So Sperber is labeled an appropriator—appropriation being a Postmodernist ‘strategy’ meant to raise philosophical questions about originality and why we revere some copies and not others. But neither the strategy nor the questions it raises concern Sperber, who uses familiar images because of the crucial role that familiarity plays in perception. Take, for instance, arguably the most familiar image in art: the face of Mona Lisa. No matter how long one stares at the large, computer-generated curtain made of spools of thread hanging on ball chain on the wall, one will never see the details of that face. Yet when viewed through one of Sperber’s optical devices—usually either a convex mirror or an acrylic, spherical lens—not only are those details visible, but the much-remarked upon riddle of her smile, clearly visible when not looked at directly, but coquettishly hiding when looked at directly, is if anything more pronounced. We see it because we expect it.

Yes, it’s a stunt, and one Sperber repeats—though only one of several that she employs that share significance and purpose more than they do a mechanism. But it’s not just a trick, and is no more redundant in the art than it is in the way we see the art. That’s the entry point into Sperber’s vision, which is scientific but not closed off, not limited to demonstrating long established facts. This work is as alive to new discoveries as art has been through history. The paintings she chooses after much research and thought come from key moments in that history: here one sees Leonardo and Hans Holbein, who both experimented with anamorphic encoding and decoding of images, alongside Van Eyck, whose straightforward presentation of detail exhausted the possibilities of visual realism at the very moment of its invention. In a sense, art is like a tree in which each artist marks the end of a particular branch. Sperber’s experiments bring their many assumptions and impulses back to life in a kind of visual laboratory. Her method may be repetitious in the questions it asks of them, but her results are as manifold and unpredictable as the many artists who respond.

Sperber has made the point that her approach in the works that use optical devices is the opposite of, for instance, that of Chuck Close. When one enters the gallery and sees a Close portrait on the far wall, it initially seems realistic. Only as one approaches it does it break up into the abstraction that he actually painted. With Sperber, the opposite sequence takes place: a large abstraction that, depending on the individual’s past experience, may or may not suggest something, becomes clear only when seen in the mirror or through the lens. The “Ah–Ha!” moment comes when we realize that the seemingly meaningless abstraction before us contains a very familiar—in fact instantly recognizable—image. In this way, Sperber’s tableaus reproduce the fundamental experience of all abstract works and, in truth but less immediately apparent, all representational works as well. In fact, it’s the fundamental experience of sight: that what begins as a constellation of optical noise somehow gives rise to the experience of sight.

Ironically, some of the lessons that can be drawn from this work, such as how vision works in a digital age or how the larger society operates are really very trivial, bordering on the inconsequential. Yes, our eyes are made of discrete neural sensors not unlike the digital cameras in cell phones, and Sperber’s spools of thread or chenille stems reproduce these discrete pixels of visual information. But those discreet bits of information are combined in the brain to build up a picture that we perceive without those pixels, which were usually not present in the original visual field. In other words, what we see is significantly not characterized by pixels. Pixels, in fact, interfere with vision and we usually choose digital devices with resolutions fine enough and pixels concomitantly small enough that we don’t perceive them. But small pixel size in the reflected or refracted views is not what makes Sperber’s “Mona Lisa” or “The Ambassadors” visually convincing. What makes them convincing is that we already know what they look like. If I gave you a picture of my skeptical Uncle Mac, made in spools of thread to be viewed up-side-down through a spherical lens, I’m quite confident you would not say, “Oh, yes—it looks just like him!” What you’d probably say is, “What the Devil is that?” The fact is that our eyes fill in, from memory, the missing details of Lincoln’s face or the figures around the table joining in the Last Supper. And that’s the real revelation here: that our brain and eyes do not comprise a passive visual organ. Our visual system is brilliantly speculative, searching through crossed references of visual clues and memory to produce the sights we finally see.

Nor is this work ‘Feminist’ any more than it is Postmodernist, or any other ‘ist.’ It is true that textiles, including threads and carpets, may be associated with the lower status of women’s work, but today weaving connotes something altogether else. The web is the central metaphor for connection on a global scale, and for the notion, once seemingly lost but now making a comeback, that reality is something that exists outside of individual consciousness and prior to it, but that individual perceptions have a crucial role to play in developing an understanding parallel to being.

So it is that walking around the gallery, one first sees these works as they were meant to be seen: as sculptures equipped with peepholes that command a particular point of view. But then sooner or later one will notice how the mirror that presents the ‘proper’ view of Holbein’s eponymous skull also permits a rogue view, of Mona Lisa but also of ourselves. Vision is finally subjective, and subjectivity is what makes democracy possible. Unlike the works they present to us in fresh visions, Sperber’s sculptures do not allow us to ignore our reflected presence or our role in perceiving what we see. And because we like to discover ourselves in all things, we end by posing ourselves in these enchanting mirrors. “Caution—objects are closer than they appear.” Closer, more real perhaps, but no more mysterious. Finding out is made more difficult by the way we know first, and only then are able to see. Devorah Sperber reminds us that while seeing can be believing, believing is always seeing.

Devorah Sperber’s Threads of Perception is at the Kimball Art Center through October 31.