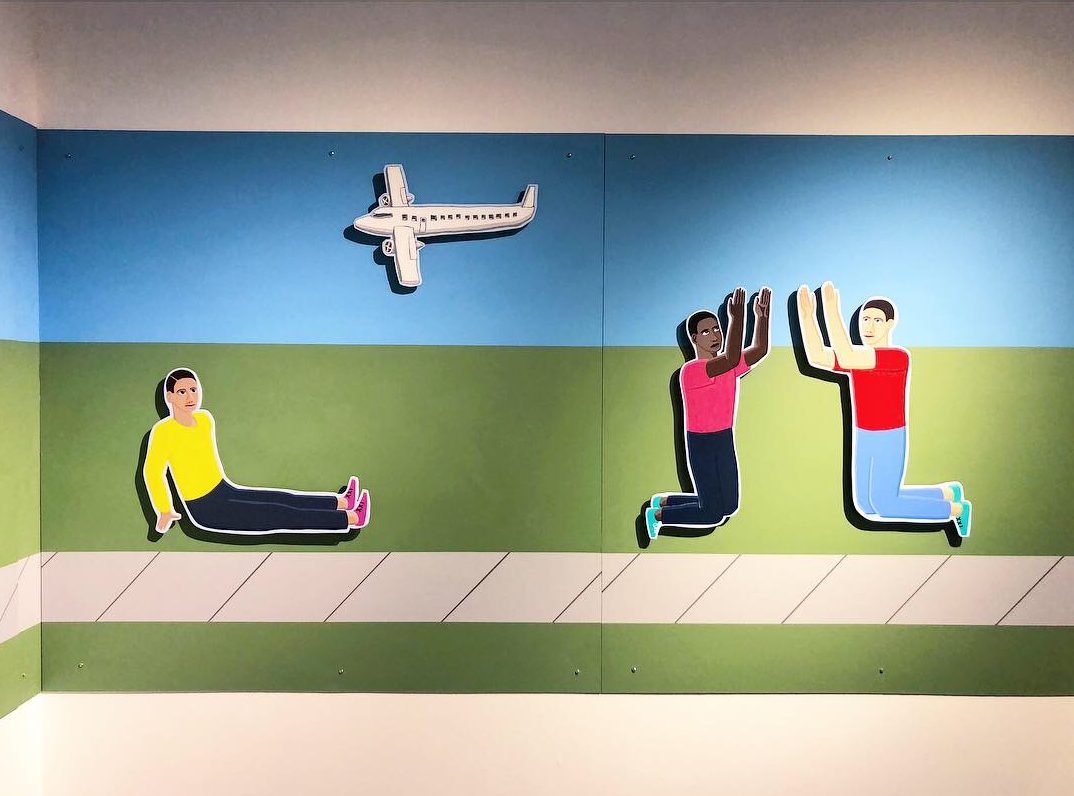 Suburbia: a term which not only refers to the outer parts of a town stereotyped for its comforting (or discomfiting) uniformity but descriptive of a way of life associated with the people who occupy its margins. Both isolation and collective community can be found in these ubiquitous spaces. At the Utah Museum of Contemporary Art, Greg Caldwell’s Neighborhood installation and the group of artists included in Shady Acres explore the duality and complexity of the American suburb.

Like outstretched arms, Caldwell’s three-dimensional mural, running along the Projects Gallery’s three walls, envelops the viewer in a visual embrace and immediately invites participation: as the viewer walks parallel to the display, he or she follows the path of the sidewalk perimeter as if existing within the work. In humble hues of blue, gray, and green that hark back to the innocence and childlike simplicity of elementary school masterpieces, Caldwell has created his “neighborhood” and populated it with stylized, flat figures protruding slightly from the mural walls. His depiction of quotidian life is framed by a crucial question articulated on the introductory panel: “What if the word Neighborhood was perceived as a title or state of being, like Sainthood, Parenthood, or Knighthood?” Understanding this concept — or rather pondering the true, active essence of the word itself — imbues the initial straightforwardness of Caldwell’s work with rich symbolism and meaning.

The occupants of Caldwell’s neighborhood come in different shades, but with similar facial features — perhaps speaking to our desire to see ourselves in those around us and inviting us to honor our kinder tendencies to find commonalities to bind us together. He has chosen a few specific objects and gestures that also correspond with the way his characters actively “neighbor.” Some are reading atop small housetop roofs, others are giving or vending produce, and a few more are seen walking on the sidewalk around the perimeter with a cup of coffee in hand. While many of us experience these activities in designated indoor spaces, Caldwell has deliberately eliminated the confines of interior community structure, the only buildings sprinkled throughout the work being small, inviting houses of similar size and shape — emphasizing the role of each individual home in the collective neighborhood and stressing the importance of inviting others into or coming out of private spaces once in a while.

The lack of public buildings seems odd at first, given the content and theme of the mural. There is no public library, and yet the idea of making connections through books and learning more about other people is an act of neighboring; there is no coffee shop, and yet meeting a friend for morning brew is an important ritual of daily life; there is no storefront, but this is where we gather ingredients that we often end up sharing and further alludes to the nourishment required to sustain a body of people. Each of these activities has been stripped of a physical space and all that remains are the people that make the place. Caldwell’s positive interpretation of suburban neighborhoods is a poignant reminder of how these sites of interaction are not just about convenience, atmosphere, and functionality but rather about facilitating opportunities to meet friends, provide services, and discover our relationships with other people, cultures, and times.

Caldwell’s inclusive and welcoming depiction of suburbia is in striking contrast to the pieces on display just down the stairs. Shady Acres, a counterpart to Neighborhood, showcases a collection of works that comment on the history of suburban areas and invite the viewer to confront the purpose of these spaces in new ways; it is certainly worth considering how this initial mindset shaped these communities on the outskirts of town and our present-day association with them.

Aili Schmeltz’s cinderblock installation “Homestead I: 120 Sq. Ft./5 Acre Claim” perfectly communicates and problematizes the traditional motivations of suburban settlers. Based on the history of her own desert property in an area formerly known as Homestead Valley, California, Schmeltz has built a 10 x 12 x 8 foot structure of gray concrete blocks in the center of the gallery space. In 1938, WWI servicemen were encouraged to move to desert land deemed worthless by the government and, according to the Small Tract Act of 1938, were promised a 5-acre parcel if they ‘proved up’ the land with a small structure. Schmeltz’s sculpture references the proportions of properties still found in this part of California and sets up a communal conundrum for the viewer. She not only creates her own homestead in gallery space, but also highlights the complicated relationship between privacy and the American Dream. Although the interior of the sculpture is visible through the holes in the cinderblocks on two corresponding sides, there is no point of entry into the space. There is something almost paranoid about the way the structure stands there, virtually shut off from the community, and stripped of any personality or clue of who the owner might be. The small “windows” allow the viewer to see only what the owner wants them to see: an empty space, which reveals nothing about the people it supposedly houses. This structure could not be more closed off from Caldwell’s inviting mural, providing a stark industrial contrast between the way communities act and function in external and internal environments.

Other artists included in Shady Acres speak to the ideas set up by Schmeltz. Whitney Bushman’s “Ribba Layout” arranges a collection of IKEA frames according to a template over a generic floor plan speaking to the same ideas of uniformity and unoriginality associated with suburban lifestyles. There is a sense of convenience in being told how to arrange things or in conforming to pre-existing norms and procedures. This idea is further highlighted by Eric Edvalson’s Images from the Expanded Object Series. His “Elixir” and “Untitled” hang side by side, the one showing a DIY version of a Slurpee and the other a box of cigarettes, both icons of 7-Eleven convenience stores and representing the accessibility of multiple unrelated products in one place. Meanwhile, Kelsey Harrison’s humorous and provocative multimedia display captures the performative gesture of moving to the outer edges of society with material objects. The initial idea behind suburbia seemed to be about having more for less, but Harrison’s hodgepodge display of everything she owns reminds us of the irrelevance of “stuff” as a symbol of wealth. Seeing everything she has out of its interior context demonstrates the absurdity of the things we still have even when we have nowhere to put them.

These two parallel exhibitions provide important interpretations of the past, present, and future state of suburban areas. The potential to thrive is simply expressed by Greg Caldwell’s “Mr. Rogers” type approach, while some of the unforeseen consequences of developing these neighborhoods are explored realistically by the artists of Shady Acres. It would seem that in order to fully embrace and make the most of suburban areas, both an idealistic and realistic understanding of these spaces will be required of its occupants — an essential empathetic outlook that is currently being facilitated by the artists of Neighborhood and Shady Acres. 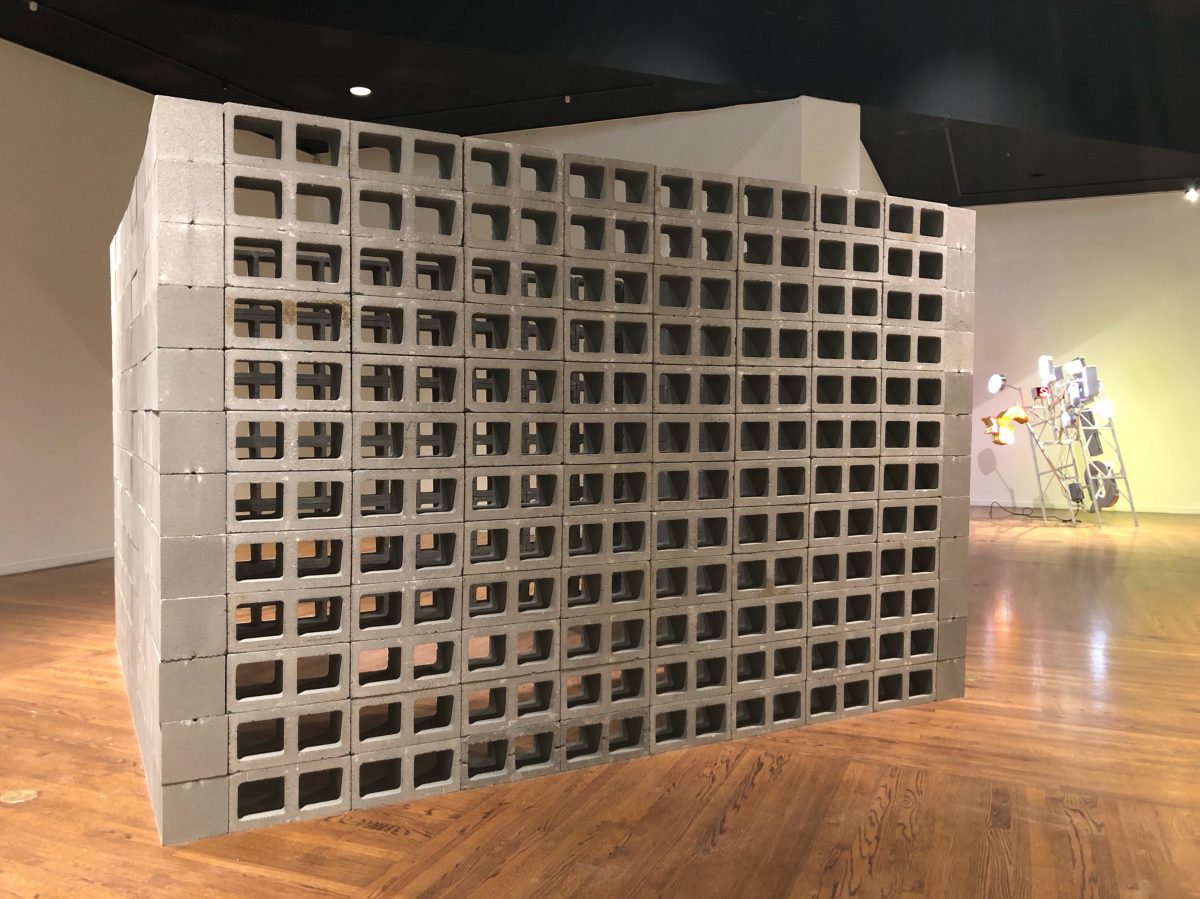 Greg Caldwell: Neighborhood, through March 16 and Shady Acres, through May 25, at Utah Museum of Contemporary Art, Salt Lake City.