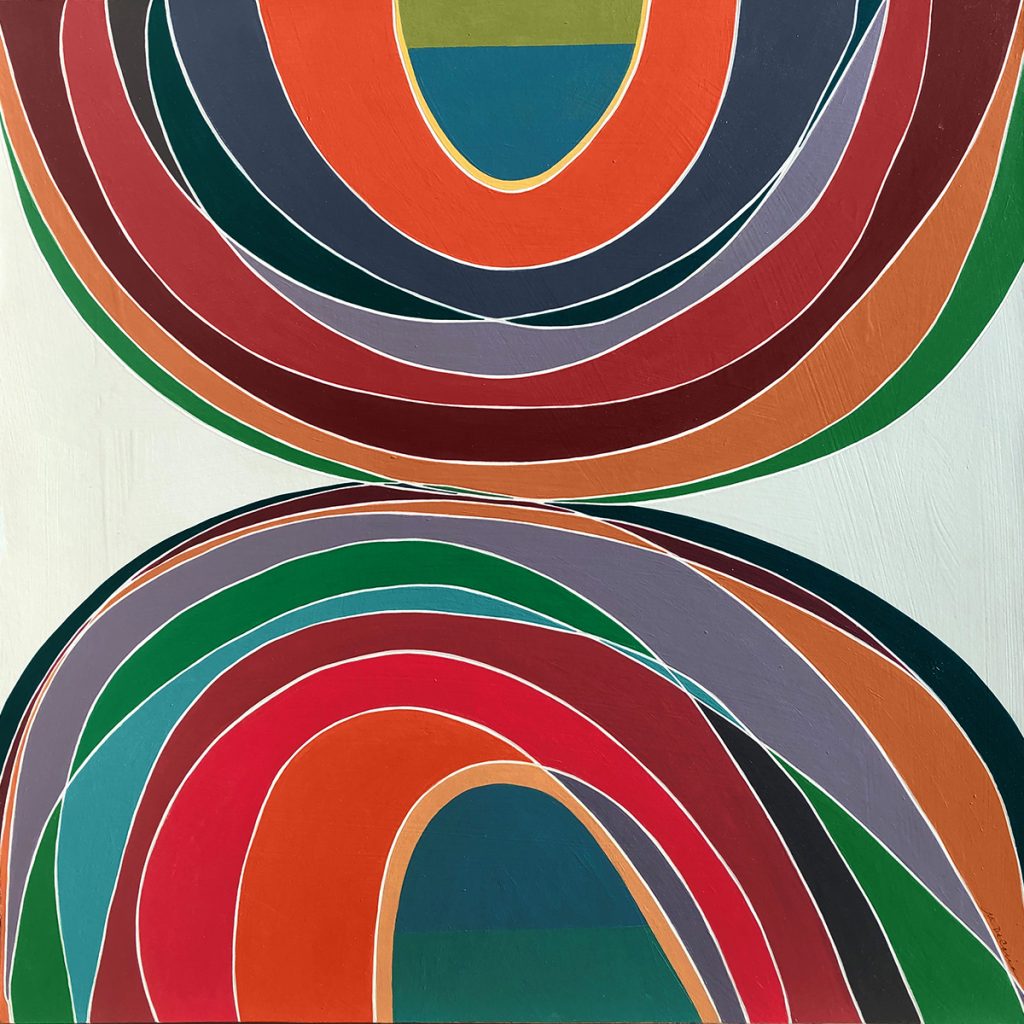 Walking into Phillips Gallery at 4 p.m., an hour before closing time and a day before Stroll and the official opening, I see Meri Ploetz DeCaria, a third of the current show in the Main Gallery, chatting on the phone — animatedly for the usually reserved gallery director — popping up only to put yet another crimson “sold” dot next to one of her whimsical works.

I (She Who Never Goes Anywhere Now) am befuddled by the crowd, not that many, really, given gallery COVID strictures, but more than anticipated -— several craning their necks upward and marveling at the purple ceiling, something co-owner Bonnie Phillips had painted as a surprise for the staff last Christmas. These orange walls are certainly making it visually pop. And the ART is FANTASTIC! Can’t wait to drink it all in.

I had seen one of DeCaria’s pieces online that I really must view live immediately. Called “Branch,” it’s a 12 x 13 x ½ inch acrylic on board that’s – just over there on the narrow north wall between the windows. And even better than I thought it would be. The work of longish oval leaves in an odd but winning palette of various shades of green and turquoise, peacock blue and ochre and a surprising dark gray all extending from well, a branch, natch, has surprising movement — look at it long enough and it even seems to breathe. A marvelous creation. 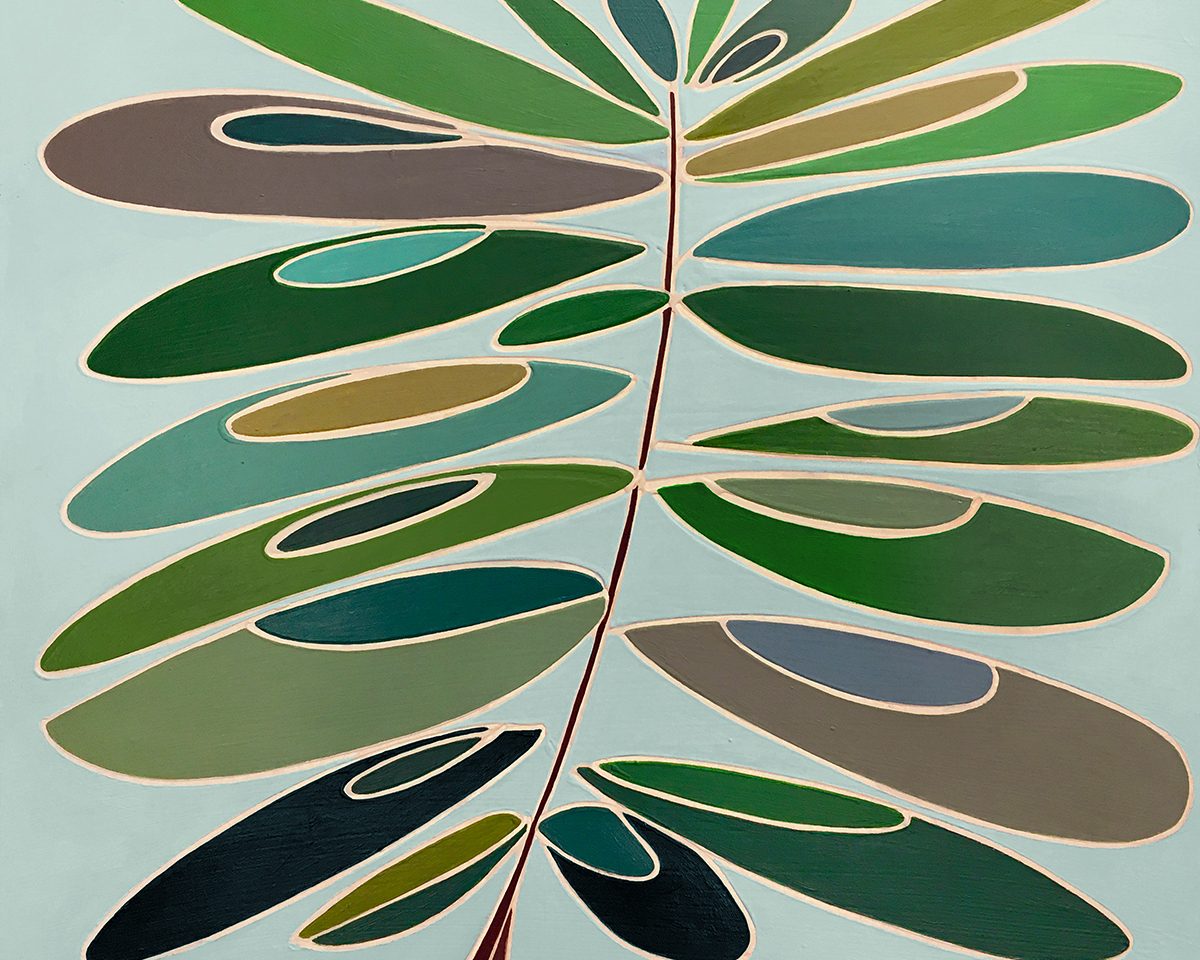 All DeCaria’s works have personality. Most exude a dash of sass. A couple wants to take one of her larger pieces off the wall to make sure it works in their living room before they purchase it. DeCaria dashes off to fill the space with something until they return it, which they must before the show opens. “Typically,” she says, “we get about three people here in a day. We had 19 people through the whole opening last time. But I don’t want to have to send people away if they can’t fit the allotted space due to COVID, so it’s all right.” I notice a lovely landscape by DeCaria over by the desk, and express surprise at the format. “Oh,” says the artist. “You have to have a landscape every now and then because a lot of people just don’t really get my other stuff.” 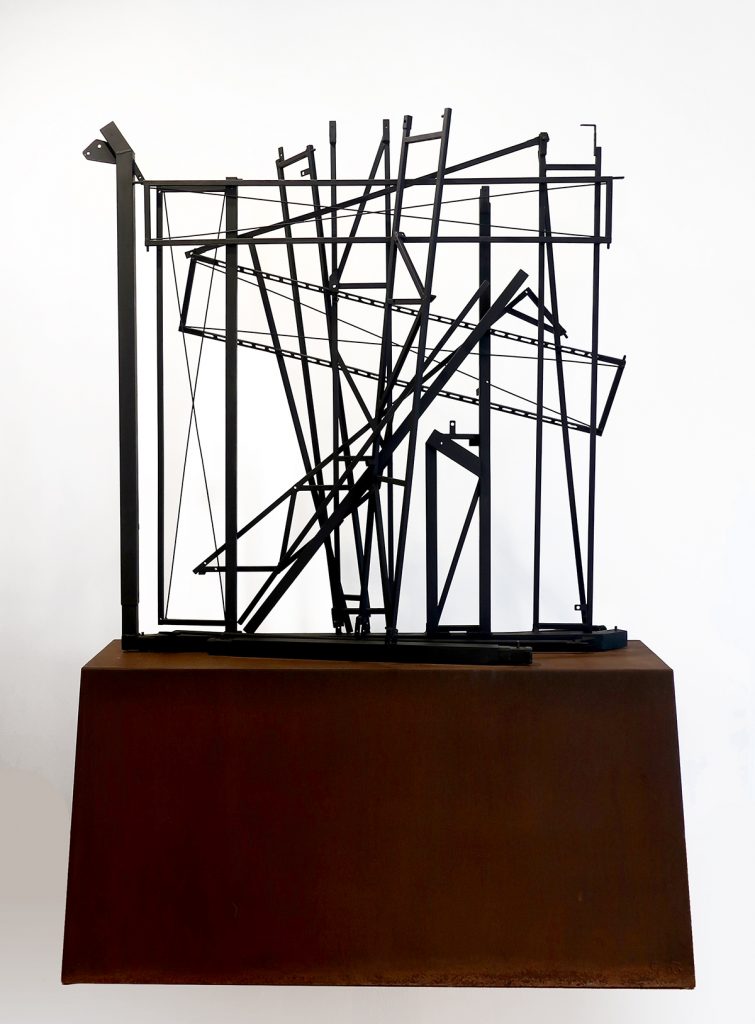 And while sculpture sometimes seems like something to be carefully eased around to get to the next wall of paintings in Phillips’ often cramped space when it’s filled with people, that isn’t the case with Cordell Taylor’s current startling, stark and stellar work. Most of it is very large black steel with windmilling arms, but a few fetching smaller, stacked burnished steel block pieces (in the 18 x 6 x 5 inch range) are tossed into the mix for those of us who just have bookcases and coffee tables for display space. It is sculpture essential to the making of this show, is fully integrated into the mix and serves to complement the hard edges and earth tones of Claudia Sisemore’s excellent large abstract and color field paintings from the ‘60s and ‘70s that contrast beautifully with DeCaria’s softer hues and more circular perimeters. One large Taylor painted steel sculpture, “Coalition,” 48 x 48 x 11.5 inch, is even magically attached to a wall, perfectly perched among the paintings.

After a quick walkthrough, I am talking to Sisemore alone (DeCaria being busy with the red dots and all) about why, the show being her idea, she had had such certainty about her paintings working so well with those of DeCaria. Sisemore’s last show at Phillips also had been a delightfully unexpected and memorable pairing – with Teresa Jordan’s cats (and maybe a sheep or two) – but  . . . and into the gallery strides artist Trent Alvey, masked and momentarily unrecognizable without her glasses, even to her bestie Sisemore, whose 83 rd birthday it is today.

Alvey immediately remarks on how much she likes “Cordell’s new work” and says how nicely it integrates with the rest of the art. Taylor will later say that he started this series, “the DeConstruction series” in the early aughts. “They are influenced and reminiscent of the World Trade Center collapse. Even though they are engineered structures they represent bringing the chaos and confusion of this incident into context. For me, making these works was a way of coping with the confusion and trying to bring some solace to the events. I found a strange beauty hidden in the random remnants of this tragedy. With this work I want to bring order and meaning to the situation.” As to how it relates to right now, the artist says: “It relates more to the chaos and confusion and the lack of direction and leadership our country and we are experiencing at this point in time.” Other large works are titled “Circus,” “Fall,” “Turmoil,” and “Chaotic Order.”

Later, I am with Alvey and standing before Sisemore’s rare, soft pastel piece – an enormous, mysterious almost-white color field work in icy blues with bright touches of red, 65 ½ x 46 ½ inches from 1978 (untitled) talking about what we see in it. I’m “seeing” a little window in crimson and wondering what’s behind it, what it would be like to look out of it and, nearby, Sisemore is giggling – she was playing around with colors, painting a feeling; there was no windowness about this painting – just color — and she’s a little bored with all that we are putting onto her work instead of just being with it in the moment. Then again, she doesn’t much care what we are seeing; she is just glad we are looking. We move on through the gallery, marveling at these many large canvases by the well-known artist and filmmaker. Just one is titled: “Trading Post,” a 45 ½ x 47 inch acrylic on canvas. 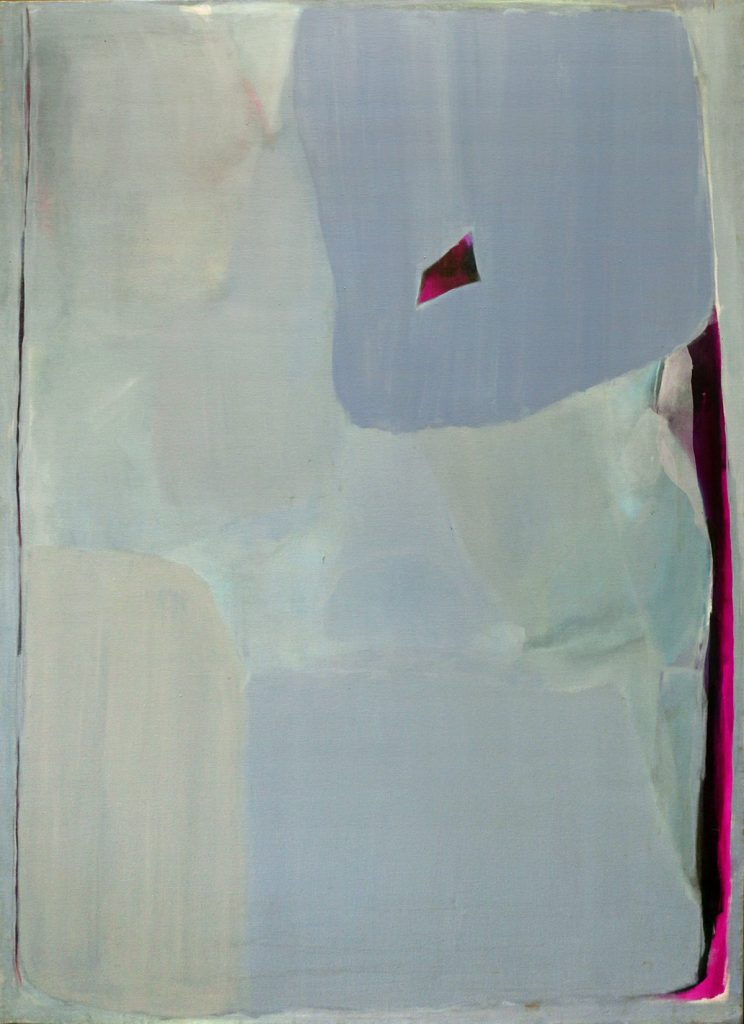 Best of show, if there is one to name here, is probably Sisemore’s untitled 1972, 54 x 54 inch acrylic on canvas, a captivating color field work in umbers and siennas with a small, difficult red line that couldn’t, we all agree, have been done easily in oil. Sisemore is reminiscing about the time that she says Lee Deffebach asked her to show her how to do color field work: “She borrowed a few of mine and then she did the Alph show,” Deffebach’s Park City exhibition in 1977 at the Kimball. The two artists shared a couple of shows and several tricks back in the day. “Even [conservative portrait painter] Alvin Gittins liked my color field work, which shocked me,” recalls Sisemore.

I do wish my on-the-mend broken leg could have made it downstairs to the Dibble Gallery where Elise Zoller is showing her detailed works in oil on linen mounted on birch of buildings that enchanted her in charming small towns such as Paxton, Fairview, Veyo, Kamas, Coalville, Cedar City, Panguitch, and Marysvale. She wrote a short note by each painting about the townsperson who told her a story that inspired the work – a rodeo queen, a dry cleaner. . .

It’s a kickass show not to be missed, even if you just look through the big “picture” window. Be sure to look up, though, and catch a glimpse of that purple ceiling. 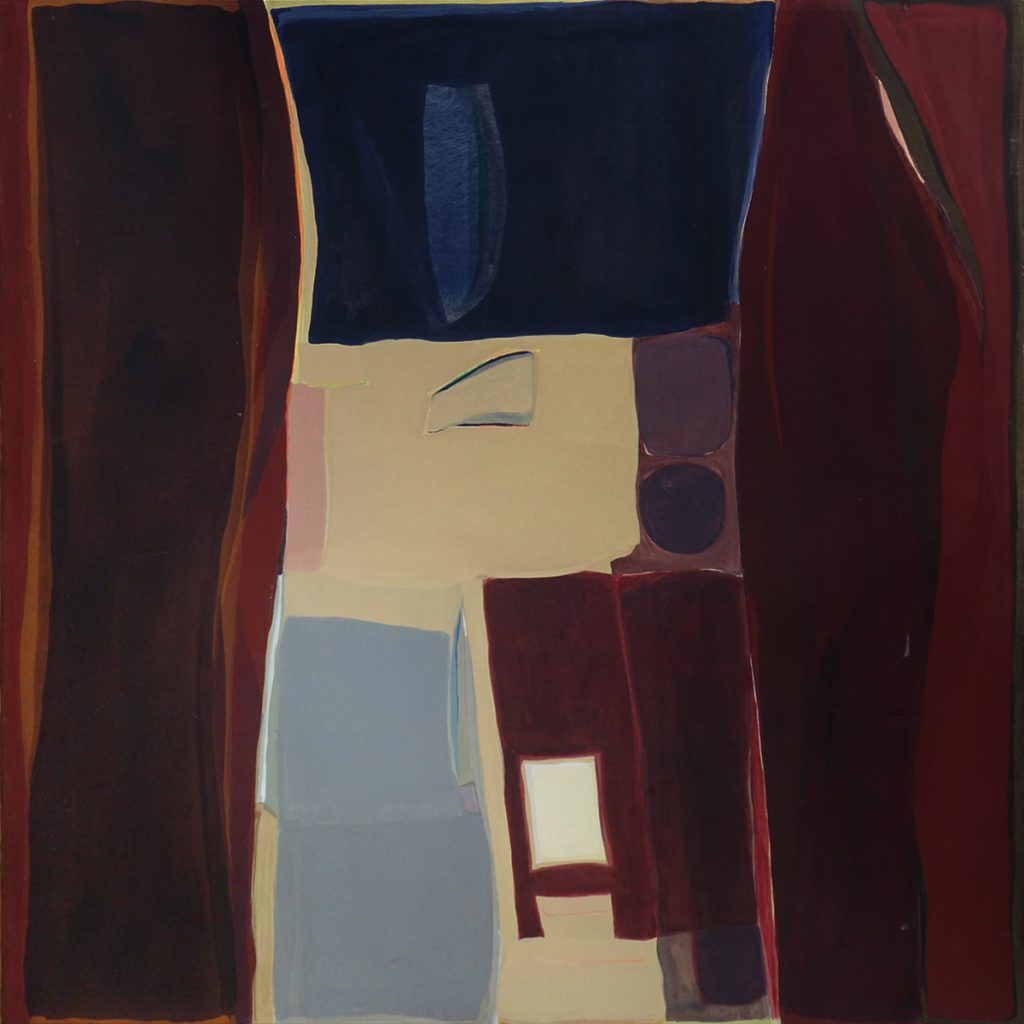