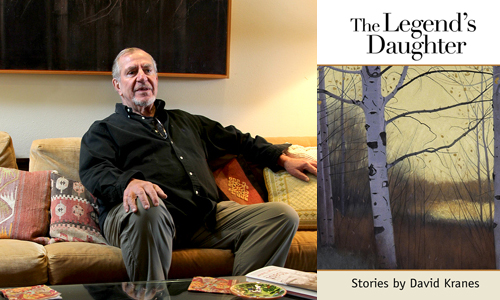 As I read one of the stories about halfway through David Kranes’ new collection, The Legend’s Daughter, I became lost in the language: the tangents, the circle-rounds, the free-form understated bombast. I started to wonder if I might need whiskey flowing in my veins to understand the narrative, to tap into some muddy logic that I was missing for trying to read the story straight. Then, and it was a relief—for it was too late and I was in no mood to crack a cap and splash corn bourbon on the rocks—the narrator of his own accord admitted to speaking in tongues. So I was off the hook, at least for that reading.

I picked up the book the next day, started over with the difficult glossolalia story, and I understood. Fully. Yet I’d had no conversion in the night. No visitation. No holy-rolling and Angel of Death mushroom-touch on the floor of the First Church of Idaho.

You ask: What is the First Church of Idaho? I say: In the beginning…and mention my mother’s hand, my ankles, my father’s corrupting restlessness. I say I enter any building under a cross. I remember tell me every time. I use the word intersection.

And at “intersection” is where many of the characters in Kranes’ fine stories find themselves. Consider: two men from the East, thigh-deep, umbilically-joined in the Salmon River awash with loss and love muddied with edifying sexual ambiguity; the title character mapping a course from living flesh to find her famous father over the roads of Idaho, setting out for “Beyond”; a mother on a cross-country odyssey in a clanking second-hand car, pausing a half-mile past the Sunbeam Springs Café to consider the consequence of going back to meet the man she’s never met who might be her son’s new father.

There are so many concurrent themes in these stories. A great many ways to hang your fishing hat on what Kranes is getting at. Maybe there is no “getting at” with these stories. They can be taken as a kayak ride down an uncertain river like one character does repeatedly. Who knows what might come around the bend? Certainly there are misfit relationships and a drought of understanding in these stories. These themes are the bedrock of the collection. But I’ll focus on whiskey—since I’m already drifting down that stream in this review–whiskey, the pull of Idaho, and the gravity of river banks.

The folks in Kranes’ stories are drawn to Idaho like the coarse, dark, metal shavings in a Wooly Willy magnetic drawing pad I played at on a family vacation driving north from Utah decades past. Kranes’ figures arrive on the frying pan of the state in clumps, drooping-castoffs, seeking shape. They show up from all points, west, south. East. Mostly east. Some come straight–poof!–from the show stage of the Monte Carlo casino in Las Vegas. It isn’t as though they have come of their own will. There is some greater power at work. Some magnetic stylus picking them up here, there, dragging them flawed cross-country to the Sawtooth Mountains, the Shoshone Ice Caves, the Payette River. Stanley. Boise.

Kranes, a highly-heralded and accomplished playwright, holds the stylus over his unruly characters, each with their varied attributes, and allows them to reach and gather their own filaments and settle there in Idaho…or recognize their deficiencies and flee. He does this mostly through dialogue. Rich. Raw. Real words spoken with no hesitation from vulnerable people:

C’mere you big ol’ conservationalist!” She said. She wrapped around him. “Give me a hug,” she said. “Give me a big, long hug.”

There is often a calm clarity in these stories. A sense of what may become, but rarely a conclusion. Like the Wooly Willy tableaux on my lap cutting north toward Burley all those years ago, many of the people in these stories seem to be tenuously held in place, and only a quick turn or tap on the brakes would spread them back to the edges. It is, though, as if Kranes would have no edges.

This is a difficult world in which to find, finally, love. So draw impossibly close. See as much you’re able. And, if you can, find a story without demarcation.

There is a measured control at work drawing these stories. A master’s creative hold. Forgive the pun, but let’s call it the “Maker’s Mark.” It’s the whiskey that passes the lips of so many men in bars, in restaurant dining rooms, by campfires on the banks of rivers. Sure, in one of these stories, there’s the Scottish variant that fuels the parting flames between father and daughter at odds between art and “milk money,” but it is Maker’s Mark, good American artisan bourbon that spills onto the pages and stains the sentences, paragraphs. The margins.

I believe David Kranes meant for me to have that difficult first pass of the story “Angel of Death.” He means for a certain level of misunderstanding to be a constant stimulating rub for the reader and also the people who populate these stories. They speak in starts and fits. As if they are searching for one good way to impart a feeling that cannot be put into words:

Into the shoulder of his Patagonia vest, she said, “Here are some more words from William Faulkner. Now listen up. Gratitude is a quality similar to electricity: it must be produced and discharged and used up to exist at all.”

“I’m not sure I understand that,” said Blake.

In the end, the misunderstood–the women and men, fathers, mothers, their sons and daughters, all those seeking to express themselves–they who want to understand and to be understood always return to the water. They come to the lake, or to the river where the flow sings a note ancient and pure, a song distilled over the rocks like moonshine and poured onto the pages of this book. A book of humanity and mortality from the panhandle that is like that swallowed whiskey:

When it comes—tastes just as I’d hoped—like a fist to the mouth, coating my teeth, ripping at the back of my throat.