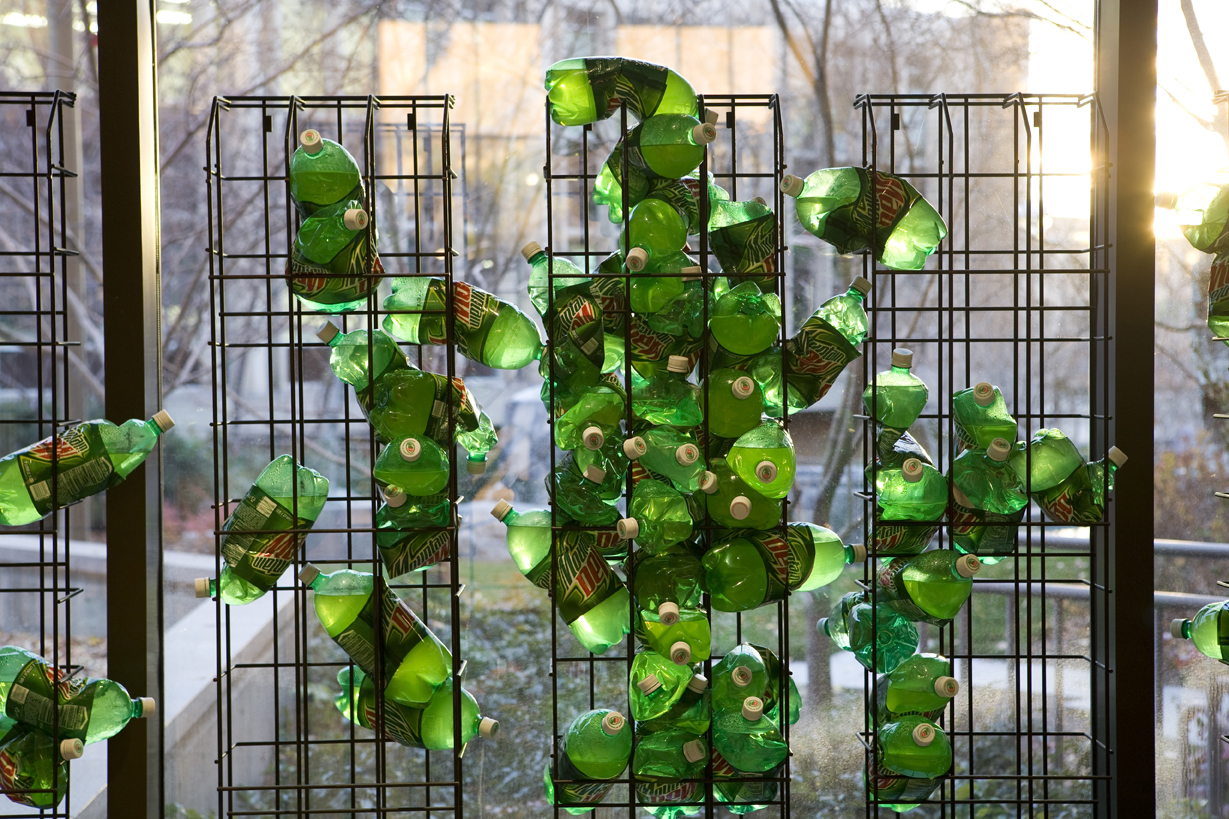 Where other artists study the qualities of clay and paint, Dan Steinhilber spends his time in the local home supply store, exploring the properties and artistic possibilities of polyurethanes and PVC piping. As can be seen at the exhibit of his works currently at the Brigham Young University Museum of Art, this Washington D.C.-based artist uses everyday materials to make poetry out of plastic by evoking the natural with the man-made.

In his works, which reside on a slippery scale of installation-sculpture-painting, Steinhilber employs store-bought materials, pushing but not altering their forms, so that at the end of an exhibit most of his materials can either be recycled or returned to the store. The materials are crass and mundane, but Steinhilber employs them with the sensitivity of a nature poet, concentrating on the unique qualities of the man-made materials at his disposal to search after a mimetic art that engages the natural world. In his hands, PVC pipe becomes a spider web, packing peanuts the crashing surf, and fluorescent bulbs a shimmering cascade of water.

These works, all untitled, were created specifically for the BYU exhibit and were installed by the artist in the month of November. Some are tagged with two dates, an earlier date for the first realization of an idea — such as suspending dry cleaning hangers from each other to create a floating sculpture — and 2008 for its current incarnation. Though the exhibition takes place on the museum’s lower level, in rooms designed specifically for this exhibit, Steinhilber’s works spread across other available spaces in the museum like a natural growth. The recent ideation of the hanger sculpture hangs suspended above the front entrance; a series of bent and bruised 2-liter Mountain Dew bottles, resembling an infestation of snails, occupy space at the south windows. A related work stands inconspicuously at the gift-shop entrance, fooling patrons who try to purchase the products, oblivious to the fact that a bottle of (caffeine-free) Coca-Cola is filled with orange soda and the Sprite is caramel colored. 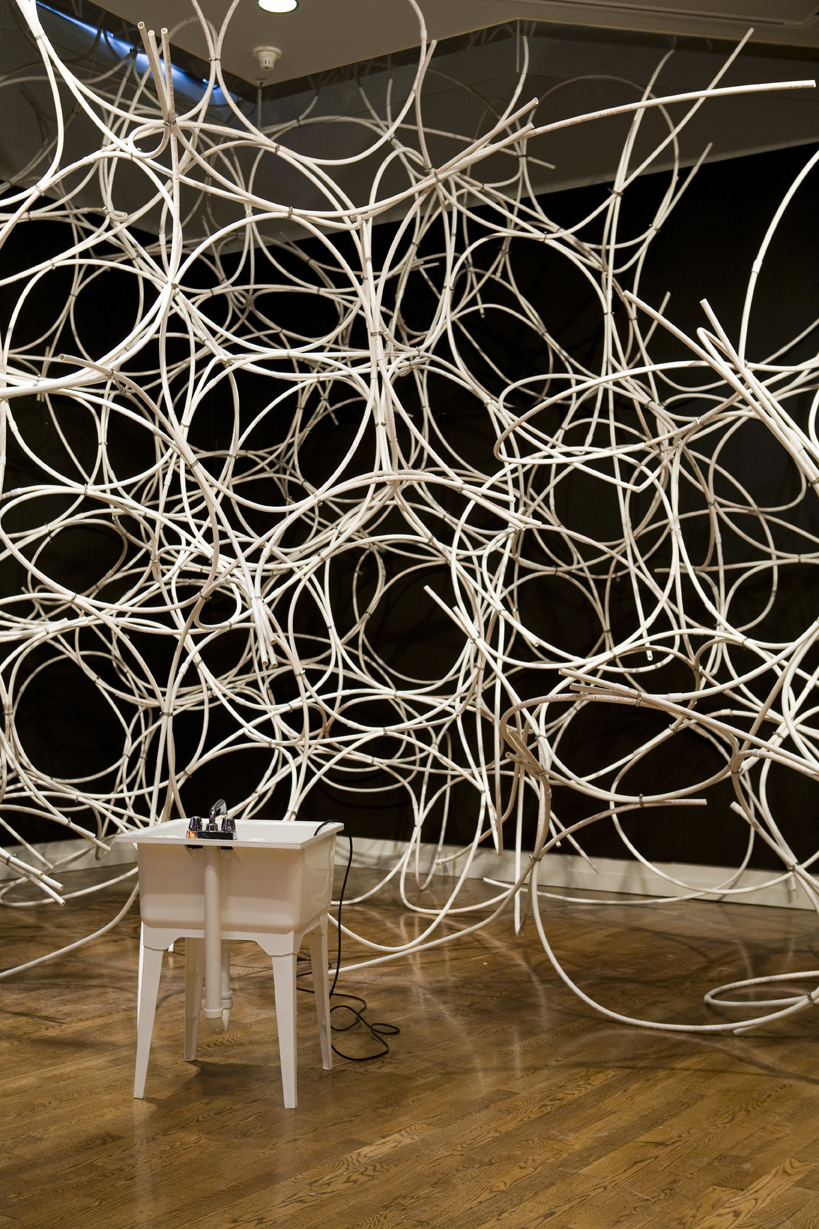 Steinhilber’s works are about observation, about seeing the natural in the man-made, showing that it is not so much his materials that are mundane, but our vision of them. At the downstairs level of the exhibition a large black and white “painting” by Steinhilber resembles a sensuous Clifford Still, but has actually been created with black and white garbage bags. A large rectangular wall piece, an ode to minimalism full of shimmering ambers and silvers, is actually row upon row of small packets of duck sauce lifted from the local Chinese take out.

Though full of commercial, man-made materials, the exhibition makes frequent reference to the natural world. On one side of the main hall, just above a free-standing sink with running water, a series of PVC pipes, bent but never cut or assembled, scales the corner space, from floor to ceiling. From the correct distance the work becomes a giant, delicate spider web.|0|


In one of the two darkened side rooms, Steinhilber takes the flickering florescent light bulb — that visual staple of so many movies of horror and apocalypse — and makes it into something of poetic beauty. By arranging a dozen or so of these in a line in a dark room, and installing them in their sockets for varying levels of flicker, he creates a piece that resembles a sheet of falling water. This might call to mind a natural place, but the visual also mimics many public art cascades — like the one at the Salt Palace, across from the Salt Lake Marriott where Steinhilber stayed while in Utah; or the waterfall wall at the National Museum of Art in Washington, D.C. 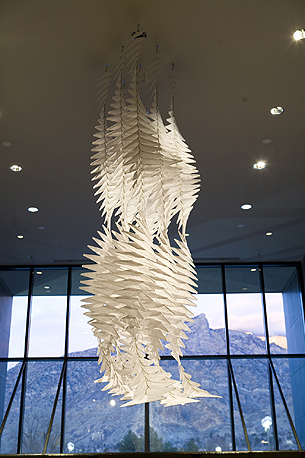 The hanger sculpture is an ode to natural forces and the grace of simple, utilitarian objects. Using the pull of gravity and the papered hangers’ man-given properties, the piece spins in a graceful form that calls to mind the skeleton of a sea creature and mimics visual elements of L. Brown Hatcher’s “Seer” sculpture, also on the Museum’s main floor.

Steinhilber’s works can be full of fun as well. On the opposite side of the room from the PVC installation, Steinhilber has used an iron to stitch together a bunch of black garbage bags. He fills the whole with air to create what appears to be a giant, malformed beetle or overweight dragon. Another piece, a large circular form made by hundreds of blown-up party balloons, appears festive but is actually the most melancholy of the pieces. As time moves on (the exhibition goes until June), air will seep through the balloons’ latex bodies, causing them to fall limp and deflate the entire piece. The air used to create the works will return to the place it came from.

Steinhilber’s works are imbued with a sense of grace and poetry and one might even say spirituality. He uses materials and space to create a manifestation or incarnation of art, but his materials, including air, can all be returned into themselves. Plastic to plastic and breath to breath. 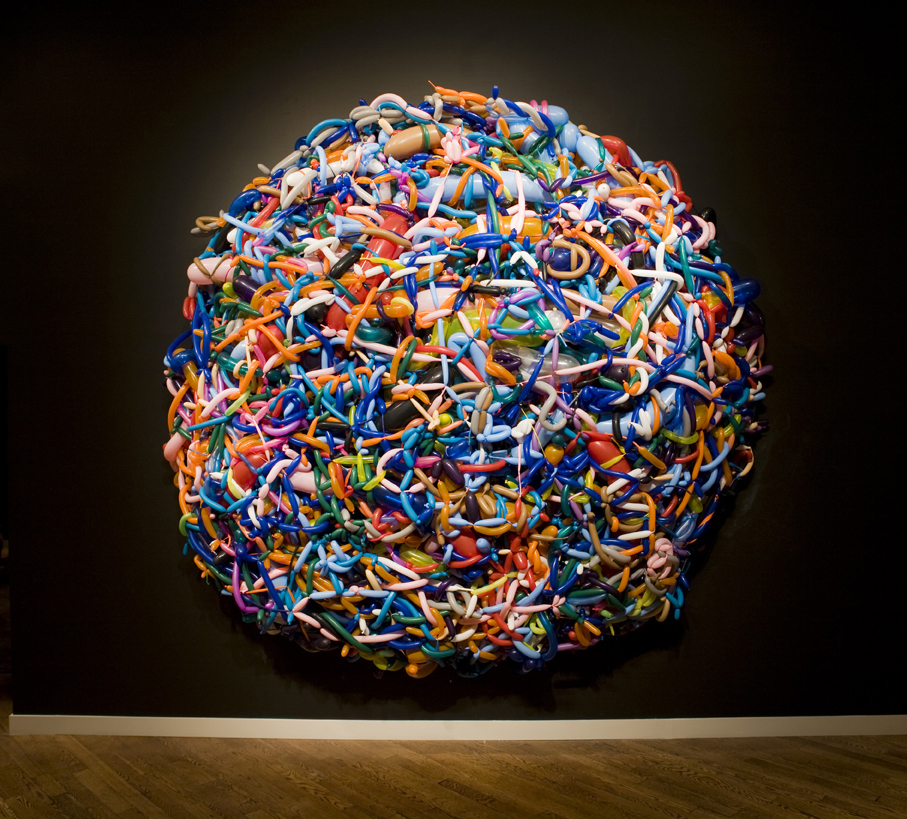 In one of his wall pieces, the artist has attempted to redeem the artist’s studio by using what he found on his studio floor to create a work of art. What appear to be thin lids of some sort, encrusted with paint and debris, are plopped on the surface of the work, calling to mind Schnabel’s crockery paintings. The lids are made of a silver reflective surface — an attention to light similar to the duck sauce piece — and as the image of a large fish appears in the piece, the lids become its shiny scales.

Movement is the subject of the exhibition’s crowd pleaser, located in another small, black room. In one corner three blowers, connected to timers, sit in front of a large pile of packing peanuts. Twice an hour the fans go off, sending the peanuts into the air into a roll and curl that resembles waves crashing on the shore. On the opposite wall a video shows the results of a related performance done by the artist and his son. Over a weekend when Steinhilber’s wife was away, he and his young assistant filled the apartment with packing peanuts and turned a leaf blower on them. The video camera follows the movement of the peanuts as they swoosh through the house. The video is a great romp, worthy of a Home Alone movie. Or, if the association of the packing peanut installation with the ocean is valid, Steinhilber’s video becomes an evocation of nature’s destructive side as seen in amateur footage from Katrina and other disasters. 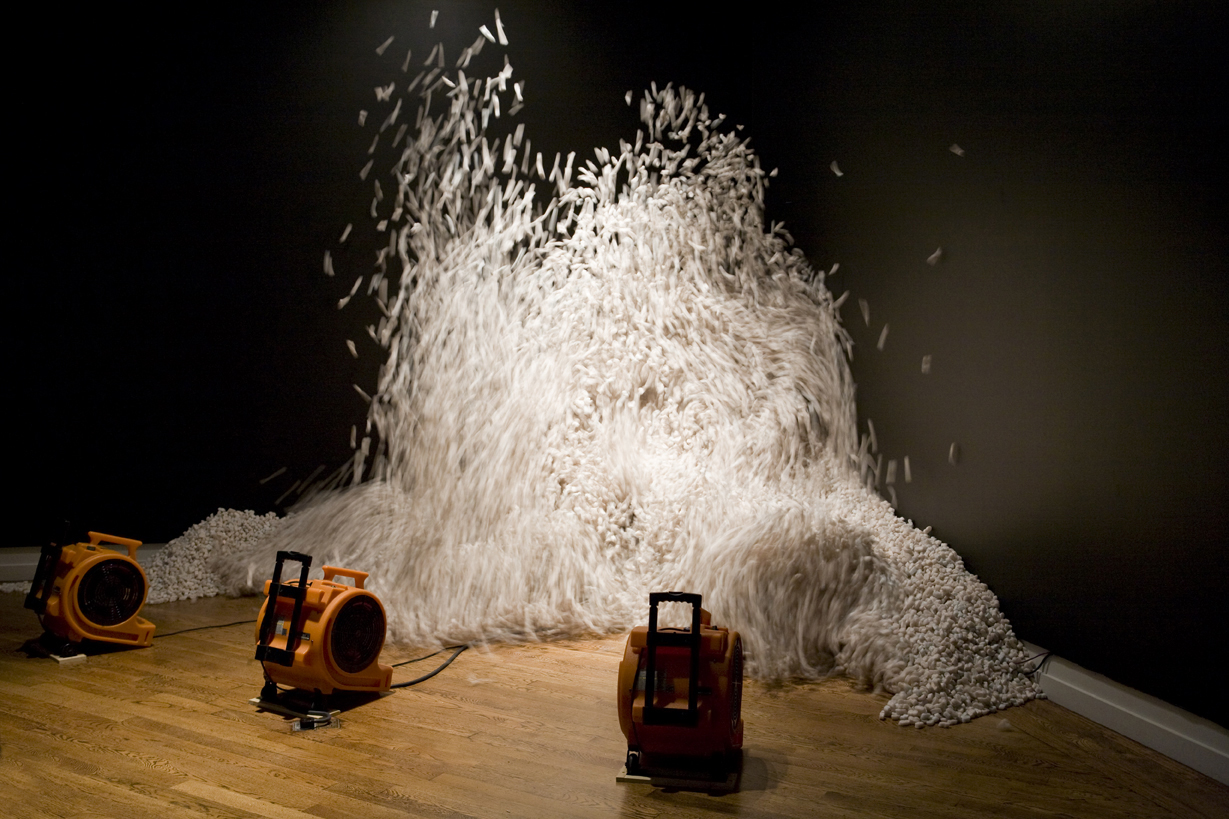