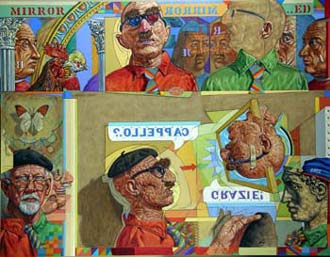 DaVinci. Okay, there, I’ve said it, and now 15 Bytes can join just about every other publication you’ll read this month where you’ll find mention of the famous poet, engineer, painter and courtier from the little town of Vinci. Of course, you’ll also be reading about a code.

But not here. I won’t even take the time to mention how silly the novel is, and as far as the film goes, well the book is always better, isn’t it, so you can just imagine what the celluloid Code must be like. But I will mention Leonardo daVinci, the man behind the most famous painting in the world, the Mona Lisa. Literally, he is the man behind the Mona Lisa, at least if one accepts the theory of Dr. Lillian Schwartz, who believes the Mona Lisa is actually a self-portrait. The source of that enigmatic smile, then? The artist liked dressing in drag.

What Mona/Leonardo’s smile tells us, whichever theory you hold to, is that portraiture still fascinates us. Not stiff, formal portraiture, the type commissioned by people of power and status – think about it, when was the last time you spent any amount of time in a museum gallery of 18th century portraiture? – but real portraiture, artistic portrayals of a person unfettered by the guiding hand of the patron. But how often does this happen? How many people can afford to commission a portrait of themselves? And of those that can, how many want an unvarnished (speaking figuratively) version?

Which leads us to self-portraiture and the current exhibit at Salt Lake City’s Main Library. Constructing Self: Thirty Self-Portraits is an exhibit of, you guessed it, thirty Utah artists portraying themselves and is being held in honor of the Utah Art Festival’s thirtieth anniversary. Portraiture and self-portraiture have managed to weather the artistic storms of the 20th century, faring much better than, let’s say, history painting, the former king of the mountain in artistic circles. Many modern artists – from the early ones, Cezanne and van Gogh, to more recent ones like Chuck Close, Lucien Freud and Andy Warhol — have made portraiture a central part of their oeuvre.

But, ask yourself, when was the last time you saw a portrait in a Utah exhibition? (Let alone an entire exhibition of portraits). And maybe for good reason. Unless you know the person, or the sitter has an intriguing smile, why care about portrait art? But there is something about self-portraiture that interests us in a way other portraiture does not. And maybe that is because when artists step forward to depict themselves, we expect something more than an agreeable likeness that will be pleasing to the paying customer. And something more is what you’ll find in this exhibit. 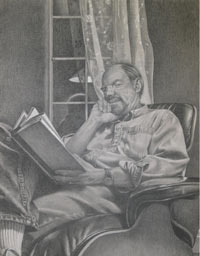 The actual number of likenesses – the number of pieces that will allow you to identify the artist on the street and praise them for their sublime talents – are few. Thomas Hoffman’s monochromatic charcoal drawing is one. Both the most realistically rendered and the most classic example of a portrait, the drawing shows the artist, by himself, sitting in a chair. There is something ironic about the face and posture. The portrayal is not hyped-up or overly flattering. But on the other hand, neither is it very penetrating. An artist knows him/herself better than they might any sitter, and for that reason self-portraiture is always doomed to be self-conscious. And as I think you’ll find in many of these works there is a tension between revelation and concealment, a tension most of the artist’s seem incapable of escaping. But possibly that’s the tension that makes self-portraiture interesting.

Sam Wilson’s painting features his usual array of figures from Classical and Renaissance art as well as the recurring wrinkled figure in fake Groucho Marx eye, nose and mustache. If you know what to look for, or just realize that it is the only figure in the piece whose gaze you can meet, you’ll see Wilson’s likeness in the lower left corner. That’s his true likeness, but the hide and seek game going on in the rest of the painting suggests we might find more of the artist where he isn’t – apparently – than where he is.

There is no doubting where to look in Ruby Chacon’s portrait, where a larger than life, confrontational image of the artist fills almost the entire canvas. Chacon frequently deals in portraiture, painting family members and friends, and also herself in a variety of settings and guises. Her piece is titled “Undocumented” though I have a hard time understanding why since in her bio materials Chacon frequently makes a point of the fact that her ancestors were here before most of us white folks.

If you thought it would be cool to be an artist and paint a self-portrait because you could do any kind of desired plastic surgery with the slice of the brush, then you most certainly will not get Kim Martinez’s portrait. Like Chacon, Martinez is dealing with ethnic and racial stereotyping. One in a series of works depicting Latina women in positions of power, her portrait looks like a purposefully unattractive portrayal of, I assume, the artist, dressed as some type of super hero. 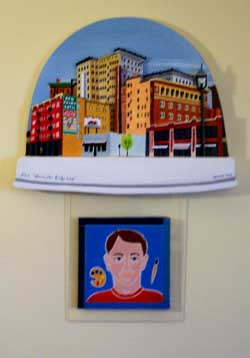 Identity politics has been a big issue in the visual arts in the last decade and was the impetus for a number of self-portraits, especially among minority groups. But what to do if you are a straight white male? John Erickson’s answer is to paint paint away. His face appears in many of his more recent works done in his signature fluid style. The work in this exhibit, “Here to Here Through Here,” is no exception. The familiar structure of his face is in the work, but it seems faded or obscured, blending into the background, as if, maybe we are seeing the artist’s face in the reflection of a window. An enigmatic rose is seen in the foreground and a sculpture can be seen in the background, possibly situating the artist in his profession.

That situating oneself in one’s profession (think beret, think easel, think palette and brushes) may be our most common impression of the self-portrait. Paul Heath depicts himself thus, a small likeness of his face between brushes and palette hanging beneath one of the pop interpretations of the city that are his trademark. Lenka Konopasek also employs the artist brushes as attribute, but in her case they are literal brushes hanging, with a number of other objects, from a large canvas. Through the forest of brushes we can make out an image of the artist, or rather, I sense, “Lenka” distanced from and obscured by her role as artist. 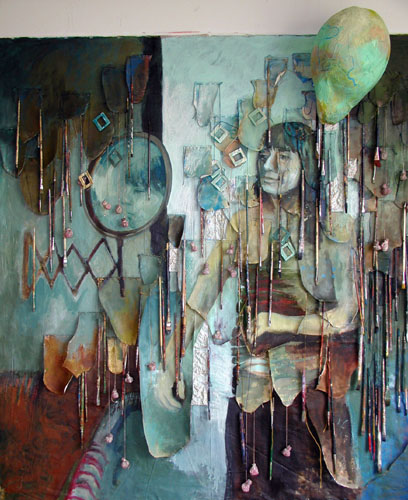 Other artist’s go even further in obscuring the likeness in the construction of their “self” portrait. Dorthee Martens’s piece is a shimmering cascade of safety pins that reach down and drape themselves across a pedestal. Three shiny, pristinely smooth and flat donut size discs are placed on the sheet of pins so as to represent breasts and genitalia. But the more prim of you need not worry, there is little sexy in this depiction. The cold materials make this piece distant, lacking the personal feel of what we might expect in self-revelation.

Sharon Alderman’s “It’s Personal” is the hardest piece in which to locate any personal references. A fiber based work, woven into a pleasing blend of mauve tones it is not much different from other pieces you’ll see by the artist and so it is hard to figure out what exactly is personal about it.

Whereas for this exhibit Alderman created a piece just like any of her other pieces, Anthony Siciliano, a digital and collage artist, gives us a self-portrait that surprisingly lacks the warmth found in most of his works. He usually creates collages out of old, “found” objects such as postcards and snapshots, creating a very intimate feel. For his self-portrait, Siciliano has created something drastically different in execution and tone. “Navigating the Night” shows the artist (a photograph) bare-chested, what appears to be a dunce cap but might also be seen as a nightcap on his head, holding a flashlight and standing in a small boat that is apparently floating down a back alleyway. Despite the flashlight, it is very bright in the image. An arrow-crossed heart is painted on the wall in the foreground with a teddy bear resting opposite. The overall feel, with the bright garish light and odd figure, lacks the personal warmth in Siciliano’s normal work, as if, despite revealing his torso, the artist has difficulty revealing other things about himself. 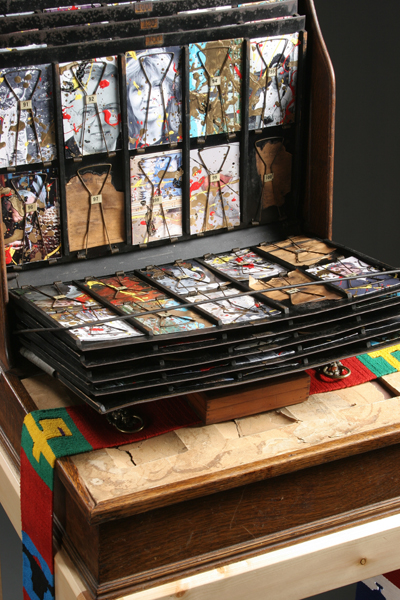 Many of these works, then, should be seen as works about the idea of self rather than necessarily the self portrayed. You will find more a revelation of the masks we wear or the compartments we live in than romantic images of the self revealed. Frank McEntire’s work, a pedestal piece, consists of a small box on top of what I take to be a stole placed in front of an old register box. A placard tells us the artist invites us to touch the sculpture. Opening the register box we find inside numerous images of the artist, his wife and his family. All are generally self-conscious images, taken with the knowledge of taking. Though their general context is that of the private life of an artist there is nothing that need not be public. In other words, they are not penetrating. To penetrate, then, we look to the small box, which is adorned with a crucifix. The box, though, is sealed with wax bearing the imprint of an “M.” Though there are numerous selves for view in the account register, there is always, this piece says, a self left unspoken, a self known to God.

James Charles’s work – a 3-D piece, but I hesitate to call it sculpture – really gets at the heart of the entire exhibition. “My Skin” is a latex mask of the artist’s face, which sits limp on the pedestal. The skin, the outward appearance of the artist/subject has been stripped bare to reveal that the outward appearance, that main object of the traditional artist’s interest, does not reveal anything. In the end it is simply a limp skin. 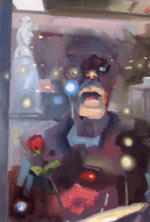 Obviously, this is only a rudimentary look at just a few of the artist in this provocative exhibit. Just know that I’ve warned you that before you go to the Main Library looking for a bunch of artists portrayed in their Sunday best, remember that the title of the exhibit is “Constructing Self” and the artists here have held to that premise. More than a representation of what they look like, the artists have examined the components, aspects, facades and faith that go into the construction of the self.

This exhibit continues through June 25th, the last day of the Utah Arts Festival.