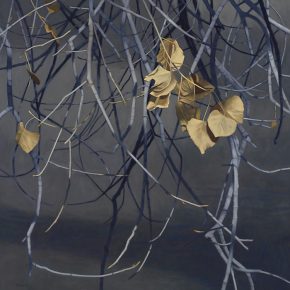 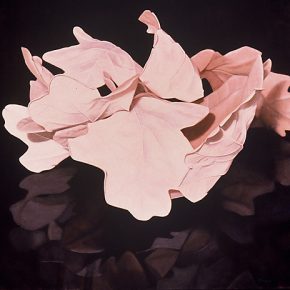 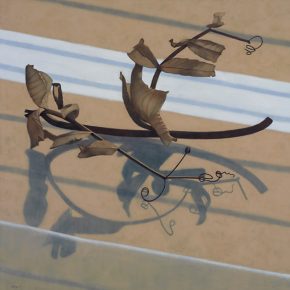 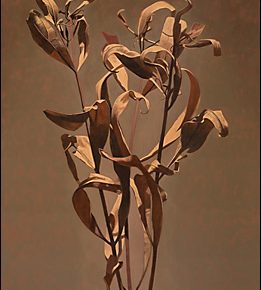 If these lingering autumns— where the clocks change before the leaves do, children solicit candy sans parka, and the first real snow tarries long enough to come as dressing on the turkey — if they are the West’s new reality, then Connie Borup is the painter to sing the praises of global warming’s silver lining.

Fall has always been important to Borup: its slanted light bathes her works in an ethereal glow and its denuded trees give strong and graceful lines to her minimal compositions. When Borup exhibited a new body of work two years ago, the season helped mark her shift in foucs — not a shift in locale or subject, but literally a shift in the length and breadth of her gaze. From open shots of lines of trees she moved her vision inward and down, to the leaves at their base and the water at their side. This is the type of artistic shift that frequently goes unnoticed — the paintings were still immediately recognizable as her work — but it is the subtle sort of change that can intrigue a mature artist, especially one who realizes the ground they thought they had covered has so much more to offer.

In her current body of work, on display at Phillips Gallery this month, Borup’s gaze remains near, like that of a botanist. She raises thistles and dry leaves to the stature of icons, lovingly coating them in paint. In her paintings background plays a servile role, waiting on pattern, line and color: in a work like “Light Touch”, the moving water behind the tangle of branches is barely reconizable as such, and the field of color behind the proud form of “Glory” could, for all the detail we’re given, represent a studio wall as much as the the fiery outdoors. Many of her subjects are placed indoors, always executed with graceful line and modulated color. Indoors or out, these works remain full of the season they celebrate: you can feel the crisp cut of the air, smell the brittle fabric decaying fibers, and hear the crackle of dessicated leaves.

Connie Borup’s A Closer Look is at Phillips Gallery through November 12.

This article appeared in the November 2011 edition of 15 Bytes.