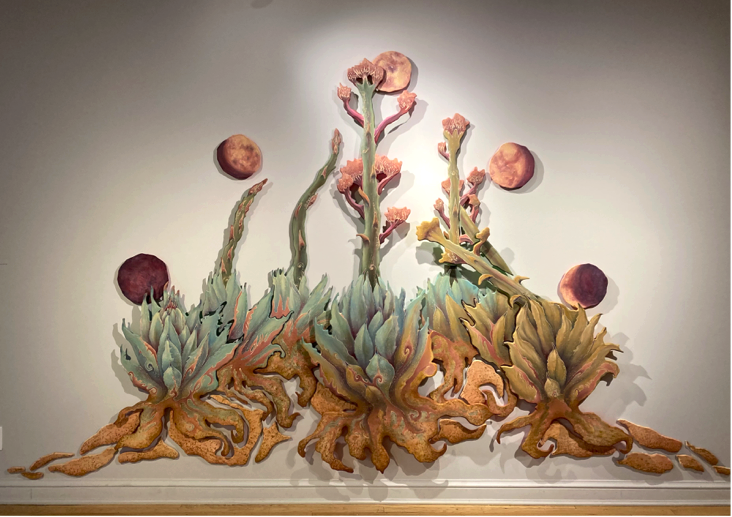 Wood cutouts of desert plants — mainly agave — colored with oil paints and accented with carved details fill the first room at Finch Lane Gallery. The work in Casey Lou Miller’s Intrinsic Nature is inspired by her experiences exploring the desert landscape of southern Utah. She celebrates the plants that grow in this environment in her work and says she views the final products of her art as a form of self-portraiture. Miller makes connections between humans and plants by recognizing transitional periods and cycles of life that are shared by both plants and humans.

This concept is highlighted in “Phases,” a large work that reflects the life cycle of an agave plant. Looking from left to right, the plant is shown first with fresh, vivid, green leaves; then an agave stalk (which looks very similar to an asparagus spear in color and shape) begins to grow; it flourishes at the center of the piece, filled with light pinkish flowers; then it begins to wilt, the stalk leans heavily to one side, losing life and you can almost hear the crunch of the dried yellow leaves. Behind the agave plant, four moons, each at different phases of a lunar cycle, further suggest the passing of time, reflective of the lifecycles that occur in our world. Further details, carved into the stalks, leaves, and flowers of the plant, expand on this theme. From a distance, they appear to outline different parts of the agave plant, but upon closer inspection, the carvings begin to take recognizable shapes/forms that mimic the sun’s rays, waves of the ocean, or the spiral of a snail’s shell. 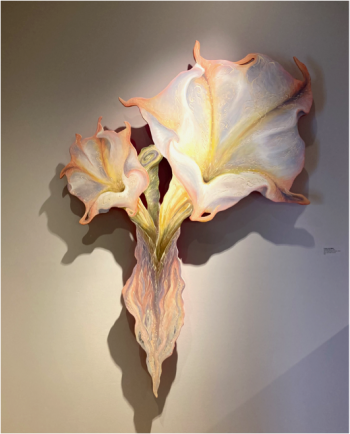 The detailed carvings in Miller’s pieces intrigue, they invite and reward a closer work. In another work, two blooming flowers sprout not from dirt but from a kind of rift of pastel colors. The green stems grow out of the pastel rift and blossom, spreading their petals wide. The blossom on the right is larger than the one on the left but both are accentuated with a light pinkish hue at the edges of their petals. The flowers are delicate and their edges waver like a piece of cloth in wind. The flowers look like moonflowers, which resemble a trumpet shape and only open at night, thus the title of the work: “Midnight Bloom.” The detailed carvings in this piece travel along every surface of the work, creating little swirling trails that feel reminiscent of the way an ant carves its nest out of the earth. These trails and designs take the form of a moth in the bloom of the larger flower on the right. The hawk moth is known to pollinate moonflowers and could be a subtle reference to the nurturing and life cycle of these beautiful blooms.

Intrinsic Nature presents and creates an ethereal space in Finch Lane Gallery. Miller’s works celebrate connection, color, and, plant life. She connects with these natural elements through their physical features as well as through the unseen energy that pulses inside and around plants. Her works flow and curve across the walls of Finch Lane Gallery, pulling the viewer in to admire the unexpected vibrant, pastel colors and detailed carvings that appear in her works.