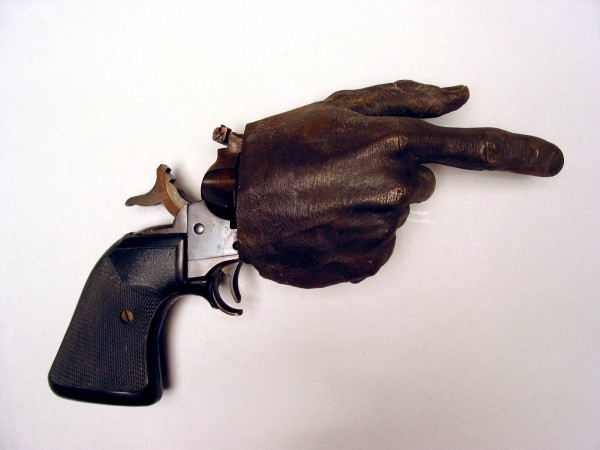 Some sculptors treat language as just another malleable substance, no different from wax or bronze. BYU Sculpture Professor Brian Christensen has chosen to call the dozen new works on display at the Central Utah Art Center Body and Time. Here “and” stands in for a word we lack: a double-ended preposition, meaning “in” but paradoxically navigable in both directions. Just as his technique is to simultaneously proffer and undermine the identities assumed of each of his materials, so his title means to be “time in the body” and “the body in time,” both sentences to be read simultaneously. 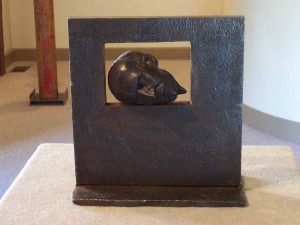 Start again. Brian Christensen, a youthful but no-longer-young sculptor, who lost both his parents in the past year, has assembled a dozen works that simultaneously investigate and overlay human biography with the history of his art. Using found metal, wood, and plastic objects, bronze and plastic cast from sculpted wax, and relying universally on assemblage, he’s created a collection of intimately scaled works full of legible ideas wrapped in materials that please the eye and tempt touching. His title, Body and Time, is redundant the way a pun is: two identities in one thing, like the way an art object becomes both the substance it’s made of and the thing it represents.

Think of the way sculptors use the word “body” in reference to clay. A clay “body” isn’t a figure; it’s the material’s character. Then again, sculptors are traditionally more interested in timelessness, in presenting what is permanent in the otherwise ephemeral. Time, like transparency, challenges the sculptor; it’s something sculpture doesn’t do well. To link the body with time in this way invokes Sartre’s great pair: Being and Nothingness. 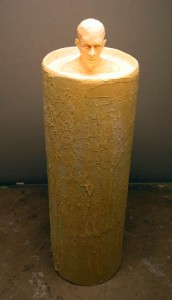 Nothingness has something to do with it. In addition to meditating on the evidence, visible in his aging self-portraits, implicating him in his own eventual extinction, Christensen has set himself the task of finding a visual language in which to commemorate the passing of his parents. The two works that do this most directly span most of sculpture’s history, from academic bronze to post-modern resin. “Pater” — Latin for father — perches the ravaged face and thinning hair of an old man horizontally upon the sill of an otherwise empty window, cut through a blank, featureless wall. One thinks of Janus, the two-faced Roman god of portals, after whom January, when one year passes into the next, is named. But when we walk around to the other side, the back of this head is fractured away. There will be no more years. Here is past without future, underscored by the passive way the head lies on its side, or the delicacy with which Christensen renders the parchment skin of age. “Leche,” |3|on the other hand, traces the gift of life to its source. Resembling a giant candle, with the artist’s bust in place of a wick, its drip-covered, cylindrical waxen body holds in its hollow top not molten wax, but a pool of milk, from which the equally white head emerges. Milk has become a resonant sculptural material, and as Christensen’s head seems to rise, dripping, from the contents of the pipe-like vessel, it comes to mind that all milk is “mother’s milk.”

Of course the Postmodernist Christensen is free to mine the academic force of his art’s past without accepting its contemporary powerlessness. Potential energy and even motion are common in today’s sculpture, and none of these works is static. “Crucible” presents a still life, its three parts caught balanced at the last moment before they tumble off the pedestal. “Blunt Instrument” invites viewers to take it down from the hook where it hangs and heft it. “Deep Sea’s” long strip of corrugated glass mimics the translucent optics of water, but when the breeze from a passer-by sets it in motion like a pendulum, the sea becomes palpably present. Passing time is present in several ways in “Macaroni.” The found objects — clamps, gears, saw blades, machine housings, and scraps from the foundry floor — speak about their individual pasts, while their assembled sphere makes the piece’s surface a vortex of texture that the eye cannot hold still. Beneath their cosmic dance, graphite spheres emerging from a salvaged steel elbow carry industrial allusions over the line into biomorphic reference. 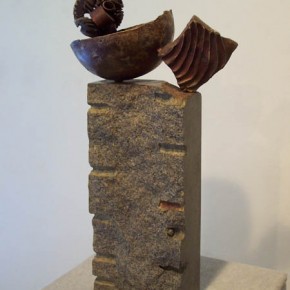 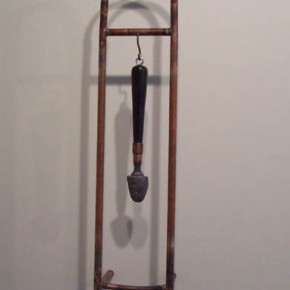 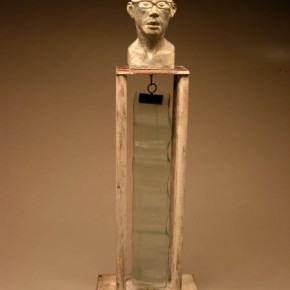 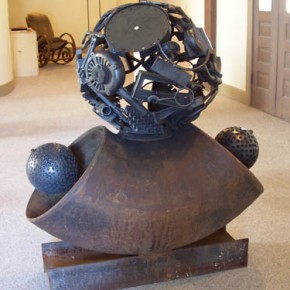 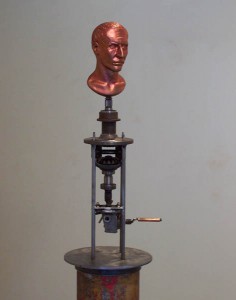 Two pieces arguably carry time and motion too far. “Accusation” literally welds together the frame of a revolver with a cast bronze hand, so that a pointing index finger replaces the gun’s barrel. Mounted on a couple of crutches that could have come from a Dalí painting, its cocked hammer invites the observant viewer to pull the trigger. At the opening, the artist obliged by doing so, proving that the pistol still worked. Across the room, meanwhile, “Rubicon” places a garish bust of Caesar atop a tower of shafts and planetary gears. Visitors were encouraged to turn the crank at the bottom, setting the head to spinning dizzily. Everyone seemed to enjoy the chance to participate, and the crank is irresistible, but the result was anticlimactic. I was left wondering if the ability to imply and the power to withhold are not more valuable in art than satisfying the viewer’s desire to be, essentially, entertained. 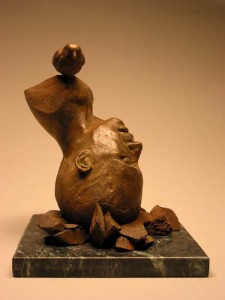 It makes a certain sense that when several works are produced at the same time, there may be thoughts in one that seem to be continued in another. From a dozen works, several suggest themselves as pairs, either by their contrast — father and mother, snap vs. spin — or their restatement of the same idea. Like synonyms, two objects that look nothing alike can both hang on the same figure of speech. “Despair and Hope” and The “Bottom Line” are such a pair. In the former, a fallen bust is held inverted on a marble slab, propped up by shards of the same metal. A bird perched on the exposed underside of the bust contradicts a sense of ruin, and there’s a sly joke as well: a monumental portrait is often a perch for birds, but it’s not usually seen as good news. Casting both from the same metal puts the sculptor’s stamp on the connection, but it undermines the distinction between despair and hope: as so many great thinkers have said, and the war against terror is once again proving, a victory closely observed is indistinguishable from defeat. 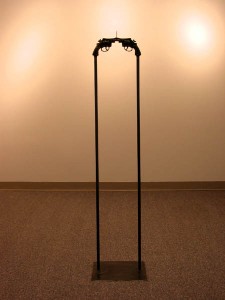 Nearby, “The Bottom Line” comments on unregulated competition as the arbiter of success. Atop two spindly rods, a pair of cast, attenuated handguns confront each other, barrels welded mouth-to-mouth in a potentially explosive kiss. It feels far more violent than “Accusation.” Driving home the point, a silver dollar perches like a gun sight atop the meeting of the two barrels. It is this coin that succinctly repeats the central trope of “Despair and Hope”: on one side, the bust of President Eisenhower balances head down, while on the other an eagle, its wings still spread, lands right way up on the moon. It’s an ironic statement however deciphered, and of course it doesn’t have to mean anything. But it’s tempting to read it as arguing that personalities and celebrity are unreliable, while accomplishments ought to speak for themselves.

Given Christensen’s penchant for recycling materials to exploit their associations or their patinas, it’s particularly appropriate to see his work in CUAC’s recycled limestone granary. Equally telling was the juxtaposition, just outside the door, of the Center’s collection of conventional modern sculpture. None of the works in the gallery is as large as the smallest piece on the lawn, and despite their industrial materials, the mind shrinks from the idea of leaving Christensen’s objects out doors. In the delicate preservation of some surfaces, and the careful preparation of others, as in their scale, they ask us to share space with them, examine them closely, and consult them frequently. Conventional wisdom has it that sculptures either stand freely or hang on the wall, but Christensen invokes a far older dichotomy. Against sculpture as a public statement, he offers objects like fine books, intimate enough to please the hand as much as the eye, capable of engaging the individual in a personal conversation. It’s a concept as old as the Stone Age Venus figures these works evoke, but as relevant to today as the personal computers we fill with our memories and then carry in our pockets.