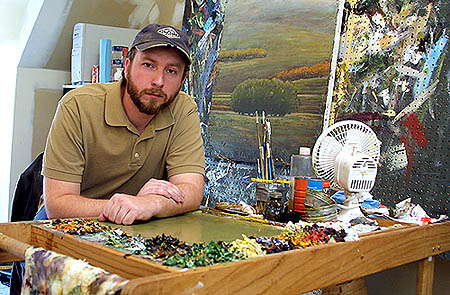 A cursory glance at his work might convince one to label Cook exactly that — just another landscape painter, accomplished in technique, but not much more. Nothing new. Nothing innovative. But a glance does nothing to absorb the complexity of Cook’s work.

Cook is in the process of developing a personal style that takes advantage of the best of the tools for paint application and pictorial conception developed over the last century. His one-man exhibition, currently at the Eccles Community Art Center, reveals a young artist who is coming into his own. He is developing substantial paintings of grandeur and grace, energy and enthusiasm. And he has laid down enough possibilities on his canvas to continue making such works for many years to come.

Cook’s works are much more than mere landscapes. They are explorations of what has always made painting a great art, a magnificent enterprise. Like the masters of the past century and earlier, Cook delights in the process of painting itself. His works dance that marvelous waltz between the second and third dimensions which makes painting so fascinating. They are primarily abstract works, dealing with formal issues and expressive moods. In the end, they may have very little to do with the landscape.

And that may be precisely because Cook never meant to be a landscape painter. Cook studied art at Utah Valley State College and the University of Utah. After graduation, he moved to the Huntsville valley, east of Ogden, where he planned to work on figure drawing and painting. To his surprise, the landscape of his surroundings quickly took over.

“The more landscapes I did, the more I liked it,” Cook says. “I tend to look at things very abstractly, as patterns and designs, and it seemed real easy to work that way with landscapes.”

His choice of landscape painting hides the fact that Cook seems to be a seriously formal artist. The elements of his landscapes are like any constructional elements – they could be apples, or a newspaper and mandolin—they are an excuse for him to work with his paints and his surfaces. The landscapes have become a vehicle through which Cook can explore his own personal visual medium, much the way the still-life was for Picasso and Braque and the figure was for de Kooning.

Cook’s work has much in common with these artists and other 20th-century masters, though not necessarily in individual stylistic elements. The most apparent influences on the “look” of his paintings come from more immediate sources, like Paul Davis and David Dornan, both of whom he studied with. But beyond his local training, Cook is an artist exploring the formal elements of his art. His is an exploration of form, color, and the physical qualities of paint. 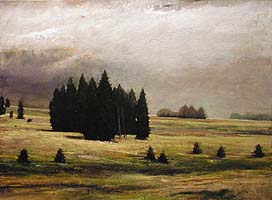 In many of his works, Cook’s compositions are fairly simply, dealing with three or four intersecting planes. The heart of his compositions is often a clump of trees tucked into the cusp created when hill meets valley. This three-part composition is repeated over and over in his work.

Cook creates depth in his compositions very simply by this overlapping of planes, the simple forms of foreground, mid ground and background. His best work as a painter, however, lies in the creation of a different sort of depth, or form, in his painting – the one created by his forepaint, mid paint and back paint.

At the base of Cook’s paintings are a simple drawing and a washed-in layer of paint. But even at this very basic level, Cook begins to communicate with the work. He is already developing value, shade and effect. In visiting his studio, I see his newest work, a line drawing and an umber ground. Even at this stage he has begun the intense interaction with his subject that will produce the finished effect.

“I paint using extreme ranges of value, color, texture, thickness, and thinness. I brush into the canvas, rub it, spatter it, scrumble it, glaze it. I use brushes, rags, cotton swabs, my hand, fast strokes, short strokes, wet over dry, wet in wet. I throw paint on, pull it off, let it run—anything I can do to manipulate my medium, to draw out the sense of attachment I feel for the subjects of my painting.“

His work looks to be about three or four layers of washes in oil, permeating and holding the canvas, with another three or four impasto layers sitting on top of the canvas. 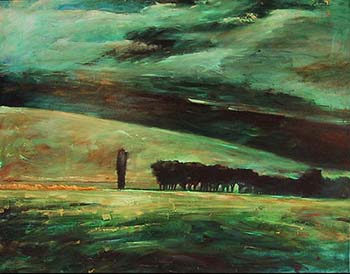 Passages of his works get so caught up in the gesture of painting, the process of destruction and creation that interests Cook, that they look like the work of an abstract expressionist. In parts of a sky or field you can see passages of painting as beautiful as something by Lee Deffebach, scrapes of paint sitting on top of wonderfully modulated underpainting.

This is the typical landscape that Cook has made his own — the Huntsville area, with its gentle, modest hills and flat fields, flanked by lines of trees. Great landscape artists recreate a landscape so well that we can no longer view that area without seeing it through the refraction of their vision. Cezanne’s Provence, Marquet’s Paris, Dixon’s Western skies. Cook has done that with his tiny corner of the world.

He has found in this landscape a great recipe for complicated works based on simple design. Cook creates a strong and simple sense of receding space with his overlapping planes, but he is always most stringent about keeping that depth true to the two-dimensional plane of the picture’s surface. His constant decorative surface ties all the planes together, never allowing them to recede too much. He rarely shows the blue sky, which would create so much depth. He keeps meadow, hill and cloud flat up against the picture plane.

The West is all about the feeling of expanse and the wide blue sky, but there is also that unique sensation — when the clouds settle in and hug the hills — of there being a roof on the world. “Autumn Spotlight” is a beautiful example, where a wash of cloud rises up, caresses the hillside, and holds it. Cook’s paint, like the clouds, tends to sweep across the surface of his images, depicting wind and moving weather in the flick of the artist’s wrist.

His world is an emotional one, filled with overcast skies and stormy clouds rushing on to the landscape. Many of these rainy scenes, especially in smaller works, share the tonalist qualities of someone like Michael Workman. 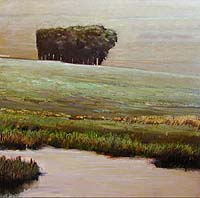 In fact, one of the works at the Eccles, “River Trees,” shows a glimpse of a creek (crick) in the foreground with a clump of black trees in mid ground that could just have easily been the black form of one of Workman’s grazing cows.

But where Workman’s pieces seem calmed, soothing, delicate, Cook’s works seem to be at their best because they are anxious and engaged. If Vern Swanson can dub Workman a “tonal impressionist” then I might call Cook a “tonal expressionist.”

But that title would be too restrictive, because Cook’s tones are so often bursting with bright color. He has a penchant for golds, greens and mauves, but his process of painting puts the whole spectrum of his palette on to the canvas.

The exact range can often only be appreciated on close inspection. The paintings give 20/20 pleasure, equally appealing from a distance, where the composition and forms are laid out, as they are from close up, where one can concentrate on the layers of paint.

The work’s interest lies in this give and take, between form and surface. They also appeal on an intellectual give and take between representation and abstraction. “Symphony” – a composition of four or five dark forms (representing pines), on the general slope of a mountain hill – is a wonderful example. The pine trees hold the piece together, identify it. Hints of aspen clumps are there, but the overall form never really holds. The painting brings the viewer in and out, teasing them with form, but always taking them back to the expressive, decorative qualities of the paint.

The exhibition at the Eccles center shows Cook as an artist working out his ideas in repetition of motif but it also shows him developing and exploring. A work like “Winter Shadows,” and some similar though less accomplished works in the show, is a compositional shift for Cook. He has left the heavy, grounded valley floor and looked for new vistas. This piece is the intersecting lines of a snow-filled range, scene from above. The criss-cross of hills is brought right up against the picture plane. A cloudy sky makes the top of the picture no deeper than the bottom, keeping the viewer at the surface of the work to see the marvelous paint qualities. This use of a cloudy sky to democratize the depth of the planes is a constant tool in Cook’s work. 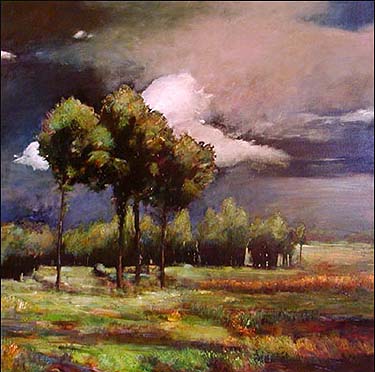 Cook’s effects are both subtle and daring, the best type of painting, the type that lives with someone and gives them experience over time. A work like “Drenched” seems at first a fairly simple, static horizontal composition, not unlike many of his pieces. Foreground, a middle ground of trees, and a background of passing clouds. Everything is laid in horizontal lines without a dynamic diagonal in the drawing.

In essence, the painting is a two-dimensional overlapping of planes to create depth. But there are invisible interactions going on in the piece. The slight sway to the right of the furthest tree on the left gives just enough emphasis to push the painting to the right and upward. The masterful touch of the cloud shape behind the trees, which mimics the line of the trees, carries this push back to the next plane rather than allowing it to simply slide across the surface of the painting. This backwards and upwards push to the right is carried further by the darker gray cloud.

All, however, is kept in check by the very subtle touches of light clouds in the upper left and the weight of the lower level of trees to be found at the left. It is the type of compositional control that makes many classical paintings so dynamic as formal works. Cook has been able to meld the best that the history of art has to offer him into complex and dynamic works.

The Eccles Community Art Center’s one-man exhibition of Brandon Cook reveals a young artist of outstanding talent who is scraping, scratching, brushing and washing his way into a very personal style. His works are complex relationships of color, form, texture and movement. In his color and paint application, Cook’s strengths can be as ostentatious and beautiful as a strutting peacock, and, in his creation of form, as subtle as a whispered prayer.

Brandon Cook will be exhibited at the Eccles Community Art Center through the month of May.

His works can also be viewed online at: www.brandoncook.com or in Salt Lake at the A gallery.