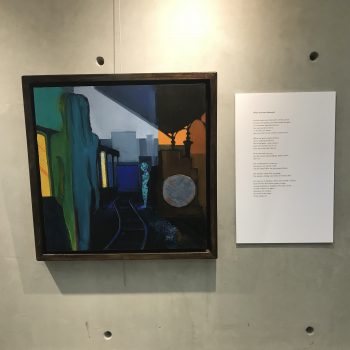 When the “blue nudes took themselves off the canvas,” writes poet Laura Stott, “It wasn’t easy getting out from behind the glass.” Blue Nude Migration: A Painting and Poetry Collaboration,an exhibit by Laura and her sister Katheryn Stott currently on display at the Anderson-Foothill Branch of Salt Lake City’s Public Library, showcases 14 of Katheryn’s interpretive paintings, each inspired by one of Laura’s poems (the verse hangs to the right of the artwork).

Laura’s poems initially were inspired by the Blue Nudes of Henri Matisse. Who were these figures? the poet asked herself. What kind of lives would they lead outside their existence of art and enclosure?

Laura’s poetic excursions developed into a creative project independent of her original inspiration. With blue nudes as her muse, the poems explore the Alaskan wilderness, railroad tracks in Spokane, the desert of the western United States. In this sense, the blue nudes find themselves off canvas but in our world. But in the poem “Looking Up,” they serve as facilitators for mystical transportation.

What about these blue nudes in the sky?

Enter Katheryn, whose paintings provide a response to the poems, a point of departure, a conversation that includes an additional artistic perspective. If Laura endows her subjects with transcendental “lives” through verse, Katheryn’s art provides visual reinforcement, contradiction, speculation, and elaboration. Consider the painting that hangs in association with the poem, “This is What Didn’t Happen.” After the blue nudes are identified as being lost in the Alaskan woods,

They are moved to pray. They kneel

beside a false azalea and ask God

to provide a bird to lead them.

They pray and pray.

In the foreground of Katheryn’s Fauvist-bold painting, the figure of a blue nude holds her palms together, fingers upright, the outline of her featureless face beseeching heaven in prayer. Three other blue nudes occupy the background. One kneels with head downward turned; one stands with her back toward the viewer; another faces us, head tilted to her left, perhaps listening to something in her hand. Above this grounded scene, a blue jay perches on a tree branch. None of the nudes see it. 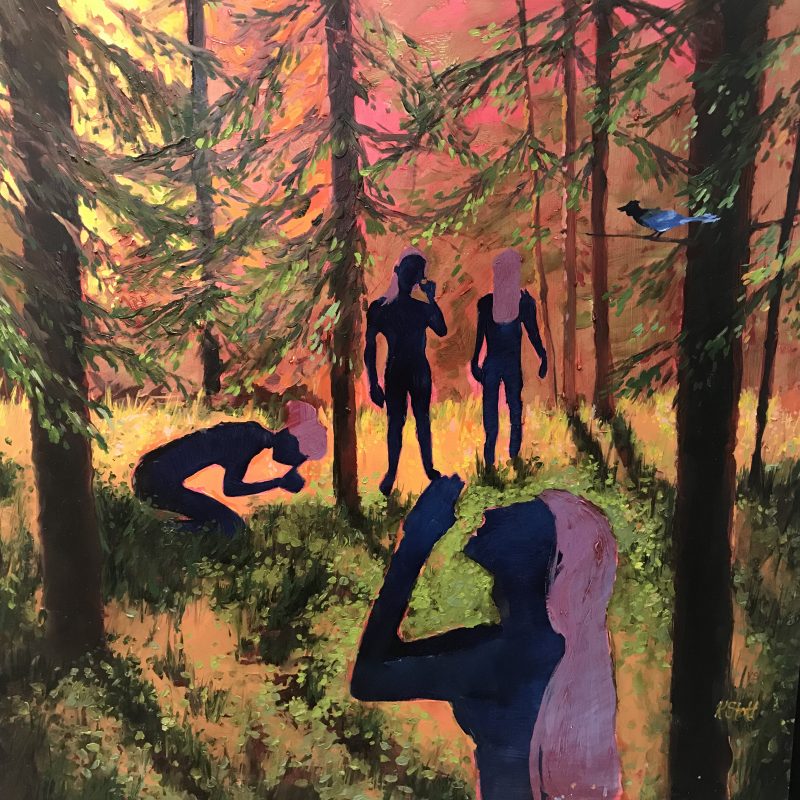 Is the bird’s presence the result of prayer? Or does Katheryn’s visual extension of Laura’s poem intend to suggest that what prayer seeks already exists in nature? Does the bird’s presence mock or underscore the value of faith? Indeed, the poem’s ultimate line suggests that the blue nudes continue to pray for God to send a guide. The painting, however, presumes a bird on location—nothing out of the ordinary for being in the woods, but what, exactly, as an artistic response, does the painter intend to convey about her interpretation of the poem?

An ever-present tension of influence, commentary, and evocation exists between artists. Caldecott Medal-winning author and illustrator Maurice Sendak once mused: “Old artists like to have young artists around… to destroy.” Although the author of Where the Wild Things Are openly admitted to his plethora of influences (Mozart and Emily Dickinson among them), Sendak wryly observed the interplay between works of art and their makers. Whereas the young artist is challenged by the pitfalls of imitation, the old remain wary of being overthrown.

Blue Nude Migration presents us with a unique opportunity to participate in an exchange of inspiration, interpretation, and commentary between writer and artist, artist and poet, poet and the world. Consider the poem “Blue Nude, Chapter 1.” It begins with an epigraph from Matisse: “It has bothered me all my life that I don’t paint like everybody else…”

Laura’s verse then catapults the reader into a flight of cadence and lyricism.

We do not pretend

to know what she is thinking in her pose,

what colors she will suppose 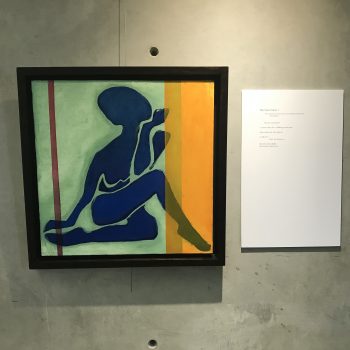 Accompanying this poem is the only one among Katheryn’s paintings that pays homage to Matisse by imitating his achievement of form in “Nu Bleu IV” (1952). Here, the painter draws upon the poem’s original inspiration to inform Matisse: By not painting like anyone else, the world now paints like you.

As a reader, I think there exists an important discussion about Laura’s and Katheryn’s blue nudes (no longer Matisse’s) in this, our era of Trump and sexual misconduct, Trump and misogyny, Trump and toxicity; Trump and the necessities of feminism. Blue Nude Migration may begin this or other conversations for you. Visit to engage the discussion for yourself.