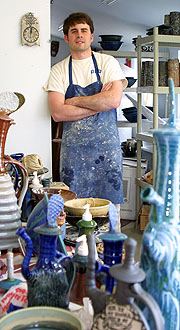 I have visited many artists’ studios, but none that made me smile as much as Ben Behunin’s.  Behunin, born and raised in Salt Lake City, has been working in ceramics full time for the past seven years. In addition to his artistic career, Behunin presides over Clay Arts, Utah and Local Colors Gallery — two non-profit organizations created and managed by local artists.

Behunin’s two-story studio sits conveniently behind his Salt Lake City home below the University of Utah.  The gate leading to his backyard is a gate leading to a world of whimsy and inventive imagination. Ben is primarily a potter, but I soon noted his creations clearly extend beyond clay.  A large mobile suspended from his studio caught my eye as I stepped through the gate. Standing wind chimes and other metal works decorate his deck along with dozens of ceramic heads that made faces at me as I walked toward the studio entrance.

Inside Behunin’s studio, a plate hangs on the wall that says, “stay hungry,” words derived from the philosophy of Plato, and Ben’s personal motto. Stacks of unfinished platters, piles of pots, mugs and many other functional wares sit on shelves alongside larger, more sculptural works such as large urns and odd-looking teapots.  The artist describes these larger pieces as his “higher-end items.”  He currently sends 80-85% of his work outside of Utah, but he is hopeful that clay sales will rise here at home soon.  Because of the dipping economy, he has put these higher-end items aside and focused more on the smaller, functional and more affordable items. Behunin says the key to surviving these economic times is diversification. He doesn’t put all his eggs in the same basket and he markets directly to the public as well as the galleries.

Although Ben’s signature pieces are his fish platters and “gear heads” (transmission gears with ceramic faces), his personal favorites are his large teapots. “I love the challenge about making something that big. The notion of a three-foot teapot that’s shaped like a human form…I just look at them and they make me laugh. Almost all of them have feet so they look like they could get up and walk off.  I enjoy watching other people walk past them and listening to their comments. On a smaller scale, the spout is crooked and bent and sometimes I cut it five or six times and put it back together so it looks something like Dr. Seuss plumbing.”

Humor is a quality that seems to manifest itself throughout most of Ben’s art. The fish on his large platters seem to be angry with you and the gear heads are inspired by the facial expressions of family, friends and other people that capture his interest.

Ben is the president of Clay Arts, Utah which was founded over three years ago when clay artist Etsuko Freeman graduated from the University of Utah and didn’t quite know what to do with her craft. She wanted to create a community of potters and ceramicists. Freeman rallied other clay artists in the area, including Ben Behunin, and after several meetings the organization was established.  Ben believes having a community of artists who share similar interests to discuss ideas and values serves as a great support system. “I’ve traveled quite extensively to the west coast and the northwest and over in Europe as well. There are huge amounts of artists concentrated in those areas, but here there aren’t as many artists working full time. Coming together to help support each other encourages us in many ways to keep going when times are hard.”

Clay Arts, Utah has two components to its mission statement: The first is to create a community of clay artists and potters, and the second is to educate the public about their craft. “It’s more a re-education than anything. All the time we get people coming up to us saying ‘Can I actually use this for food?’ Our ancestors have eaten on ceramic plates and dishes for literally thousands of years.  Now people seem to think if it isn’t shrink-wrapped or you can’t buy it at K-Mart, it’s not safe to eat on.”

It’s becoming more apparent that established arts organizations not only help artists by providing a support system, but they help the public become more aware that there are indeed artists here in Utah. “When we send out cards informing the public of our annual Christmas sale, we take the mailing list of all the artists and combine them. Some of these people who buy my pottery might also buy Aaron Ashcraft’s pottery or Jim Simister’s pottery. Bringing all these people together and letting them know there are potters here has a lot of strength. It’s a real tragedy that so many artists have to send their work outside of Utah in order to make a living. I think combining and coming together in mass helps people to recognize that there really are artists here making a living at this and do have great things to offer.” 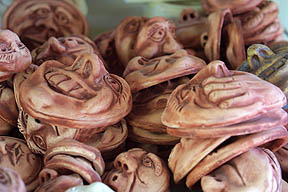 One of their most successful outreach programs is the “Empty Bowls” project with the Salt Lake City Mission. For one night each fall, they partner with the Salt Lake City Mission for a night of celebration of bowls and soup.  The Mission provides soup for everyone who comes to buy a bowl crafted and donated by the potters.  Each bowl is unique and, believe it or not, safe to eat out of. So far Clay Arts, Utah has raised over $13,000 with all the proceeds donated to the charity.

In 2001, Clay Arts, Utah came together to put on a couple of juried exhibits at the Utah Arts Council’s Rio Gallery. The first was a teapot show and the second was a sculpture show.  They will exhibit at the Art Barn in Salt Lake City this coming July. The show will be called “Massive” with each piece being at least 24 inches long in one direction or another.

Not only is Ben the president of Clay Arts, Utah, he presides over Local Colors Gallery in Trolley Square as well.  The non-profit co-op is made up of 42 artists ranging from potters to jewelers to painters. “There are a lot of artists here in Utah that end up giving up because they don’t have the ability or the opportunity to sell their artwork. It’s a discouraging thing, so I wanted to offer a space that wouldn’t be concerned about making money, but more concerned with giving artists an opportunity to show and the public to see the wonderful art that Utah has to offer.  I just wanted to avoid any snootiness that’s often associated with galleries. I was basically thrown out of a gallery once in Sugarhouse. The guy actually said ‘If you’re not going to buy anything get the hell out of my shop.’  I wanted to create a gallery that was inviting to anyone no matter how much money they had – no matter what they were interested in and I think that’s really what we’ve accomplished.”

Anyone who walks in to Local Colors will be able to find something they can afford. The gallery is a member of the Salt Lake Gallery Association and participates in the Gallery Stroll. The diversity of the work and the regular change in inventory keep customers coming back to see what’s new. Ben tries to keep things fresh by rearranging the artwork in the gallery twice a month. “I’ve been in galleries around town that if you’ve been in once, you probably don’t need to go in again for another year because nothing will change.” 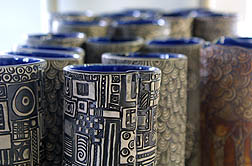 Behunin hopes his own artwork will never stagnate. “I know of potters who have been making the same forms with the same glazes and selling them in the same galleries for twenty years – that’s really of no interest to me. I know if I’m in the same place I am today a year from now or even a month from now I probably will have failed, even though financially I may have succeeded.  If I’m not constantly evolving or developing, it’s not worth any success to me.” As for Ben’s aspirations for the future, he says, “I’m constantly hungry and looking for new opportunities. I’m not sure what the future holds, but I’m sure it’s going to be exciting.”