How Aïsha Lehmann Found Her Mojo

Aïsha Lehmann emerged on the art scene rather dramatically last October with Mixed, a sensational exhibition at Finch Lane Gallery. Mixed featured nine large portrait figures, and while “mixed media” may no longer be a useful term, due to its nearly universal use by artists today, in this case it still seems appropriate, because while her technique brilliantly mixes materials and media, her subjects’ ethnic blending, usually labeled with the discredited term “mixed race,” elevated them to become deeply moving paradigms of humanity.

Usually when an artist bursts into public awareness the way Lehmann did last year, someone will point out that she’s been working in the shadows for years, but only just received her lucky break. Aïsha Lehmann’s story isn’t like that. As a teenager, she was interested in art, but had no sense of vocation until about four years ago, when she showed some work that gave her a new feeling of success. College followed, which is notorious for killing youthful enthusiasms, and then, of course, came a global pandemic. At that point, some ambient forces reorganized her life and set her up to make some brilliant choices.

The first was a challenge that will be familiar to present and former college students: the table of course requirements at her school, which was (and still is) the BFA program at BYU. College has a way of bringing to the fore buried doubts about a subject, which in Lehmann’s case were genuine questions about art as vocation. Like many of her peers, Lehmann saw the world as a troubled place that she wanted to find a way to help, yet she intuited that art has scant power to effect real change, which gave her second thoughts about choosing it as her major. Still, she felt, and subsequent events seem to have born her out, a powerful call: a not yet fully-formed sense that art can make our lives better. While she grappled with that dilemma, she received a push from the list of prerequisites, which opened her mind to a variety of disciplines, like sociology and psychology. One in particular, a class in International Development, led her to a two-pronged approach: a fine arts major with a minor in social work. She soon found out that being a legitimate academic as well as an eloquent artist is her ideal professional identity. 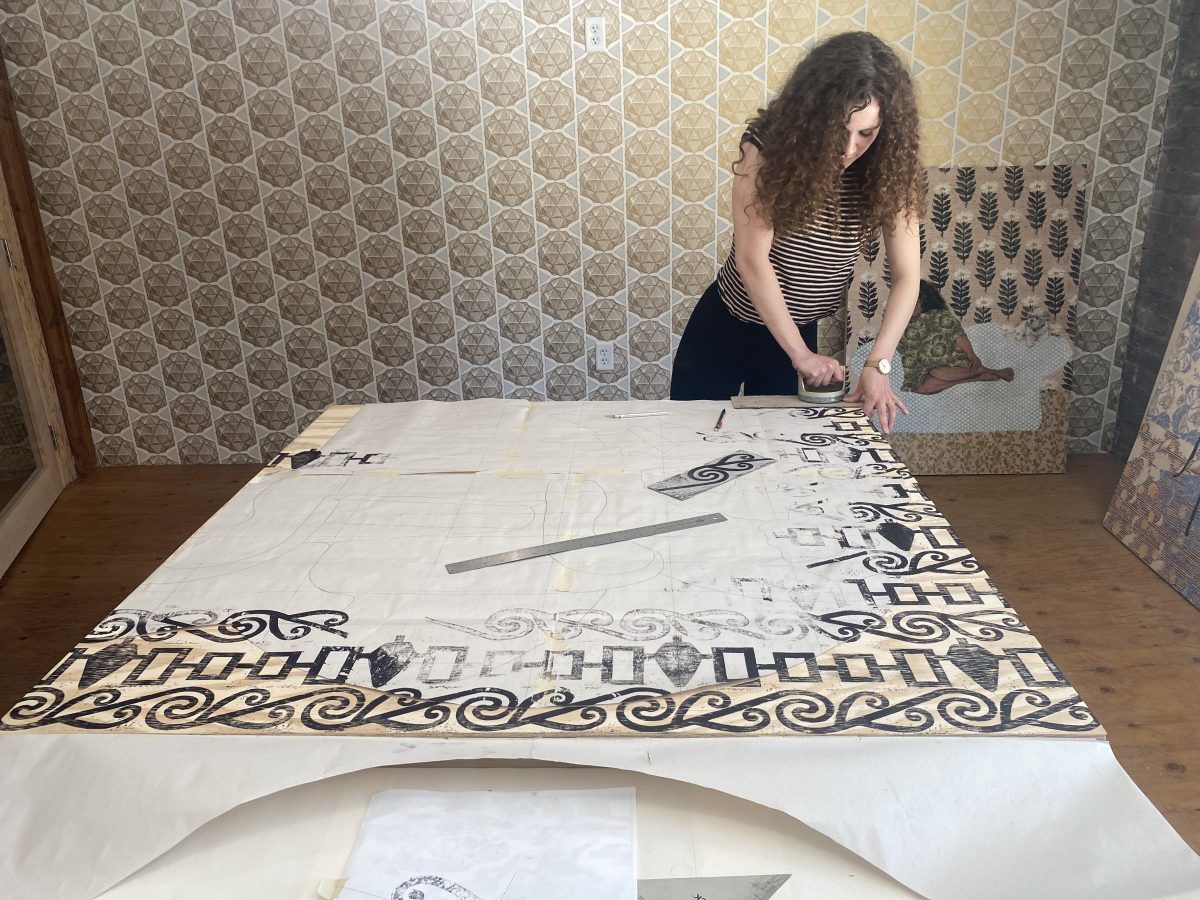 Her second excellent choice was whom she chose to marry. Far too often, artists choose to marry other artists, which feels great for someone who is used to feeling alienated, but has finally met a kindred soul. What both artists really need, of course, is what’s come to be called an “art wife:” a person of any gender (and there are many genders) who can feel fulfilled taking care of them and looking after their mundane as well as their professional needs. So clearly not another artist. Yet a more accessible and even better choice is to take up with someone like Lehmann’s high school friend Ben. Both the spouses were born in Provo and educated through the public schools, and she remembers his having always been there, in her classes. However, they did not become friends until high school. They bonded as seniors and decided to navigate life together as equals. His avocation in finance allowed him to do two things: keep his passion for art on an amateur level, and support an artist-spouse whose art would never be a hobby. She credits his aesthetic judgment as deep and indispensable, and as proof of his intentions, recalls his decision to revise his major in order to appeal to a wider set of potential employers. Thus far, their approach to seeking out interlocking opportunities is working, and both are able to operate as adults in a relationship of equals.

It says a lot about Aïsha Lehmann that so many of the milestones along her path have been people she remembers as not just influences, but friends. She credits Rachel Henricksen, a fellow student two years ahead of her in high school, for having encouraged her interest in art, a connection that continued after they graduated and began following parallel careers. For a telling example, Henricksen’s recent exhibition at Bountiful Davis Art Center, at the beginning of October, opened a symbolic two weeks before Lehmann’s Finch Lane show. Lehmann also credits James Rees, Design and Visual Communication teacher at Provo High, for invaluable support at what was a vulnerable point in her life. 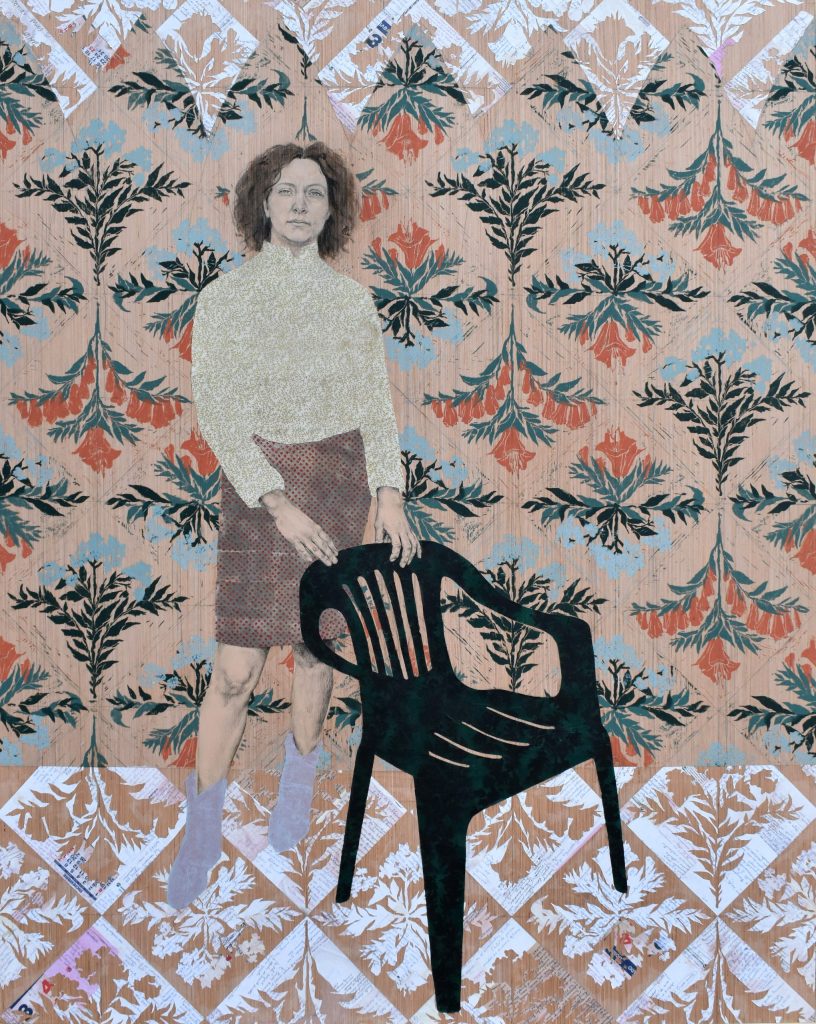 In “Sage” (2021, mixed media, 60 x 48 in) the stencil patterns that were used to apply paint in a floral array were also used to cut out writings of Sage’s that were then collaged into the background.

The pressures acting on her once in college were individually subtle, but acted synergistically so to be beyond sorting out now. From the beginning, she’d always known that her parents are first generation Americans, of German-Swiss origin, but that her maternal grandmother is Black. In fact, her grandmother was the sole member of the larger family who accompanied her daughter and son-in-law to their new home, where in time she became a fixture in her granddaughter’s life, as grandparents uniquely can. As this was her environment, or perhaps because they lived where racism wasn’t the issue it is in some places, Lehmann never thought much about it until she began to swim in a larger pond. Then the social science classes she began taking piqued her interest in matters of color, and an especially selective Civil Rights Seminar that required her to disclose her background brought that interest to the fore.

While her now-continuing pattern of alternating and balancing Fine Art with Sociology was taking shape, her next influencer turned out to be BYU painting professor Fidalis Buehler, her thesis adviser, who is well known in the Utah arts community for foregrounding what he carefully identifies as his Euro-American/Pacific Island history. They clicked, and the eminent activist and ambitious older artist helped her clarify her artistic goals, including reaching out to galleries. 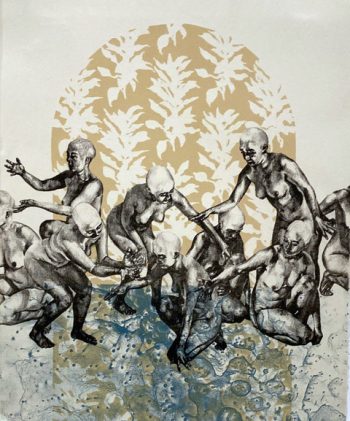 In a strikingly original variation on the timeless theme of Bathers, women of various ages and indefinite ethnicity gather before an ornamental background drawn from nature, where they share a lively spring, symbolic of water’s gift of life. Tradition calls it a fountain of youth, but the title “Fluidity” suggests instead an unending cycle of renewal.

The timing was right. At Modern West, Diane Stewart and Shalee Cooper were envisioning an Artist-in-Residence program, and Lehmann became one of their first AIRs in July and August of 2021. Thanks to the Front Runner, she was able to commute from Provo to the gallery in Salt Lake, where she primarily worked with gallerist Chris Woodward. He says he was equally impressed by her learning and her intuitive way of working. Scout Invie, who joined the gallery staff shortly after Lehmann’s residency and has worked closely with her since, listened to her explain how the manifold details of the Mixed figures and their settings emerged from both her extensive interviews with the models and her recent factual research. Invie likes to point out that some of the deeply layered materials in the ornamental background, such as can be seen behind “Sage,” are copies of documents written by the model. Often extensively pre-determined artworks end up looking lifeless and overworked, but among the linoleum-cut printed clothing and backgrounds, the arms, legs, and especially the faces of Mixed are freshly drawn by the artist, which gives them a spontaneous and authentic look, like they have just come into being, or are still arriving. 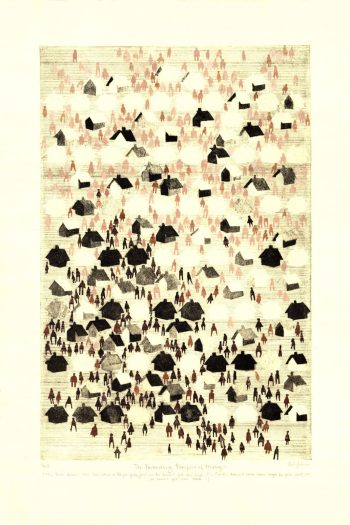 The work that emerged from the residency included a medium for which Lehmann has voiced a strong preference: printing, specifically in this case intaglio, with such extra dimensions as collage, ink, and graphite. These works include a series of metaphoric documentaries on Black/White relations, which take the form of bird’s-eye (or today, drone camera) views of communities, comprised of what look like Monopoly houses, that are tinted to reveal who lives in them. Their titles recount the folklore of Segregation in dated language, like “No. 2: The Foreboding Prospect of Mixing.” (“The South doesn’t care how close a Negro gets, just so he doesn’t get too high. The North doesn’t care how high he gets just so he doesn’t get too close.”) Variations explore both the emotional response to, and the reality of, mixing.

Good and bracing as these prints are, Lehmann says what really appeals to her now are wood block and screen printing. Wood blocks have a long history and are known for their versatility, while screen printing (or serigraphy) is primarily associated today with Andy Warhol, who liked the results for the way he could poise them between the industrial and the provisional. Some idea of what they can do for Lehmann can be seen in her current show as the Southern Utah Art Museum in Cedar City. Here, although she’s still focusing on the value of identify in mixed populations, she’s taken a contrasting approach. Instead of calmly, but self-confidently confronting the viewer, as they did in Mixed, these figures so completely ignore their voyeuristic audience that they become essentially invisible as they go about their ordinary, albeit self-revealing activities.

Despite her youth, a relatively late start, and the intervention of a world-wide pandemic, Aïsha Lehmann has shown herself to be an artist capable of an original vision who is fearless in carrying it through. In addition, the sheer skill with which she envisions and realizes her complex visions shows that she is truly an artistic force to be reckoned with, appreciated, and closely watched. 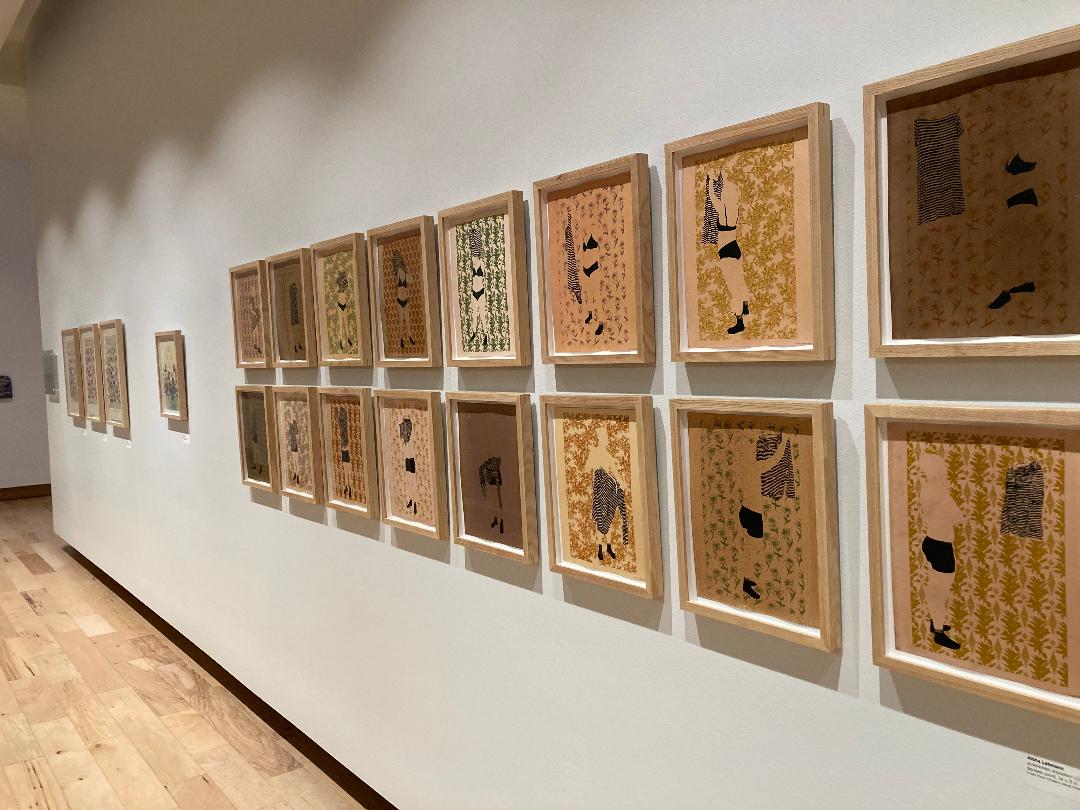 Lehmann’s current exhibit at the Southern Utah Museum of Art in Cedar City, features her printmaking works, including this miniseries in which an individual considers and dons a striped shirt.