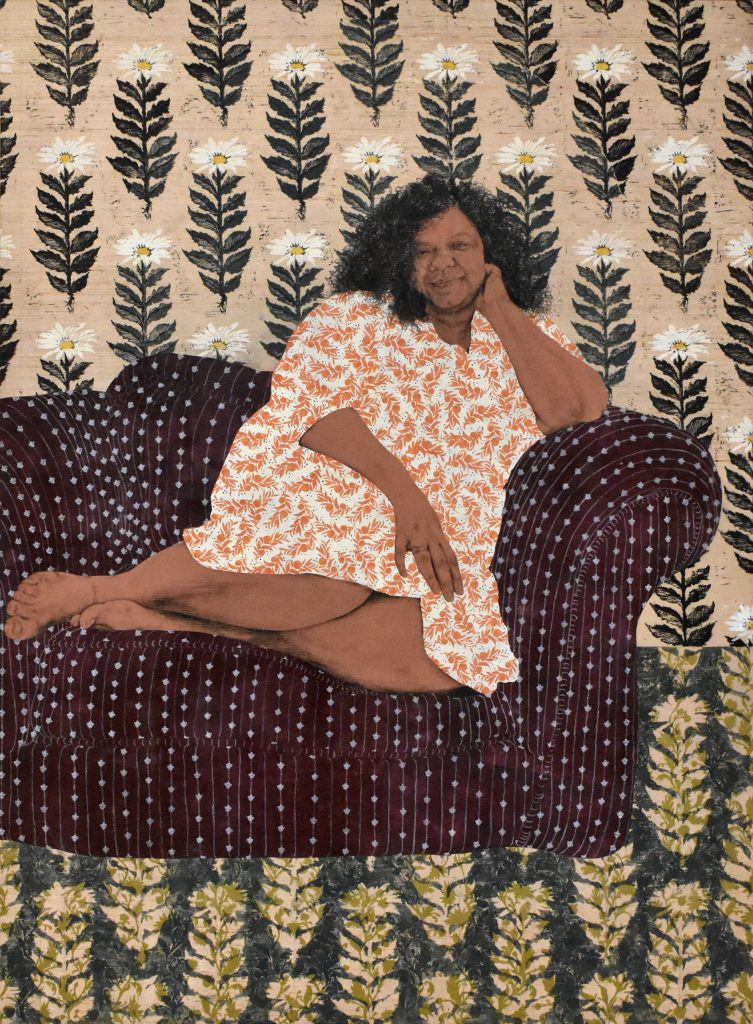 The homey domestic character of Finch Lane Gallery, with its fireplace and wall of windows, contributes to the feeling that the people Aïsha Lehmann’s presents are our hosts: they’ve invited artist and audience to join them in a uniquely civilized gathering. Surrounded by their colorful, intricate wallpapers, coordinated floors and clothes, these nine persons — Sage, Ashley, Liam, Jake, Lexie, and four who choose to remain nameless — generate a contemplative mood that allows us, their live companions, to escape for a while from the tensions and conflicts that exist, seemingly everywhere, outside the gallery’s peace and calm.

The terms “people” and “persons” are used here because the technical terms, portrait and figure, seem wrong in Lehmann’s case. Her subjects fall somewhere between those two categories. Ever since the Romans, a portrait has been presumed to depict an individual, where possible recognizably. Several of Lehmann’s subjects do not show us their faces. On the other hand, a figure needn’t be identifiable, since what communicates the most in a figure is the posture. In “Jake” and in “Lexie,” we have both identity and posture: Jake in his rocking chair, gripping the chair’s arms, and Lexie curled up on the love seat, with the knuckles of one hand touching the side of her neck. Come closer, though, and their faces, their hands, Lexie’s bare feet, and Jake’s elaborate tattoos all come into focus. Here the mixture of media plays a role in dividing the “portrait” from the “figure.” The features are drawn in pencil, closely observed and rendered in near-monochrome, which contrasts markedly from their bodies, which are dressed almost like a coordinated extension of the brightly-patterned backgrounds. 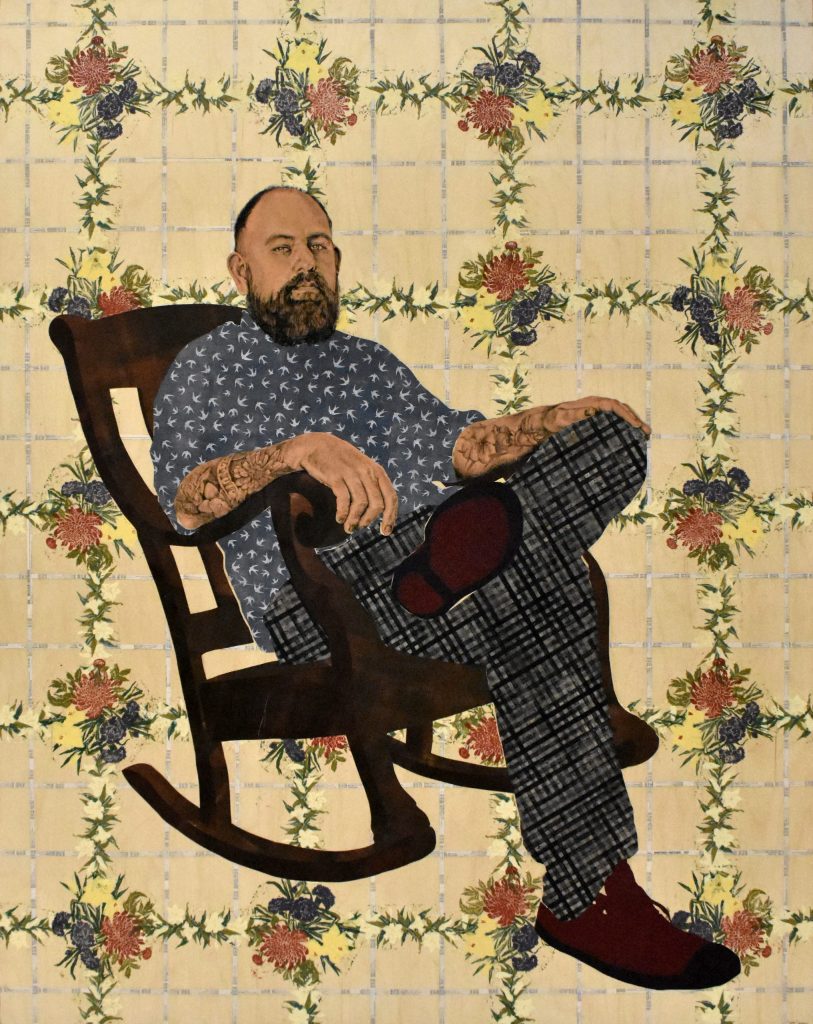 Those backgrounds provide one of several meanings to the show’s title. Mixed media has become an all-but indispensable choice in today’s artist’s tool belt: so much so it often feels redundant to mention it. Lehmann, though, insists her viewers notice the mixture. The physical construction and layering of her compositions remains visible. She makes elaborate use of linoleum printing, which is a sophisticated version of the potato prints that children make in school. Her fabrics are often shown without perspective, as if stretched out flat — an illustrator’s trick. She layers her media, often in reverse, with what belongs in back instead being placed on top. She does all this deliberately, shaking up conventions to show what beauty she can create by doing so. And in her statement she tells us why: that her point is to question the way status is assigned, not only in art, but by extension in life as well — as we will see soon enough. 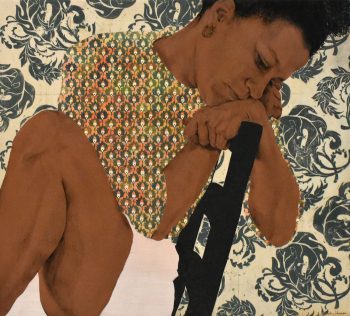 Where Jake and Lexie directly return the viewer’s gaze, one of the untitled figures wraps herself around her ladder-back chair and rests her head on her hands. If part of the artist’s intention was to show the impact of racism on her subjects, or on the other hand, to show them as possessed of thoughts and feelings the equal of any historical portrait subject’s, that is most visible here. Invading this woman’s privacy to reveal her inner life without exploitation is challenging, but here we might just accomplish it. Something similar happens in “Liam,” here with a man whose averted gaze suggests an inner pain. Where most of the environments are botanical in nature, Liam’s geometric pattern, with its spear-point motif, suggests an additional layer, such as an underlying gender identity conflict.

Two full-length figure-portraits show the interaction of facial expression and posture, the first by contrast and the second by reinforcement. In “Ashley,” the seated figure has her legs crossed, one hand holding an ankle, and rests her face on the other hand. These are generally accepted to be defensive postures, as might be expected of someone who knows she is being studied. Ask this person a question that requires thought: their eyes will probably swivel to one side or the other —  each person has a customary side— and quite likely she will look up as well. Averting her eyes like this to reduce distraction shows she is thinking. Lehmann has said that she began these portraits by interviewing her subjects; here we see the reality of that, as Ashley demonstrates the classic reaction to being asked a question that requires her to search her mind. 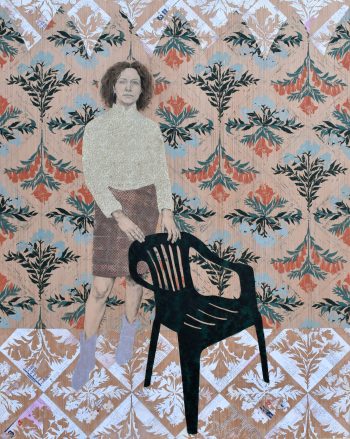 The other person is Sage, who most directly confronts the artist, and through her the viewer. She stands as if firmly rooted, facing directly out of the frame, her fingers resting on the back of a chair that she does not hide behind. Her expression gives nothing away but her awareness of our presence. She asserts that she is her own person, not an accessory to anyone else. The profusion of flowers suggests Spring, the time of year when new life and new opportunities predominate. Yet while the drawing of the faces, hands, and feet here are remarkable and convincing, their setting, like the settings in which jewels are placed, is just as important. What all the works here are trying to demonstrate, with their innovative and pleasurable mixture of techniques, is a parallel between mixed media and mixed races: that just as the hegemony of singular, allegedly superior medium — oils on canvas, or printing on the press, or watercolor on paper — should no longer be thought the only way to make art, so the exclusive status claims of any single race of people should be rejected in favor of something like freedom of association. Neither ‘archival’ technique nor present social relations should be mistaken for permanent.

There are some challenges that come with this program. Some will say that art is a visual and not a conceptual medium, and can only prove durable when it is not associated too closely with an external, verbal argument. Throughout art’s history, the works that have lasted are those that can be adapted according to the changing needs and desires of an evolving audience. Artists whose works last have generally refused to tell their audience exactly what their art means, with the result that each new generation has been able to own that art and to find in it the message they need to hear. The arguments that Lehmann makes in her statement are absolutely correct today: the superiority of light skin over dark and the importance of racial purity are lies and frauds that have always served the powerful. Ever since the discovery of DNA, researchers have known that there is, simply, no such thing as race. Yet art by itself cannot state these things as clearly as Lehmann does in a couple of paragraphs of prose. While she means to liberate races to a new freedom, what she may well end up doing instead is to enshrine a mistaken idea of human nature. While Lehmann’s desire to dethrone one dominate group in favor of equality is a move towards progress, it should not be forgotten that the ultimate goal is a world without the illusion of meaningful differences between any human populations.

What are called races today are the results of selective breeding: self-selection for the most part, but enforced breeding when seen as necessary by one group on another. What we see, and what Lehmann’s wonderful people demonstrate so nobly, is nothing more than family resemblance writ large. Fortunately, after future audiences have forgotten the verbal arguments that rage today, for and against the preservation of a myth, there is an excellent chance that these images, like those Paul Gauguin painted in Tahiti over a century ago, will be welcomed for themselves, not as proof of any ideology, but as part of a larger portrait of the human family. 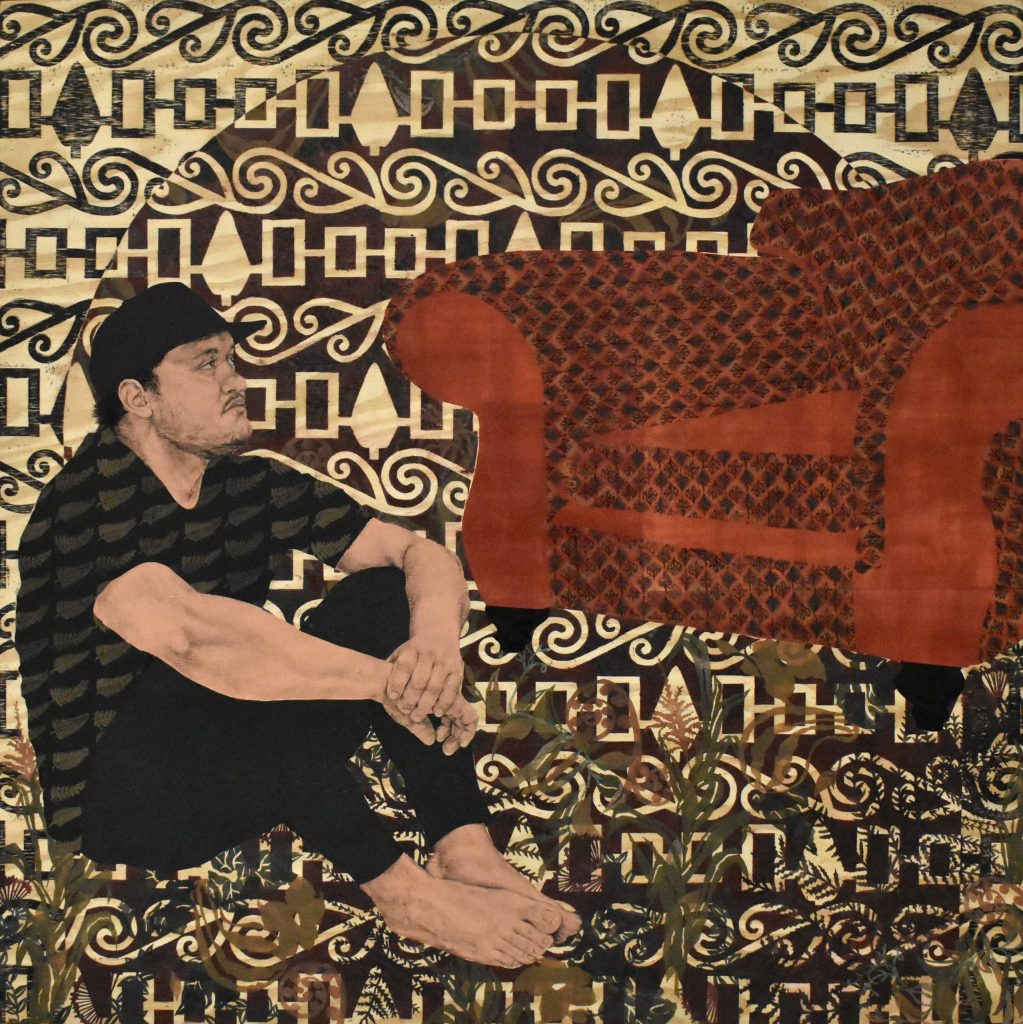