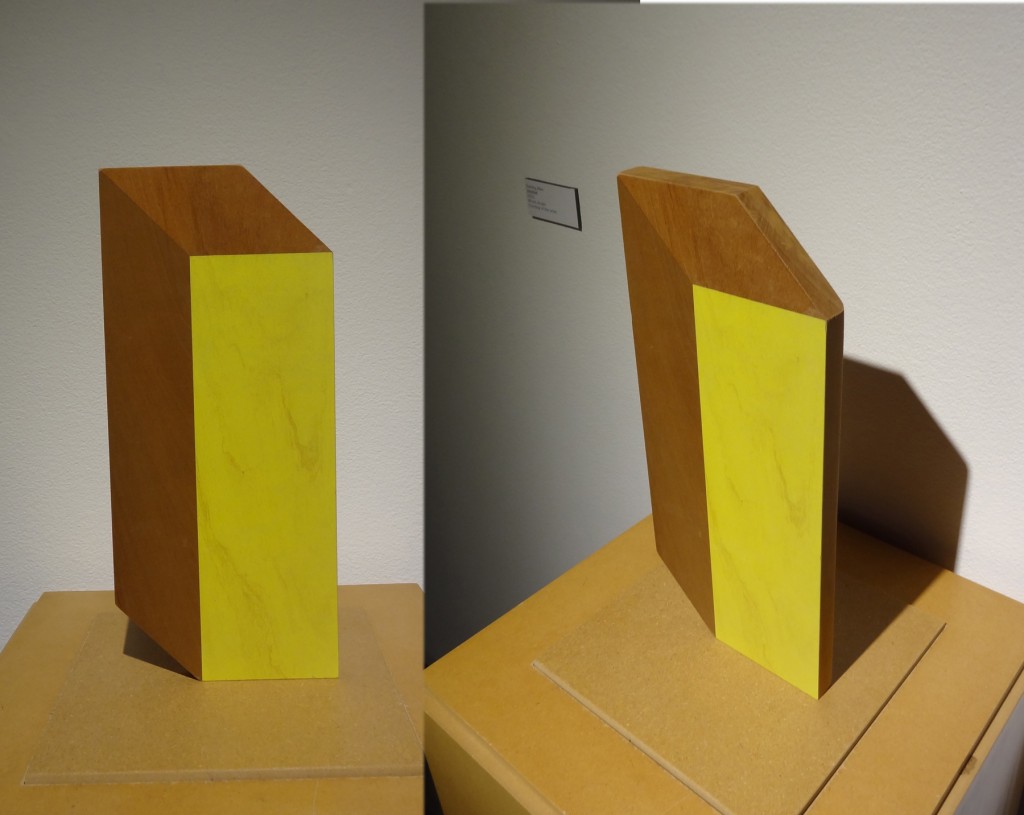 Contemplating Karin Hodgin-Jones’ two remarkable machines, both titled “Tug,” what may well come to mind are the unquenchably popular inventions of Leonardo da Vinci: the ornithopter and the aerial screw that couldn’t fly, the parachute and the diving suit that would almost certainly have killed their users. Each was so much more beautiful than practical. The difference is that Hodgin-Jones knows her contraptions have no practical application; indeed, she means them as expressions of a kind of passivity bordering on futility. Nevertheless, they would have intrigued Leonardo, once he got past the novelty of seeing art in a public space dedicated to displaying it. “Tug (Peaks and Valleys)” should have delighted him, as it did the visitors in the gallery they day I saw it. The triangle section at its top recalls the weaving mills seen in so many filmed versions of 19th century, social realist novels. Resting on a horizontal wooden frame, a web of strings runs through an array of pulleys and levers that, driven by a concealed motor, create a constantly shifting, utterly hypnotic display of Euclidian geometry. From there, strings drop straight down almost to the ground, where each is attached to a spot on a flesh-colored square of lightweight cloth. They lift this fabric into peaks that rise and fall in response to the pulling strings, suggesting the surface of lake water in a storm, yet in stately fashion, like a slow-motion film.

The hypnotic beauty of that dancing bit of cloth takes on an ironic, even bitter humor in the context of Adjunct, a collection of ten gems at UMOCA, some in multiple parts, brought together to call attention by means of visual metaphor to a plight shared by their creators, as well as by thousands of others like them. These four artists, then, have two things in common. First, all are competent, productive, functioning individuals whose careers give the lie to the myth that artists are inherently unstable fringe dwellers. And they do so while laboring on behalf of the world’s most wealthy, culturally indifferent society, hoping to achieve success in a market that, to a degree unequaled in art history, operates on a winner-take-all basis that sees a handful of artists and works garner millions of dollars, while most artists can’t even make a living. Second, while all four have in common one of the most familiar means of supporting themselves and their art work—teaching—they are forced to get by without the perks and protections available to their colleagues who, regardless of relative artistic merit, have landed that increasingly rare and endangered haven, a full-time, tenure track appointment.

Some of the most important academics in America are adjuncts at old-fashioned schools that still recognize the value of peripatetic scholars, not attached to committees and revolving departmental chores, who can take full advantage of research opportunities and resources, while providing students early exposure to accomplished public figures. Most adjuncts, though, are temporary hires, paid near or below minimum wage, denied routine benefits like health care and retirement, and regarded for the most part as an unwelcome necessity. As much as any other marginal employment predicament, there is much that can be said about the plight of adjuncts. Yet the pressing question for now is what a work of art should, or even can, have to say about it. Just because some adjuncts are artists doesn’t make employment amenable to explication in visual or aesthetic terms. 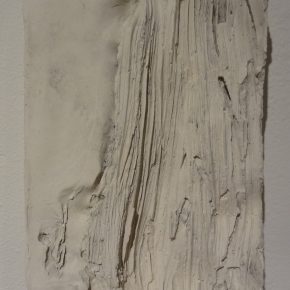 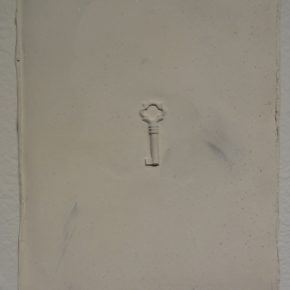 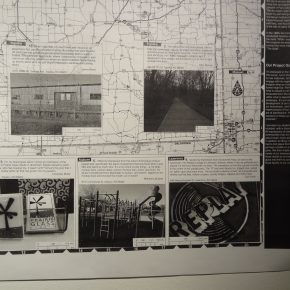 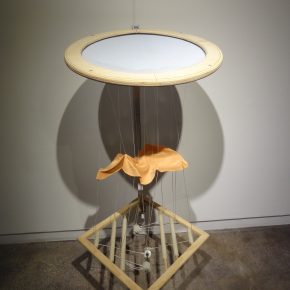 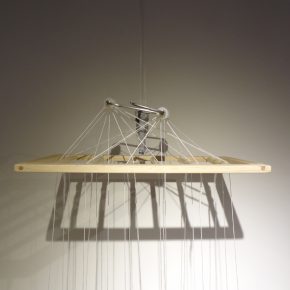 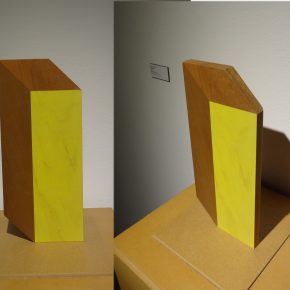 At one extreme, Marin Abell’s entire career cries out for the protection afforded by tenure even as it demonstrates the virtue of independence from institutional risks and constraints. Abell’s populist approach, involving loyal assistants in idiosyncratic actions, such as unleashing hundreds of ping pong balls to disrupt mundane activities, suspending sheets of blue plastic over a green field on a windy day to turn a meadow into a lake, or exercises in futility like constructing a bike that goes backwards when pedaled, could at the very least expose him to charges of triviality from insensitive onlookers. Yet “An Inside Out Mine Tunnel” stands as a model of student involvement in a project by a visiting artist. Present are various levels of artifact, from maps and methodological examples to completed projects, of a plan to make students intimately aware of their environment as they probably haven’t been since childhood. Not only that, but the principal product, a unique, colorful glass slab made by the student from recycled material individually gathered and indelibly stamped with the form of a topology significant to the maker, argues for what likely will prove a lifelong connection between school and student. Even more significant from the points of view of enrollment and fund raising, it’s hard to imagine those who see these opulent talismans not wanting to try this magic for themselves.

From a philosophical point of view, the artist whose work says the most about the predicament of the adjunct is probably Sterling Allen. His ongoing research into two- and three-dimensional visual experience has made him familiar with an array of perceptual illusions: illuminating instances where the superb analytical skills evolved in the brain to enable it to make sense of the immediate environment can still get it wrong. Surely the cognitive dissonance that comes from spending a couple of decades and tens of thousands of dollars on an education, then seeking a job and, while getting the work of teaching, coming to the realization that you still don’t have the job, bears a strong resemblance to the ambivalence of an optical illusion. The loose mimicry of “Pallet Jack” and the textbook illustration of “Untitled” are both about point of view. Stand at one place and to you it appears real; those looking from anywhere else see it very differently. The only available solution is found in the three untitled, digital photographs of Allen’s studio, where he demonstrates his command of all the points of view at once. Whether failing to ride a bike backwards or to see through an illusion, only the powerless truly understand power.

Jill Bedgood’s 25 cast plaster books, collectively titled “Book of Hours: Intervention,” each with some plangent object in relief on the cover, bring into focus how the long human past, when scientific ignorance left anyone suffering from illness nowhere to turn but religion, contrasts with recent history, when the rise of scientific medicine has robbed treatment of the emotional, psychological, and spiritual dimensions with which suffering saturates the patient. Anyone puzzled by the connection between this dilemma and adjunct teachers needs to observe a commonplace difference in teaching styles. Regular faculty, for a variety of reasons, are more likely to deliberately maintain a remote and aloof connection when teaching, while adjuncts are well known (and widely appreciated by students) for rolling up their psychic sleeves and engaging their charges on a more personal level. The damaged, shopworn quality of Bedgood’s books reflects many adjuncts feelings of having been intimately involved while others, better paid and honored, have skated over the hazardous depths.

The autobiographical content of the works in Adjunct is only one of their qualities, and neither the first nor the most important. What can be said about adjuncts in 21st-century is a fragment of the human condition. And their aesthetic qualities? Just as “Book of Hours” employs recent advances in mold-making technique and casting materials, Sterling Allen’s photographs take full advantage of digital advances, and “An Inside Out Mine Tunnel” capitalizes on new ways of displaying information graphically, so Karin Hodgin-Jones’ “Tug (Float),” with its dual, active and passive membranes, takes advantage of a seismic change in art making. Like its companion piece, its mounting and lighting are part of the artist’s intention, a part of the work that breaks traditional boundaries of art and integrates it into the real world. And that’s arguably why talking about adjuncts in this context matters. It isn’t an academic debate; teachers, like artists, are proverbial canaries in the coal mine, and their fate is a vital matter for the world beyond those ivy-covered walls.