A Kinder, Gentler Tarot, with a Utah Touch 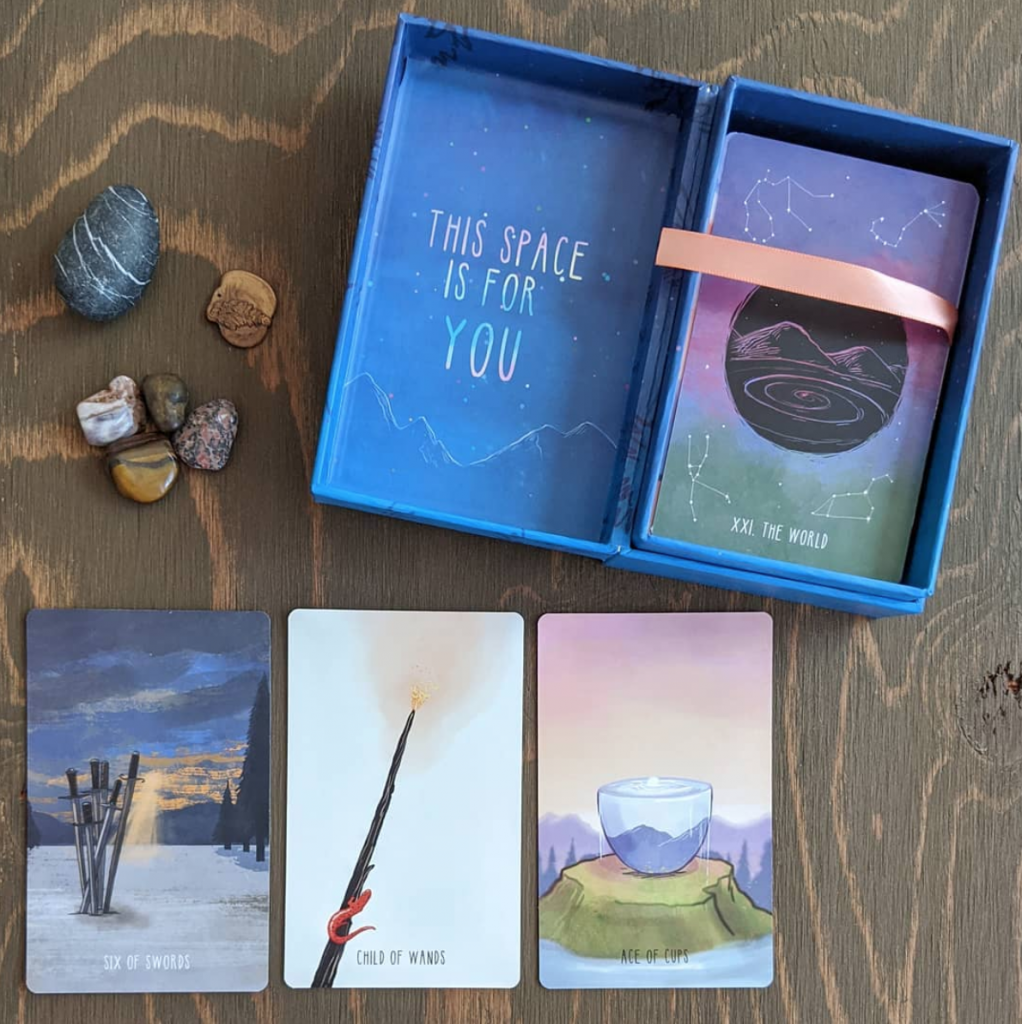 I have been lusting after this Tarot deck for a couple of years now, ever since I saw it on an Australian website I follow, Two Sides Tarot. I couldn’t afford it but loved that it contained lots of little landscapes that looked like Utah (and no court cards, no people at all: no Empress or Hanged Man or Hermit or any of the usual folks in a Tarot deck). Western Australia, Ken Sanders informed me at his book shop when I mentioned the deck, looks exactly like it does here. But I was SURE this was Utah scenery — and didn’t know why.

When a second edition of The Spacious Tarot came out last month, I Googled the deck. Turns out the creator, Carrie Mallon,  lives in Salt Lake City, literally just a few blocks away: when we connected via email I learned she sometimes walks her dog past my house. That is synchronicity on a global scale. 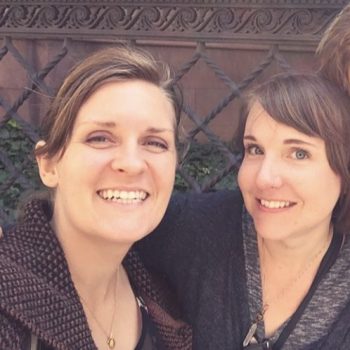 Mallon isn’t the artist, that would be Annie Ruygt from California, but they collaborated on the cards and Mallon is Utah born and bred and had plenty of input on the illustrations. “I’m so happy to hear you resonate with the deck,” says Mallon, when we connect via email. “You can definitely see the Utah influence in some of the cards, it does make sense you would connect with that as a fellow Utahn.”

Tarot cards are old, dating back to 1430s Italy, but weren’t used for occult or fortune-telling purposes until 1780 in France, according to David Parlett’s Encyclopaedia Britannica entry. Prior to then, they were merely playing cards (and still are in some places). In 1910, Arthur Edward Waite commissioned artist Pamela Colman Smith to make the tremendously popular Rider-Waite-Smith deck, with all the cards illustrated and much easier to decipher for a reader, and tarot as divination took off. That deck influences most decks made since – including The Spacious Tarot.

“The cards of the major arcana have pictures representing various forces, characters, virtues, and vices,” Parlett explains succinctly. The 22 cards are numbered I through XXI, with the fool being unnumbered (“You are the fool,” says Mallon) and have names and symbols such as magician, star, strength, wheel of fortune, emperor, and so forth. The cards of the minor arcana, 56 of them, are divided into suits, similar with those of modern playing cards. There are four court cards and 10 numbered ones.

For divination, each card is given a meaning. The cards of the major arcana refer to spiritual matters and important trends in the questioner’s life. In the minor arcana, wands (or clubs) deal mainly with business and career, cups (hearts) with love, swords (spades) with conflict, and pentacles (diamonds) with money and material comfort. The deck is shuffled by the questioner, the reader lays out some of the cards in a pattern (or spread). A card’s meaning is impacted by its position in the spread, by nearby cards and whether it is upside-down. 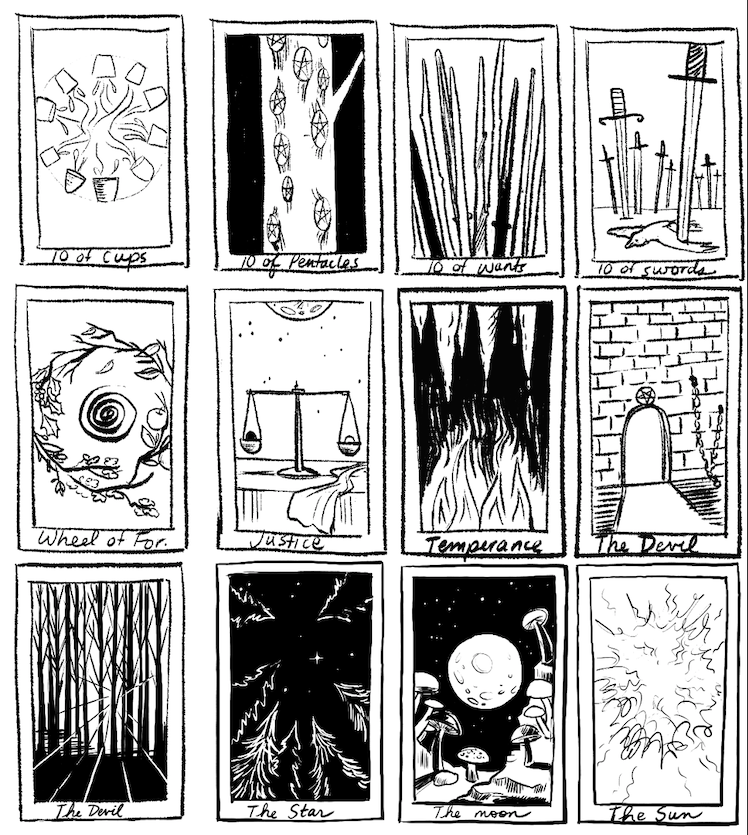 But that’s not what Mallon and Ruygt had in mind for their deck. You can “read” their cards, yes, but artist Ruygt wanted a deck that “felt like I was going into my unconscious. The stuff I’d seen in the stores didn’t really interest me.” For Mallon: “At the core of what tarot is, it’s 78 cards that map the human experience. Every sort of emotion you can have as a person is there. Even if you don’t know tarot, there’s an intention when you see a certain image, it evokes a certain feeling, puts you into a certain way of feeling, so essentially you can start with any one of those images and find out something about yourself. You don’t have to pull the Hermit and think it means XYZ — you can just pull the card and find something interesting to discover about yourself.”

The Spacious Tarot, which comes with one of the best explanatory booklets I have found — offering a short history of tarot and this particular deck’s origins, a basic numerology framework for the numbered cards in the minor arcana (the court cards are dealt with separately), reading reversed cards, bonding with The Spacious Tarot, and, essential, a meaning for each of the cards. “Part of why I was able to go a little more in-depth with the booklet was because we published independently, so we got to make all those decisions on length and so forth ourselves,” Mallon explains. 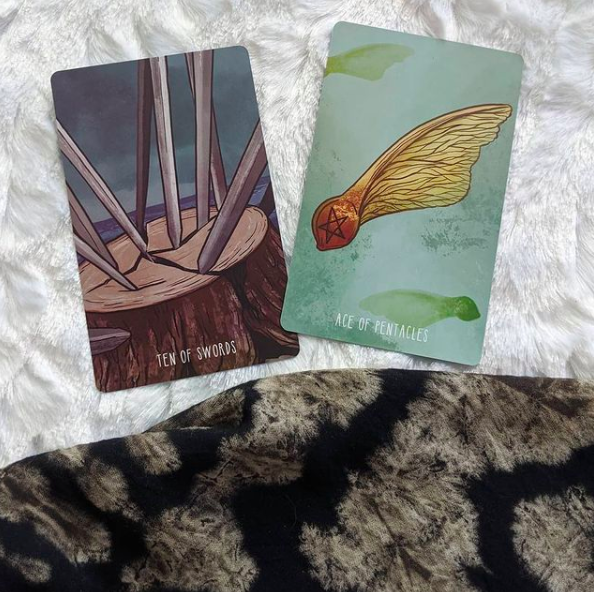 It does seem to be a gentle deck. For instance, I pulled the Ten of Swords when I asked about the day ahead. Normally one of the worst cards in the pack, it signifies betrayal, coming to a bad end, that sort of thing. But Mallon’s interpretation is that this card means you should “differentiate between melodrama and real concerns.” She writes that, “Thinking critically about your situation is useful but make sure you are not overreacting.” (As to how things went for me, well . . . let’s just say both interpretations seemed true. It was a terrible, horrible, no good, very bad day and I wished I were in Australia.)

Born and reared in Tooele (her mother was a teacher — which is what Mallon aspired to be — her father worked for the government at Dugway). Mallon graduated from Tooele High in 2003 and then attended the University of Utah and earned a degree in human development and a double degree in consumer and community studies. “Everything felt like a series of things lining up,” she says. At the time she was in college she thought she wanted to work with Local First Utah and plug into area businesses, but got a tarot reading at Golden Braid bookstore and was told there to change her major and “be something more creative and original.”  While working at Western Governor’s University doing enrollment, she “woke up” and found that “tarot gave me a language to understand things that were happening in me; that it could help you understand yourself.” She bought the Rider-Waite-Smith deck in 2010, began reading for people in 2013, “kept going and going” and by 2014 tarot was her full-time business. “My spouse has a full-time job,” she points out. In 2016, Mallon started talking on her blog about creating a deck and Ruygt, who had been using the blog extensively as a resource, offered to create art for the website in exchange. Both women learned that they had been thinking about creating a tarot deck and discovered they had similar visions of what the deck might represent. 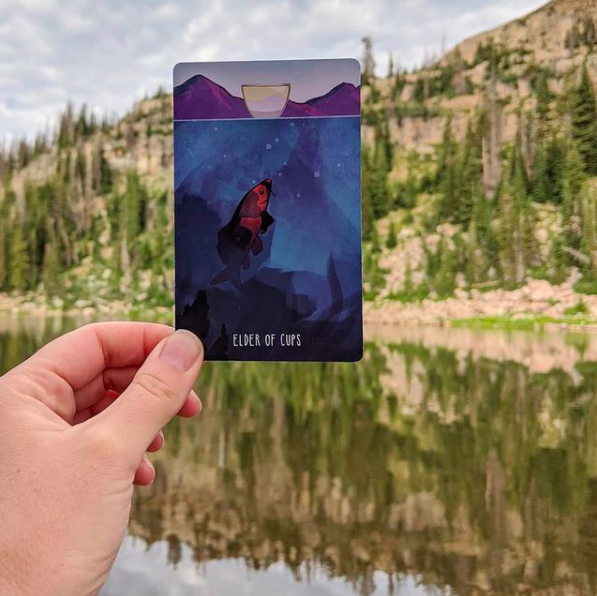 Annie Ruygt grew up in Napa and was an illustration major at Cal State Fullerton. She always enjoyed drawing and singing and even worked at Disneyland for a couple of years – an environment she loved. She self-published a few children’s books and now has one coming out in April from a commercial publisher. Ruygt met Mallon online when she was working in tech in the Bay Area. She was laid off, moved to New York City and there the two met in person for the first time and worked feverishly on making The Spacious Tarot a reality. Ruygt would move back to Northern California six months later (it was all she could take of Gotham, though she found it “inspirational”) and continued working on finishing the deck and on boosting her free-lance art career. “Five years of moving around. My pilgrimage,” she says with a sigh.

“I had been fantasizing to do the deck,” Ruygt says, “and then Carrie reached out to me with the same idea. It felt like the universe was bringing us together. It doesn’t have people. I was somewhat new to tarot when we started, and I liked that the imagery was telling of the symbolism without me having to have the knowledge of the symbolism. I learned a lot about tarot by creating the symbolism and I didn’t know that much about it before. I feel like I can do readings for people based on what I learned about the colors and texture and visual imagery to explain the meanings of the cards because I didn’t have that symbolic knowledge of the original tarot.” 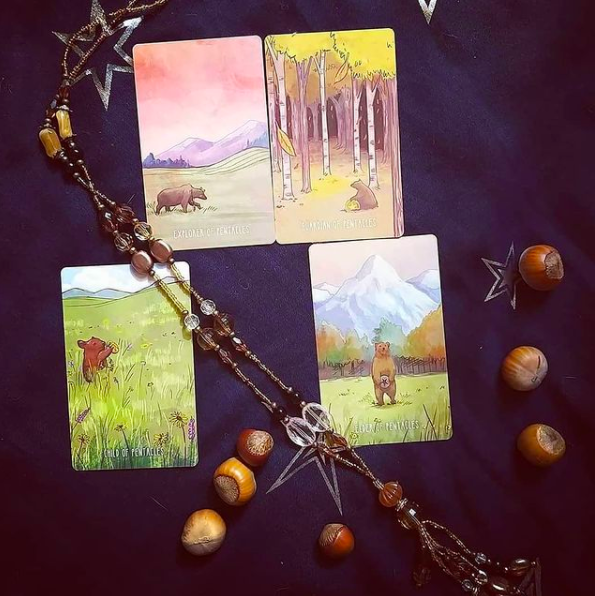 Of their collaborative effort, Mallon says, “I’m the tarot person. I came up with most of the card concepts and wrote the guidebook. Annie is the illustrator who brought everything to life! I would come up with the general concept of what the card should look like; the Utah scenery just sort of happened.” Ruygt recalls Mallon telling her, “There are these trees we have here in Utah, and I think we should incorporate that.” Mallon says, “Yes, Pando! It’s the Three of Pentacles. I wrote a bit about it in the guidebook.” The Pando aspen grove near Fish Lake in Sevier County covers 106 acres and is the largest aspen clone, “and the most massive single living thing known on Earth.” It is united by a single root system and could die soon because deer are eating all its new sprouts, preventing it from regenerating.

“Sometimes Annie would make the colors and composition work and come back with a version of it; sometimes we would do a card a couple of times, the longer we worked it was almost like we could read each other’s minds. The longer we worked the better the collaboration came forward. It was magical,” Mallon says. The court cards took a little more effort, she recalls. “It’s more natural for people to read them if there is a creature there. It came down to my gut feeling as to the essence of that animal. Pentacles are about the Earth element. Bears hunker down for the winter. Very earthy. Crows fly; the air element, and they are very smart. It came down to, ‘Does this make sense to me?’” 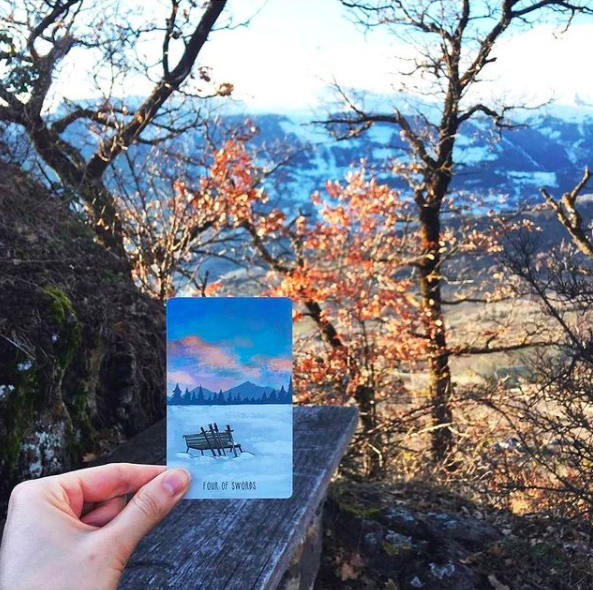 Says Ruygt: “Carrie and I set out to create this world together and we didn’t know what it was, but we continued to join our minds and our intuition and the world is very much mine and very much hers …”

It’s a spacious world I am enjoying now, too. And it didn’t have to come all the way from Australia. But it would have been fine if it had. Ken Sanders is right. Our landscapes are nearly identical. 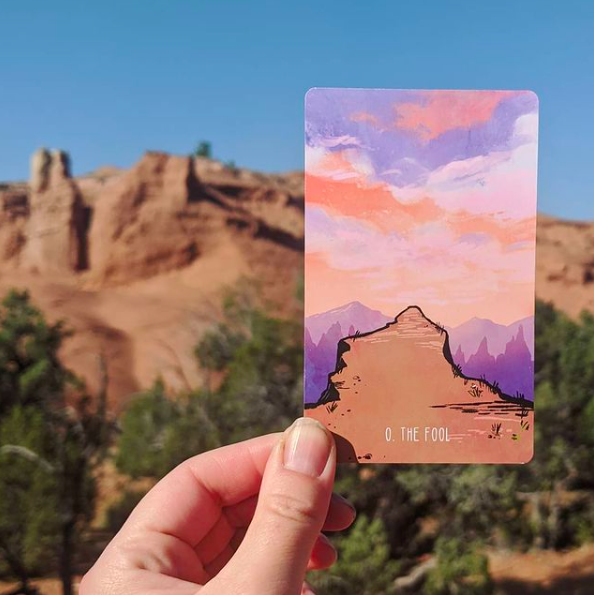 The Spacious Tarot is available online and in Salt Lake City at Ken Sanders Rare Books.