A Bird that Howls: Susan Imhoff Bird’s New Memoir Journeys With the Wolf 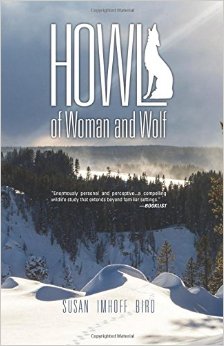 Susan Imhoff Bird’s new memoir, Howl: of Woman and Wolf, has all the depth, complexity, and moving power of that most haunting of sounds: the howl of a wild wolf. Alternately joyful and mournful, lyrical and pragmatic, this hybrid tapestry of memoir and wildlife historiography offers equally keen views of the science and art of gray wolf recovery efforts, the people who love and loathe this highly symbolic species, and the beautiful bricolage of a life lived interestingly: births, loves, deaths, and the search for self-in-place that is the pith of experience. Inventively framed by the epic journey of wolf OR-7, AKA “Journey,” who made history by being the first gray wolf to venture into California since the species’ extirpation from the lower 48 states in the 1930s, this book journeys. Bird shows us that the gap between tameness and wildness, between two highly mobile, adaptable, social, and intelligent land predators—wolves and we, self and other—is not so far as it might seem, and we ought to venture across to find out how wild feels.

Bird’s canine muse is a study in cultural and ecological enmeshment, an ideal exemplar of ardent preservationist John Muir’s observation, “when we try to pick out anything by itself, we find it hitched to everything else in the universe.” Crucial to ecosystemic health, the wolf benefits everything from scavengers like magpies and ravens to trout, songbirds, beavers, willows, and aspen. And the wolf is just as culturally powerful as it is ecologically: whether big and bad, huffing and puffing, stalking hapless young women in red as they stroll through the forest, or viciously murdering dozens of sheep and cows “for sport,” the wolf’s folkloric resonance is as outsized as its effect on ecosystems. If the wolf is a symbol of rapaciousness for many, so too is it a symbol of noble, pure wildness for others, and neither metaphorical vestment may be an entirely good fit. In the end, what characterizes the human relationship to the wolf and to ecosystems alike is complexity: a tangled mass of associations and relations that stretches out in all directions at once.

In this memoir, wolf and woman alike unfold in the fullness of complexity: boundaries are few; connections are manifold. Bird moves effortlessly between searingly heartfelt and honest narratives of marriage, childhood, pregnancy, birth, divorce, travel, death, exploration, conversation, connection, separation, and the fumbling states in between. We learn of the birth and always-fragile life of the author’s son Jake, born with cerebral palsy, and the simultaneous stillbirth of Jake’s womb-mate, Little Joe. Little Joe and “Hoss,” the in-utero name for Jake (the author confesses a fondness for the television Western Bonanza), are yoked together by conception, yet separated by the simultaneity of birth and death. Paradox. Like all the nature writing greats, Bird is after essence: Edward Abbey’s bedrock and paradox, Terry Tempest Williams’s intimacy with land and with folk. What is at the center, and what radiates outward? Where do we fit, and how do we relate? With whom, what, and in what landscape do I—should I—dwell? Paradox beautifully animates the many strands of this deftly-woven braid: the fact that we as a species cannot seem to live with or without wolves, the fact that the very relationships we need (such as a nurturing relation to self) are the ones we run away from, the fact that we are willingly herded into stockpens of meaningless work while craving meaning and wildness, the fact that we live but do not always live.

Alongside Bird’s biographically-rich experiential and existential musings, the author offers a thorough history of the gray wolf, particularly after its 1995 reintroduction to Yellowstone and central Idaho. She parallels and punctuates key moments in wolf recovery with moments in her life: kids’ growth and movement toward independence, her own developing sense of self, needs, wants. Ultimately, we get the story of wolves, well-told, and the effect is an education on a singular animal and an identification with a singular storyteller. Through countless interviews, cast as deeply personal ventures into the making of knowledge and connection to place, Bird offers an admirably complete picture of a creature that seems perpetually to be in the crosshairs of science, myth, and memory.

As Bird reminds us, the kind of field-based ecology on which most wolf science is based is an unbound and often chaotic enterprise. It’s exciting, too, a fact the author relishes as she interviews folks like legendary wolf recovery project leader Doug Smith and others whose lives are fully lived outdoors in pursuit of information about—and connection with—the gray wolf. As befits such a sometimes-swashbuckling scientific style, ecologists often turn to metaphor (think “alien,” “invasive,” and so on to describe non-native species like the Gypsy Moth, the Zebra Mussel, or the Russian Olive, species that are vilified despite their lack of volition in the matter: we are the alien, the invasive, the weed). Metaphorically, biologists often refer to the gray wolf as a “keystone species.” Just as an arch would fall without a keystone, an ecosystem can collapse without the balancing influence of an apex predator.

The wolf is the architect of what biologists often call a “trophic cascade,” or a reorganization of energy in a foodweb. It goes like this: the gray wolf’s presence disperses elk herds. The newly pursued elk leave off their munching of willows to the ground, and willows rebound, creating dam material for beaver. Erosion is subdued by new beaver lodges, trout subsequently flourish, and songbirds return to the aspens, which are recruited in greater numbers when elk stop denuding them. Bird, too, cascades through her many forays into the field and complementary forays within. She gazes at wolves through a spotting scope, rides horses with anti-wolf dude ranchers and hunters, rides shotgun with Montana wildlife managers. She risks life and limb traversing the snowy miles between Salt Lake City and Montana in the icy grip of winter, experiences the exhilaration and freedom of riding a bike on sweeping canyon roads followed by the rude awakening of body hitting pavement, and spins a tale of love that is, I think, worthy of a slow, meditative read punctuated by one’s own journeys outside the comfort zone. 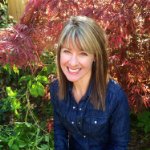 Susan Imhoff Bird finds inspiration in Utah’s stunning canyons, valleys and water-sculpted rock. Traveling in Asia, South America, and Europe has exposed her to varied cultures and societies, resulting in an award-winning short story and a book about humanitarian work in Nepal. A mom of three and owner of a gratitude-based business, she is fascinated by human interactions. When not writing, reading, trying to meditate, or attempting yoga asanas, she can be found on her bicycle or snowshoes, absorbing the wisdom of the natural world. And occasionally howling.

Aaron T. Phillips teaches professional and technical communication in the Management department at the University of Utah. His dissertation research focused on the rhetoric surrounding the reintroduction and recovery of the gray wolf in the western United States. His creative nonfiction has appeared in “Mountain Gazette” and “Cross Country Skier” magazine, as well as in various local publications.