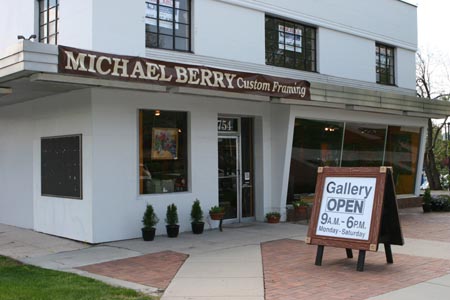 Michael Berry Gallery hasn’t always been a gallery. In fact, two years ago, Berry’s framing business took place in a small 600 square foot room in the back of his, now 2500 square foot operation on 754 E. South Temple. When the floral shop that previously occupied the majority of the space moved out earlier this year, Berry decided to expand his business and turn the front into exhibit space. I asked him if he’s wanted to do this for a while, and surprisingly, he responded, “No. I don’t remember ever wanting to do this.”

Berry claims his friends will tell you a different story, but the truth of the matter is that his loyal clientele of artists have been talking about it longer than he has. 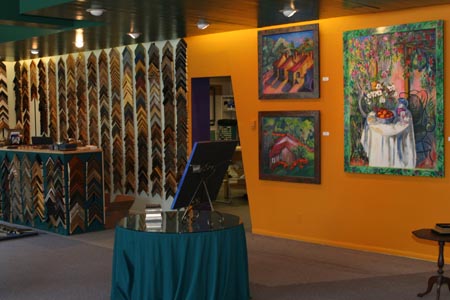 Berry began his framing career working downtown for a photographer for about four years. Not long after, he branched out on his own, running a frame shop out of his house for 15 years. “I imagined my clientele would be collectors, but then I met Pilar Pobil, Willamarie Huelskamp, Kindra Fehr and Rebecca Livermore and they became my major clientele.” The same artists have come to Berry ever since. Naturally, these artists were featured in the first show to kick off the new exhibition space in March 2005.

Berry is an artist himself, but doesn’t have the time for his art he used to have. “I had a short, wonderful art career that came to an end when I moved in here. I have a lot more volume now that people can find me.” His creative outlet now is making boxes out of frame scraps. Visitors can spot these boxes, happily placed about the gallery. 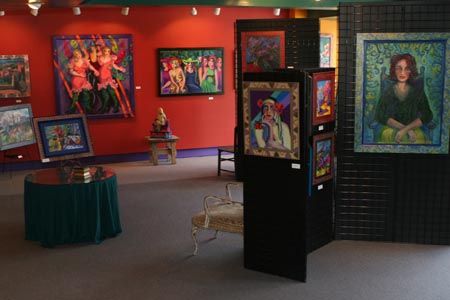 The gallery itself is a work in progress. Looking around, I asked what his plans for improvement were and he answered, “the floors, the ceilings and the walls.” But Berry isn’t too concerned about what the gallery looks like; he’s more interested in the artwork. “I don’t think it’s so important for things to be slick. If things are slick, I start worrying about what someone’s trying to sell me.” He just takes each month at a time, improving what he can as funds allow. As for now, the portable grids work for walls, and fortunately, track lighting was already there for him. “I think this used to be an art gallery a long time ago. I found an ancient framing tool when I moved in, but I don’t know where it is. My employees run the business and they don’t always take my sentimental feelings into account.”

Berry has two employees on staff: Valerie and Ryan. Ryan is in charge of all the “technological stuff” such as email and mailing lists. “He is a young man who goes to the University and knows all about email. He has a laptop and is very current, but he doesn’t understand my equipment.” Berry’s equipment sits idly in a back room, and might be as old as that ancient framing tool he was talking about.

The frame shop and gallery is currently the only business in the building. “I’m just dying for another business to go back there.” The Italian restaurant in the back moved out after a long residence, and the real estate agency upstairs recently moved out. I proposed the idea that he should just buy the whole building and turn it into a huge gallery. He just stared out the window and sighed, “Yeah, wouldn’t that be something.” 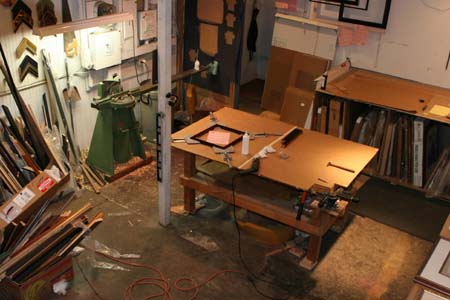 Berry still loves his old 600 square foot “grotto” for the frame building |4|, but enjoys having a bigger presence than before. He is currently exhibiting his second show, “The Magic of Pilar,” featuring a small selection of paintings, sculptures, painted furniture, etc. by Salt Lake City artist Pilar Pobil. He has no formal application process for exhibiting in his space. He simply invites the artists he likes to have a show. “The openings have been the most fun, meeting all the new people and seeing them enjoy and talk about the art. I have a dream of meeting a lot of new artists.” He’s already scheduled the gallery for one year, but he plans on keeping July and August open for a wacky idea – an idea so wacky that I’m not allowed to talk about it until he’s worked out all the kinks.